v Craw-Kan Team of the Week: Frontenac, Colgan, St. Paul - Sports in Kansas 
Warning: include(../includes/bodytag.php): failed to open stream: No such file or directory in /home/kansass/public_html/ks/news/index.php on line 36

Craw-Kan Team of the Week is Frontenac, Colgan and St. Paul. 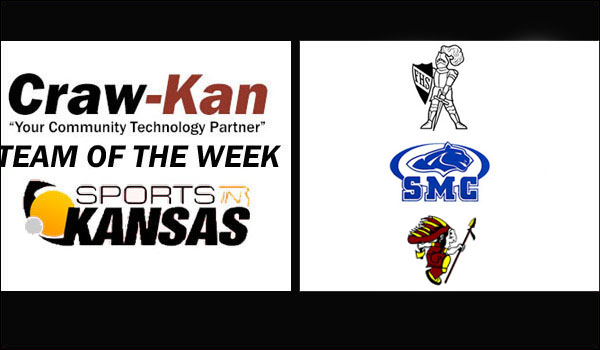 The Craw-Kan "Your Community Technology Partner" Team of the Week from the Southeast Kansas area goes to three teams this week as the Frontenac Raiders (4A-II), St. Mary's Colgan Panthers (2-1A) and St. Paul Indians (8M-I) all punched their tickets to the state title games in football with semifinal wins on Friday. All three semifinal games were also played at home.

The Raiders, led by head coach Mark Smith, knocked off Topeka-Hayden 37-21 on Friday in Frontenac behind a solid defensive performance that included two interceptions that were returned for touchdowns of 90-plus yards by Riley McDaniel and Brendan Ishimura. Jake Wilbert also had over 100 yards rushing in the contest. It sets up a 4A-II title game on Saturday in Salina at 1 p.m. against Holcomb. The Raiders last made the title game in 2000 in 3A. Frontenac is now 7-2 all-time in semifinal games with seven appearances at the state title game (1969, 1981, 1987, 1992, 1994, 2000, 2017). The Raiders are 1-5 in state title games with their only title coming in 1994 (2-1A). They have played for the state championship now in five different classes: 1A, 2A, 2-1A, 3A, 4A-II.

The Colgan Panthers punched their ticket to their first title game appearance since 2010 under first year head coach Shawn Seematter. Max Wilson and Bryce Hutchins each had rushing scores in the game for the Panthers to knock off the Olpe Eagles, 15-12, in Pittsburg on Friday night. The Panthers have seven state titles in school history (1974, 1975, 1984, 2000, 2001, 2002, 2003). They are 7-7 all-time in title games and have lost their last four trips to the title game since 2004, when their 66-game state record winning streak was snapped by Smith Center who went on to set a state record of 79 straight from 2004-2009. They get Smith Center at 7 p.m. Saturday in Hays in the 2-1A final.

The St. Paul Indians make their first appearance in the state championship game since they won it back in 2002 with a 43-34 victory over #1 ranked Burlingame.  St. Paul trailed 34-20 late in the third quarter but rallied to score the last 23 points of the ballgame. They also scored the final 27 points of the game against Osborne last week to pull off two of the biggest 8-man upsets we've seen in quite some time. The Indians have three state titles in school history (1986, 2000, 2002). Two of those have came in the 8-man ranks while the 1986 title was in 2-1A. It marks the first title appearance for head coach Keith Wiatrak who was an assistant on the state title teams in 2000, 2002 under Doug Tuck. He also played on a state-runner up team as the quarterback in the 1991 title game. The Indians are 3-3 all-time in state title games and will be making their seventh title game appearance on Saturday in Newton as they take on Hoxie for the 8M-I crown.

Craw-Kan would like to wish best of luck to the three teams as they try to bring home hardware on Saturday.