v Seematter proving to be right fit for Colgan football - Sports in Kansas 
Warning: include(../includes/bodytag.php): failed to open stream: No such file or directory in /home/kansass/public_html/ks/news/index.php on line 36

Seematter proving to be right fit for Colgan football 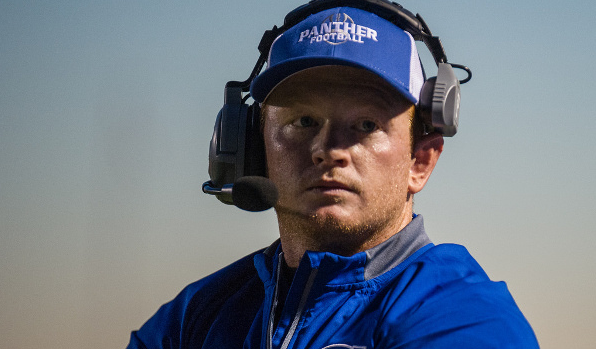 Last December, St. Mary’s Colgan head football coach Chuck Smith announced that he would retire after 37 years as the head coach. Smith had a 343-74 record at the school with five state titles.

The next question became, who could the Panthers hire to replace a Kansas legend? On the boy’s side of things in athletics, it’s not like Colgan is making many new hires over the years. Wayne Cichon has been at Colgan for basketball nearly as long as Smith was for football and Mike Watt has been with baseball since the mid 80’s, two of the best coaches in the state in their sports.

On March 3rd, 2017, Colgan announced that they would hire Shawn Seematter, a young defensive coordinator at Halstead High School, that helped the team go 31-6 over the last three seasons. Seematter, an alum of Kansas State University and Royal Valley High School, became just the third head football coach at Colgan since 1961 and sixth in school history.

“It’s been really good. The transition was smooth over the summer. The kids have bought in from day one. We are very thankful for what Coach Smith did here. It’s been very good so far.” Seematter said as he headed into the 2017 season.

Fast forward a couple months later and Seematter’s transition as the head coach for the Panthers has went about as good as you could ask for. To some, the 2017 Panthers have overachieved. They are 8-2 on the year with two losses to Galena (16-0), now 11-0 in the 3A quarterfinals, and Columbus (23-8), who at the time was #1 in the state in 4A-II, that lost last week in the playoffs to Burlington. The Panthers also beat their rival Frontenac with an impressive 20-0 shut-out victory. The Raiders are still alive in the 4A-II playoffs. The Panthers had a statement victory over Lyndon last week in the 2-1A opening round of playoffs, dominating them 48-6. Lyndon was a pre-season favorite to some to be the 2-1A title representative on the east bracket.

“Having a younger coach around has made us players relate with him and the transition has been easy. He has been preaching to us all season what brotherhood is all about. We have been connecting as a unit since the first day of practice.” Junior two-way starting lineman, Garrett Bolinger said.

Connecting as a unit is right as Seematter has brought a defensive mind approach to SMC football, using team speed in the size mismatches this year, and it has ultimately kept teams out of the end zone. The Panthers returned just three starters on the defense and one of them in senior Bryce Hutchins has been out for much of the year at linebacker and is now playing mainly on offense as the quarterback. Max Wilson was also a returning all-state linebacker and is having a huge year for the Panthers. Jeremiah Buche has also stepped up to be one of the better 2-1A safety’s. Matthew Lomshek has also had a breakout year as a junior in his first year as a starting defensive end. Bolinger, Sam Green and Luke Orender have all been solid on the line this year. The defense that featured hardly any starting experience has thrived this season in only allowing 91 points over 10 weeks, with some of those coming against the junior varsity defense. The varsity defense has only allowed 12 points against 2-1A competition in four weeks this season.

Offensively, Panthers are a run first option team with many weapons out of the backfield including Wilson. Wilson is one of the fastest players in 2-1A and has nice size at 6’0” and 185-pounds. Hutchins started the year at the quarterback, was injured in week one early against Galena and is now back as the starter. Cade Simmons, a first-year starter as a junior this season, has filled in nicely over the season as the quarterback and is now a key part of the backfield for the Panthers. Whatever Simmons is asked to do, he can do. If they do need to go to the air they feature speedster Buche, one of the top two-way players for the Panthers this season. The players have really taken on the new identity for Panther football under Seematter.

“Coach Seematter has brought energy and intensity to this team. It’s amazing how he is embracing our Colgan tradition and making the team his own.” Simmons said.

Colgan and Seematter will look to continue that success in the 2-1A postseason as they travel to John Riggins Field in Centralia this Friday for a quarterfinal matchup with the Centralia High School Panthers (8-2). SMC and Centralia will meet for the 10th time in their school histories this Friday with Colgan holding a 6-to-3 advantage. The Panthers have lost the last two, with the last time in the 2011 semifinal game. The Panthers have seven state titles as a program, five as we mentioned under Smith (1984, 2000, 2001, 2002, 2003), and two under Frank Crespino (1974, 1975) in the modern playoff-era. Colgan is looking to get to their second consecutive semifinal game since falling to eventual 2-1A champion Troy last season.