v Team Effort Leading to Success for Purple Dragons - Sports in Kansas 
Warning: include(../includes/bodytag.php): failed to open stream: No such file or directory in /home/kansass/public_html/ks/news/index.php on line 36

Pittsburg (5A) gets Aquinas this week in the 5A quarterfinals. (Photo: Derek Livingston Photography) 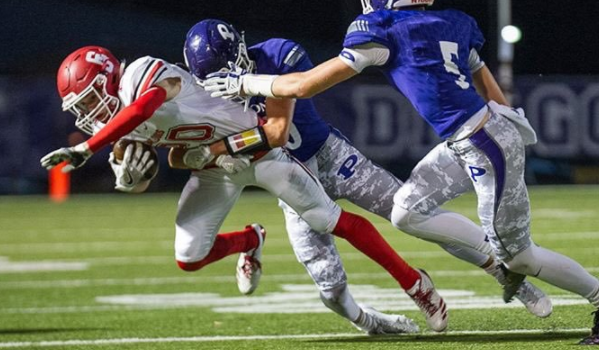 The Pittsburg Purple Dragon football team has seemed to always have one of those star or highlighted players on some of their successful seasons in recent memory.

It was Alex Barnes for multiple seasons until he was done playing after the 2014 season. Barnes is perhaps one of the best, if not best, to ever play at the school as he was a Top 11 selection and the Sports in Kansas 5A Player of the Year three seasons ago. He’s proving his worth now at Kansas State as the starting running back. Then it was last year’s senior class that was highlighted by division one talent in Northwestern signee Trevor Kent, all-state lineman Deveron Duncan, now at Washburn, and four-year starter and all-state defensive back Elijah Harris, now at Pittsburg State. Lineman Kayne Hutchinson, who was injured for most of the season, was also a division one signee in wrestling at Air Force and defensive end Nathan Woods, signed at Pittsburg State. The Dragons had a ton of size and a lot of star-power in past years, but that doesn’t always equal more team success and this year’s Dragon seniors are proving that

Entering the 2017 season the Dragons returned only two defensive starters, only one of them being full-time in junior strong safety Joel Kafka. On paper, it looked like the only key returnees would be multi-sport athlete Chase Curtis at the quarterback, Jhalani Long at running back, a few lineman, Kafka on defense and that was about it. The expectations from people outside the program were not high of the Dragons in 2017.

Fast forward two months later and the Dragons are a team to beat in 5A with a total team effort this season. No stars, no complaining on who gets the credit, and a very tight knit group of seniors.The Dragons are 8-2 with a 7-0 record against Kansas competition. PHS has also played a very solid schedule, something they did when they left the Southeast Kansas League and went independent after the 2015 season. In year one of the schedule in 2016, the Dragons went 0-3 against the Missouri competition that they had scheduled (Harrisonville, Webb City and Carl Junction). Likely the top three teams in Missouri Class 4 in 2016. For the most part, the Dragons were dominated in those match-ups and we didn't think they stood much of a shot against any of them entering 2017 with the same schedule. This year the  Dragons seemed more prepared for what they saw. They knocked off Harrisonville, MO (37-21) earlier this season in week one, last year’s Class 4 Champ in Missouri and a team that is still alive in the Missouri playoffs. It’s perhaps the best Dragon win since they knocked off Aquinas in the 2014 district to get into the playoffs. Their only two losses this year have came to the top two ranked teams in Missouri Class 4, Webb City and Carl Junction. Webb City, a Missouri power for over 25 years, knocked off Carl Junction in the Class 4 playoffs last week and will face Harrisvonville this week in the Missouri playoffs.

“All these kids are smaller than the ones we had last year, but what these guys do is whatever you ask them. They do exactly what you ask them to do. Individually, we are nowhere near as talented as we were last year. But as a team with responsibilities, intelligence, and unselfishness I think we are a much more improved team from where we were last year.” Pittsbug High head coach Tom Nickelson said.

Pittsburg offense has went through Curtis, a 6-foot-5, senior, who has thrown for over 1,000 yards with 14 touchdowns. He also missed a game and a half due to injury and has been limited in action due to blowouts. Pittsburg High is also a run-first team otherwise you may see some bigger numbers from their live-arm senior quarterback. Curtis, who could likely develop into a quarterback or baseball prospect in college, is one of the better multi-sport athletes in 5A this school year as he is also a standout in baseball and basketball. Pittsburg has three different backs that have at least 400 yards rushing or more led by Brandis Evans who has 840 yards and six touchdowns. Corbin Jefferson has 585 yards while Jhalani Long has 443. Dylan White has had a breakout year as a junior receiver in which he has 555 yards receiving. Zach Sutton has also stepped up big as a tight end with over 200 yards receiving and four touchdowns.

“It’s been special. We don’t have the one guy besides Chase it goes through. We have multiple backs, multiple guys that can catch it. We have a lot of very good athletes. The thing that’s special is that all these kids just want to play well and when they don’t have the ball they’re cheering on who does. It’s a real special group. There are 12-to-13 guys that can do things with the ball in their hands. It’s not to say other groups have been selfish before, but this is just a real special group. They want to win and they don’t care who gets the credit.” Nickelson said.

Pittsburg, who gets Aquinas (9-1) this week in the 5A quarterfinals on the road, will really have to rely on their defensive unit to have a huge game on Friday to stop the flex-bone rushing attack of the Saints. It’s a unit that has been very impressive in 2017, especially with the lack of starting experience. It is led by junior linebacker Jerek Butcher (95 tackles, 2 INT) and senior outside linebacker Chase Johnson (86 tackles, 3 INT). Joel Kafka is also one of the better strong safety’s in 5A this season and has racked up 58 tackles over his junior year. Dylan Jordan has 53 stops, while Tye Cicero has 59 and Peyton Steele has 37. Nathan Neef is also one of the better kickers in the Southeast Kansas area and has 32 stops as a defensive lineman.

Pittsburg (8-2) gets Aquinas at 7 p.m. in an away game this Friday in Overland Park. Aquinas only loss this season is to 4A-I three-time defending state champion Bishop Miege (10-0), who may be the best team in all classifications of Kansas. Pittsburg has not made it to the semifinals since 2001, when quarterback Dylan Meier led the Purple Dragons to a 5A state runner-up finish, losing to Salina Central in the title game. A win on Friday would change that and put the Dragons in the semis. Pittsburg has been in the semifinal game 12 times in school history, 10 times under Larry Garman and twice under Merle Clark. The Dragons have three state titles as a school in the KSHSAA modern playoff era (1969-present), all under Garman (1983, 1988, 1990). They also have four state runner-up finishes in school history two under Garman (1970, 1987) and two under Clark (2000, 2001).

This feature is presented by Labette Bank of Pittsburg, proudly supporting the Purple Dragons. Labette Bank is a proud supporter of Southeast Kansas Athletics. To nominate the Labette Bank Athlete of the Month, contact Chet Kuplen at sportsinkansas@gmail.com