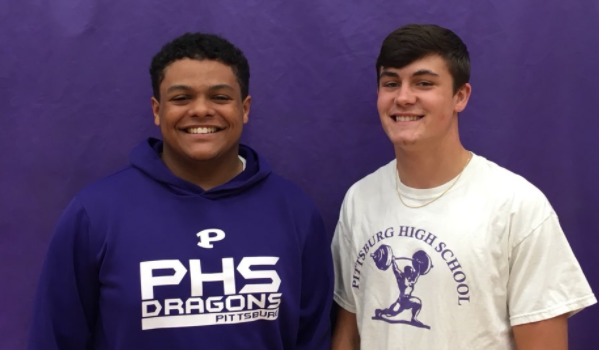 The Labette Bank Athlete(s) of the Month from the Southeast Kansas area for their perfromances over the last month are are a pair of linebackers from Pittsburg High in junior Jerek Butcher and senior Chase Johnson.

The two are playing like two of the better defenders in the area this season and have helped the Dragons to a 8-2 mark in 2017. The Dragons only two losses have came to the top two ranked teams in Class 4 Missouri (Webb City & Carl Junction). Butcher, a middle linebacker, has a team leading 95 tackles over his junior season, which four have been TFLs and two interceptions. Johnson, a team captain at outside linebacker, has tallied 86 stops, a team-leading three interception, one of which went for a score. The defense, which also features strong safety Joel Kafka (58 tackles, 2 interceptions), Dylan Jordan (53 tackles), and Tye Cicero (49 tackles) has only allowed 22 points over the last three weeks of the season. Both backers have been among the 5A leaders in tackles all season long. Offensively the Dragons are led by Chase Curtis who has passed for 1,026 yards with 14 touchdowns, while reciever Dylan White has 555 yards. Brandis Evans leads the rushing attack with 840 yards.

Pittsburg (8-2) is on a four-game winning streak and will travel to the Kansas City area this weekend as they will take on the Saints of St. Thomas Aquinas (9-1) in the third round of the 5A playoffs. STA is one of the best teams in all classes of Kansas. The Pittsburg defense will need its best game of the season to limit the flex-bone offensive attack of the Saints. Congrats to Jerek and Chase on being named Labette Bank Athlete(s) of the Month.