v Faces in KS: Mitchell Henry - Sports in Kansas 
Warning: include(../includes/bodytag.php): failed to open stream: No such file or directory in /home/kansass/public_html/ks/news/index.php on line 36

Mitchell Henry of Nemaha Central is one of the top multi-sport athletes in 3A. (Deb's Images) 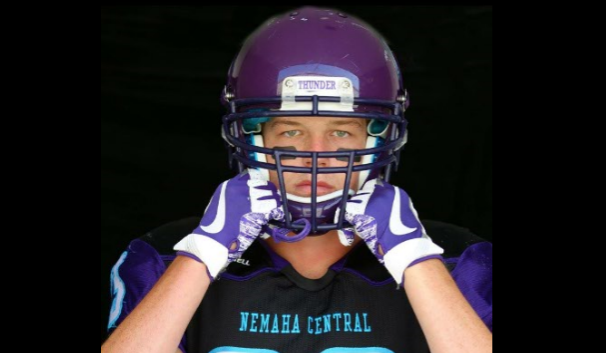 When it comes to looking at top multiple sport athletes in 3A, one that comes to mind is Nemaha Central senior Mitchell Henry.

Henry, a 6-foot, 175-pound, senior quarterback on the football team, can do a little bit of everything for the Thunder. He entered Tuesday’s game with 823 rushing this year and 875 passing with 21 rushing touchdowns. He also has 157 yards as a receiver. Last season he played primarily running back for the Thunder and had 600 yards rushing with 426 yards receiving. He is well on his way to being a 1,000 and 1,000 quarterback this season in his first year at the position. Defensively, Henry is one of the best defensive backs in the state over the last two seasons in 3A. Henry is also an elusive return man.

“Mitchell Henry is one of the best players in the state. He is going to make things happen. We had him at running back last year. We like to have the ball in his hands at all times. He get’s it done with his legs first but he can throw it to keep teams honest.” Nemaha Central head coach Warren Seitz said.

Henry has made the nice transition from running back a year ago, something that he feels like has helped him with the quarterback position this year. It also helps with five solid senior offensive lineman, led by all-state candidate Eli McWilliams, paving the way.

“I can do a little bit of anything on offense. I moved from being running back to playing quarterback this year which makes me better at reading blocks and reading players on option routes.” Henry said.

Henry isn’t just a football player either. Last season, as a combo-guard, he earned 3A all-state honors from Sports in Kansas after posting 14.1 points per game and four rebounds per contest.  So which will it be that Henry may go on to do at the next level?

“I like both sports about the same, but right now all my focus is on this football season only.” Henry said.

The focus has been there as the Thunder are 10-0 on the season, won the Big 7 conference undefeated, won the 3A district title, and 3A bi-district title. It sets up a match-up with state power Silver Lake (10-0) this Saturday in Seneca. Last year the Thunder beat Silver Lake, 21-14, in the playoffs.

“3A is so deep especially when the #1 team in us and #4 team ranked in Silver Lake meet up in the second round of the playoffs. I feel like we have yet to play our best football so far.” Henry said.

The Thunder and Henry, led by head coach Warren Seitz, a former Mizzou QB and NFL player from Topeka, will need their best football this week to move on as they will look to get to the sectionals of the 3A playoffs where they will get either Galena (10-0) or Wellsville (9-1). NC is also looking for their first ever state title game appearance this fall since the consolidation of Nemaha Valley and Baileyville B&B in the fall of 2014. Since the consolidation NC is 34-2 in the regular season with 29 straight regular season victories. Last year the Thunder fell in the 3A semis to Rossville who won three straight 3A titles from 2014-to-2016. Seneca-Nemaha Valley had one state runner up in program history (1973), while Baileyville B&B had five state titles (1982, 2008, 2010, 2012, 2013) before closing in the spring of 2014. B&B won a title in their last year (2013) of existence before consolidating.

“The community has been very supportive of this consolidation. The kids all knew each-other and the communities are very similar. The communities expect success and they will back the program. The expectations from both schools were high and when you got together it was going to be that. It really started with the families, communities and it has grown from there.” Seitz said.

Saturday’s kickoff versus Silver Lake is slated for 4:00 p.m. in Seneca. We caught up with the outstanding senior athlete below in the latest edition of Faces in KS.

I would say my brothers got me involved. Even though they are both older than me I would always play up to their age group when I was younger.

We have many goals as a team: like going undefeated for the third straight regular season, winning the Big 7 title outright, and above all of them winning a state title.

Yes, we returned a lot on both sides and the scary thing yet is we haven’t played our best football.

I can do about anything. I was a running back last year and moved to quarterback which makes me better at reading blocks and reading players on option routes.

I was a little banged up through district play but the time I was in there it was awesome and scary how good our team can actually be.

Our offensive line. Even though there not play makers they make the plays happen. Having five seniors start up front is pretty awesome especially as a QB. Other than that Mitchell Heiman is a stud at linebacker, if he gets his read you know he is going be there to make the tackle.

I wouldn’t want to play anywhere else. Now that we have established the winning way in Nemaha it is one of the coolest things to see how much support we have from our community.

Spread out. We can do it all. Like to get guys out in open space and make one on one plays.

People should come watch us because our offense is more advanced than most at the high school level.

I don’t know. I love to play both sports about the same. Right now I’m focused on football

I love being with my team. I know this is only a once and a life time deal so I spend as much time as I can with my team. We pretty much are family in the end

Both my Coaches Warren Seitz and Jon Thomas are pretty chill. They know I know what’s going on and we converse what we think is the better blocking scheme or play. So they just let me play and they know I have the ability to make something happen every time I touch the ball

We started off a little slow but going into districts we started playing well and up to are standards.

3A is brutal talk about that?

3A is by far the toughest division. 64 teams in the playoff and most of them with a winning record. This year there seems to be more teams than usual that are very good. 3A is deep especially when the #1 team us and # 4 team Silver lake meet in the second round of the playoffs.

We lift 4 days a week throughout the summer and we did a lot of 7 on 7 on our own time. We participate down at Washburn in 7 on 7. Also, this summer we went down to Manhattan and scrimmaged some bigger schools and we could see how good we were going up against 6A schools.

Haven’t decided yet, it is kind of open to about anything at the moment.

I play baseball in the spring and golf whenever I have free time.

I love to be outdoors, So hunt, fish and trap. I also like to spend times with my friends

I hope to be an Athletic trainer or a coach.

Weights would be my favorite but I am also good at math. I like to procrastinate till the last minute though.

I look up to my dad. Everyone talks about how good he was in high school and college and I want that to be said about me when I am older.

I would have to say the Willows. It has some awesome food.

I am an animal person. I love animals. I raise a bunch of weird animals like chickens, geese, and a goat.