v Faces in KS: Zarek Fewell - Sports in Kansas 
Warning: include(../includes/bodytag.php): failed to open stream: No such file or directory in /home/kansass/public_html/ks/news/index.php on line 36 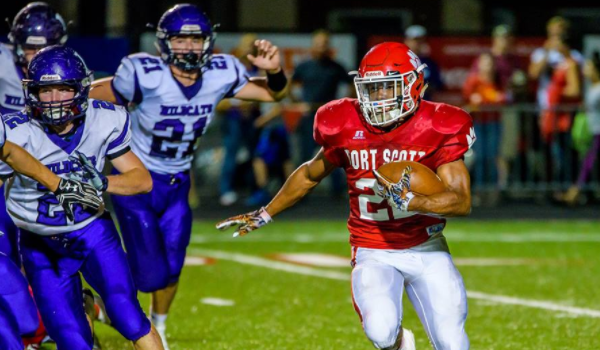 Fort Scott senior Zarek Fewell is opening eyes across the state this season. The reason why is his play at the running back position for the Fort Scott Tigers after the first nine weeks of the 2017 season.

“He is a relentless runner. He has great vision, but he’s got a great build for a running back and is extremely strong. Zarek also has a great center of gravity and balance. I can’t tell you how many times he’s turned a good run into a great run. He refuses to be tackled. He turns a first down into a touchdown.” Fort Scott head coach Bob Campbell said.

His 1,587 yards are most all-time in a single season at Fort Scott High School, surpassing Travis Stepps record in 1996. Stepps, an all-state running back on the 1996 4A title team, went on to become an All-American defensive back at Pittsburg State. His 28 touchdowns are also most all-time in Fort Scott for a single season, passing Josh Lattimer who had 25 in 2000. Lattimer, the all-classes defensive player of the year in Kansas in 2000, went on to become an All-American at Pittsburg State as well. The 28 touchdowns are tied for fourth all-time in the SEK League. The SEK record is 38 touchdowns set by current K-State running back Alex Barnes at Pittsburg in 2014.

A lot of the reason for the breakout season for Fewell is his work ethic this off-season. Fewell looks like he lives in a weight room. He told us he worked on his lower body to become more explosive for his senior season, it seems to be working. He has a squat max of 475 pounds and cleans 335, we would call that pretty explosive. Fewell also has 40-yard dash speed (handheld) in the 4.50-4.60 range.

Fewell is not just a football player either. He has also been one of the better wrestlers in 4A in the state of Kansas in the past, earning all-state as a freshman and sophomore. He doesn't plan on wrestling this season as he needs to maintain adding weight for football at the next level. So how has wrestling help him become a better football player?

“Wrestling has taught me how to control my balance and control against an external resistance. Wrestling is the toughest sport on this earth hands down. It has helped me stay low and maintain good foot work. It defines who you are.” Fewell said.

For now, it’s all football for Fewell and the Tigers (7-2) who will look to make a run in 4A-I this season after a disappointing 3-6 mark in 2016. The Tigers won their district with a 3-0 record with impressive wins over Louisburg, Paola and Ottawa. In those three games Fewell went for 211, 192 and 171 yards. He had 574 yards in district play alone this year. Seven of his games this season he has had 150 or more yards, including 150 plus in each of the two losses.

It’s not just Fewell either as he will be the first to credit his offensive line. Jesse Lawrence has also stepped up big with blocks out of the backfield and has over 500 yards rushing and 10 touchdowns. Tight end Matt Campbell leads the squad in receiving with 355 yards with four touchdowns, while receiver Gunnar Brown has 331 yards and a score. Quarterback Jesse Jones has passed for over 800 yards with eight touchdowns. Defensively the Tigers are led by all-state defensive lineman Andrew Callahan, who is a cousin to Fewell, and is one of the best lineman in Kansas at any classification. Senior linebacker Derek Bollinger also has over 100 tackles in nine weeks. Nick Lawrence has also stepped up big with six interceptions.

“Everyone has stepped up big this year in key moments. Everyone on our team are key players. We had to change the tempo some when we lost to Pittsburg and Labette. After what we did in district I think we can go on a run.” Fewell said.

Fewell and Fort Scott will be back in action in a rematch against Chanute this Friday in the first round of the 4A-I playoffs. Fort Scott beat Chanute 34-13 earlier this season behind 300 plus rushing yards from Fewell in SEK League play. Fort Scott has two state titles as a program, winning 4A under Campbell in 1996 and 2000. The Tigers are 33-22 all-time in the Kansas playoffs. We caught up with the outstanding senior running back below in the latest edition of Faces in Kansas.

This feature is presented by Crooners, Steaks/Seafood/Pasta/Chicken, in Fort Scott and Liberty Theatre in Fort Scott, proud to support the Fort Scott Tigers.

I began playing flag football, and then moved onto a tackling league.

What are your individual goals this season?

My three goals this year were to rush over 1,500 yards in a single season. Have 20 or more Touchdowns at the end of the season. Lastly, was breaking the most yards in one game record, which I did on September 15th, against Chanute.

I run with low center of gravity with good balance that makes it hard for other players to bring me down. What makes me a bigger threat is my offensive line. They're the ones that give me the opportunity to get to the second level.

With our performance against Louisburg and Paola we have proven that we can compete for a shot.

I want to be a dynamic player that’s tough to bring down. I want to be able to run between tackles and in open space, and have the ability to catch the ball out of the backfield.

What’s it like to play for Coach Campbell and the staff?

It's great playing for Coach Campbell and the staff because the amount of time and effort they put into preparing our team is greatly appreciated by the team and myself. Not only being taught on the field, but learning life lessons as well.

How has the schedule been?

Our schedule gives us a variety throughout the season. Pittsburg, Labette, and Chanute defiantly prepared us for district play.

What is it like to play at Fort Scott?

Playing at Fort Scott is wonderful. Especially playing in front of the home crowd. I also enjoy playing alongside my teammates cutting it lose.

It looks like the weight room is important to you, what do u focus on?

I focus on my lower body a lot. With my stature I don’t look big, but have that power and explosiveness helps make up for it.

You are a very hard runner to bring down, does wrestling factor into that?

Yes, wrestling has impacted me tremendously. Not just as an athlete, but as a person too. Wrestling taught me how to control my balance and control against an external resistance. Another key factor it taught me was how to stay low with good foot work. Wrestling is the toughest sport on this earth hands down. It defines who you are.

We run read option. Most teams know us for running the ball down the field.

Our team loves to play in front of the home crowd. The team plays hard on every snap. We take pride in doing the right things and playing with sportsmanship.

Andrew Callahan, guy might be the best defensive lineman in the state?

Andrew is my cousin, and he's the best. Plays hard every snap on both sides of the ball. He's a key factor on the team and sets the tone for our defense.

Colby Paige, Elijah Wright, Mason Couch, Ben Daniels, Andrew Callahan, Jessie Lawrence, and Derek Bollinger. Everyone has stepped up in big moments. The whole team in my opinion are all key players.

My favorite thing about football is winning. I also like being able to run behind my offensive line and scoring off their blocks.

I am pleased with our start and where we are at this point. Our loss to Pittsburg and Labette changed the tempo. We as a whole practiced harder and got our momentum back. Our wins over Louisburg and Paola showed the team we can be... the team we are.

During the summer we attend a conditioning program. Then I work out two through three hours in the gym later in the day.

I would love to play at the next level. I have seen some interest. Patience is key, and good things will follow.

What’s it like to break Travis Stepps record after nine games?

It's a great accomplishment to have, but I'm more focused on staying healthy; and studying myself to see what I can do better as a Running Back.

Goals in wrestling this year and how have you done in the past?

I'm a 3x state qualifier. 2015 I placed 6th in state. 2016 I placed 4th in state. 2015 Regional Champion. I was also ranked all year last season in the state of Kansas. Coach Brown and Coach Metcalf are great coaches to have. The respect I have for both of them is through the roof. I wouldn't have accomplished those great things if it weren't for them. I'm grateful for what wrestling taught me, but I'm keeping my focus on football and weight gain. I'm stepping out this year, so I can pursue my dream that I've had since I was eight years old.

I played baseball freshman and sophomore year. Junior year I decided to drop the sport, so I could focus on getting bigger in the off-season and working.

I am usually in the gym. It's a fun hobby of mine. I love pushing myself to the limit.

In 10 years I hope I'm in the league playing football, but not for the money. Just for the love of the game. If it doesn't work out I'll pursue the profession of being an Architectural Engineer.

My favorite subject in school is English. I'm part of NHS and also on the Honor Roll. I'd consider myself a student athlete.

Darren Sproles is my role model. He was always told that he wouldn't be able to play at the next level. Instead of letting the negative comments destroy his dream; he used that as a motivation. Now he's one of the best backs that played at Kansas State and still dominates in the league.

I love to eat at Crooners.