v Faces in KS: DeShawn Hanika - Sports in Kansas 
Warning: include(../includes/bodytag.php): failed to open stream: No such file or directory in /home/kansass/public_html/ks/news/index.php on line 36 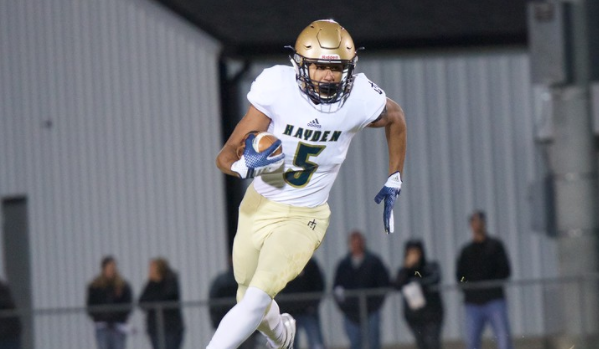 When it comes to multiple sport athletes in the state of Kansas for 2018, one of the better ones that comes to mind is Topeka-Hayden senior DeShawn Hanika.

Hanika, a 6-foot-5, 200-pound, senior, football and basketball player, is having a breakout season for the Hayden football team this fall. Hanika poses match-up problems for defensive backs with his size and it's proven in the stat column. The senior reciever, who can also play tight end, has 937 recieving yards this season on 50 catches. 16 of those 50 catches have went for touchdown receptions. Hanika has risen to be one of the top recievers in all classifications of Kansas for the 2017 football season. It's not just a one year thing either, as a junior he had 34 catches for 441 yards and six touchdowns.

In the past Hanika may be more known on the basketball court, as he averaged 12.5 points per game and 6.6 boards per game for the WIldcats, who finished 3rd in 4A-II in 2017. So which will it be for Hanika at the next level, who could play either sport?

"My parents laugh at me because in football I love football and want to play forever, but then during basketball season I love playing basketball. I prefer whatever sport is in season. I plan to play football at the next level though." Hanika said.

Whatever sport he chooses, Hanika will be a big and athletic body that will contribute. We feel like he is one of the most underratted football prospects in the state for 2018. He is in the hard spot of a mix of a tight end and receiver. However we see that as a value as he can play both with development. He has the frame to put on weight and be a tight end at the next level, but could also continue to play wide reciever but will need a little more speed. He will need to get stronger to play tight end but does feature 4.7 speed and has a 31-inch vertical, with his 6-foot-5 frame, a big way to create separation. Hanika blocks well, loves contact and has great hands, a difference maker for him in developing into the player that he has been this season.

In basketball, Hayden should be the favorite to be the 4A-II champion this March. In addition to Hanika, they also return Zach Harvey, a division one recruit ranked #38th overall in the class of 2019 by Rivals with multiple offers, and all-state caliber guard Jett Canfield. Hayden could be one of the best basketball teams in Kansas, regardless of classification this year.

But right now all of Hanika's focus is on football. Hayden, who plays in 4A-II for football as well, is a run first offense but has utilized Hanika big in the passing game in their 5-4 mark in 2017. Hayden also plays in a 5A/6A league but is undefeated against 4A-II opponents. Sampson Huston has also stepped up big at the quarterback position over the last two seasons, while Brent Peavler is one of the best linebackers in 4A-II this season.

"Sampson has done great, considering this is only his second year playing the position. Brent is a work-horse, he is one of the best linebackers I have seen and he's also been a power running back. Without our lineman though, none of us would be able to be playmakers." Hanika said.

Hanika and Hayden, led by head coach Bill Arnold, will be back in action this Friday as they open the 2017 playoffs against Prairie View (4-5). Hayden is a heavy contender to perhaps be the favorite to reach the 4A-II title game on the east, as they did one year ago. Hayden is 54-23 all-time in the state playoffs and took state runner-up last year in 4A-II. Hayden has three state football titles (1998, 2004, 2008). We caught up with the outstanding senior athlete below in the latest edition of Faces in Kansas.

I started playing tackle football in 1st grade.  I played little league football for the Topeka Blue Thunder and my dad was one of the coaches.  I had a blast while learning the fundamentals of football at a young age.

To take one game at a time.  We just won Districts and now focusing on winning Regionals next.  Of course our long term goal is we want to end up winning a state championship but right now our most important goal is to win the next game.

I have believed that every year I've been at Hayden.  From day one Coach Arnold instills a work ethic and frame of mind to not except anything less than that; and this year is no different.  I don't think we have played our best football yet.

I am a very competitive person and my size, strength and speed helps to create a lot of mismatches in the receiver position.  I love going out to catch the ball just as much as I do blocking a corner to the track for teammates.

We won our District which was a goal for our team this year, but we still haven't played to our potential.

Brent Peavler is a work horse, he is one of the best linebackers I have ever seen and has been a power running back for us this year especially.   Sampson Huston, stepped up at quarterback last year and has taken off.  Sampson has done a great job considering this is only his second year playing the quarterback position.  Without our lineman though, none of us would be able to be playmakers. Anyone on our team can have a big night, which is nice because you never feel pressured.

What is it like to play for Topeka Hayden?

It truly is like playing for a big family.  The tradition and the sense of community is amazing at Hayden.

We are a run first offense which is no surprise, it's old school smash mouth power football.  But coach isn't afraid to air it out when he sees the opportunity.

First of all the Hayden community at the football and basketball games is second to none.  Secondly, we are a fun team to watch and play old school football.  Nothing flashy, just good football.

The brotherhood, it's like no other sport.  Being able to compete with my brothers there's no greater feeling. If all 11 of us don't do our job, then we fail. By the end of the season I have spent more time with my football family then with my own family, between practices, film and weights.  But there is no place I would rather be.

Football- There are several incredible coaches for football at Hayden. I remember my first Hayden football practice with Coach Arnold. It was the hardest practice in any sport I had ever had. Coach Arnold demands discipline, leadership and a strong work ethic in his practices more than any other coach I've had in high school. There's no other coach I'd rather play for, he pushes me to be the best I can everyday and expects more out of me every game. I spend a lot of time with Coach Troy Slusher too. He's taught me basically everything I know about the receiver position. He pushes me everyday and accepts nothing but my best.

Basketball- Coach Torey Head is taking over as head coach for basketball this year. I haven't played for Coach Head before, but I know him personally and I'm excited for the opportunity to do so. Coach Head has a lot of experience and with the team we have, this year should be fun.

Some would think it was slow. We play in the Centennial League, which has been strong the past several years. There are a lot of talented players and great coaches in our league. Being a 4A school we don’t have the numbers the other schools do, so a lot of our guys play both ways. This pays off at the end of the year when it really matters.

What’s it like playing in state football title game?

I wasn’t able to sleep the night before our state game last year. The nerves and the excitement get you going.

What will it take for you guys to get a basketball title this season?

Just play ball and have fun. As a team, most of our guys have been playing since second or third grade. We have several guys back with varsity experience and look forward to playing for Hayden.

We worked out in the weight room everyday at 6 am. We had good participation as a team which is important.  We went to a few team camps and held our own 7 on 7 games on our own time.

When I can find time, I like to golf, fish and hunt.

That’s a tough question. Every kid that plays any sports wants to play pro ball. I have dreams of playing in the NFL. In 10 years though, I want to have a college degree and be a successful person.

Science is my favorite subject. I'm light hearted and like to joke around.

My role model is my 16 year old cousin and classmate, Mia. She was the strongest, most inspirational person I've ever known. Mia passed away of cancer January 25, 2017 after a long tough battle. Mia is Hayden's "12th man" this season.

The best place to go get something to eat would be the Prize Package. Probably not the healthiest, but definitely the cheesiest cheeseburgers and best cheeseballs anywhere around here.

I go visit my cousin Mia's grave every Friday before our games.