v Faces in KS: Brooks Nichols - Sports in Kansas 
Warning: include(../includes/bodytag.php): failed to open stream: No such file or directory in /home/kansass/public_html/ks/news/index.php on line 36 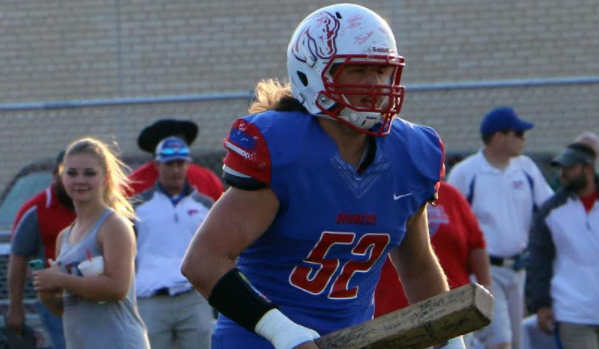 Russell senior linebacker Brooks Nichols is having a breakout year for the Broncos in 2017. He is proving to be one of the better linebackers in Class 3A this season.

The 6-foot-2, 230-pounder, also has some size to him. He is a big bodied, physical backer, with a great motor, that loves to hit. Nichols is also a black-belt in Taekwondo to give you an idea of his toughness. He has tallied up 84 tackles this season in seven games along with a forced fumble. He’s not just a one-year wonder either, last year he had 82 tackles with three sacks, a fumble recovery and two forced fumbles. As a sophomore he had 86 tackles and added 31 more as a freshman. Nichols now has an impressive 283 career tackles as he enters week eight of the season.

Russell hasn’t had a ton of football success over the years, making the playoffs just four times. They last made the playoffs in 2006. Russell is just 3-4 all-time in the state playoffs and hasn’t had a playoff win since 1979. Russell has just 15 regular season victories since 2011, four of those coming this year.

Russell has also surprised a lot of people this season, being that they haven’t had recent success. Many thought they would be lucky to win a game or two this season. They were wrong. Fourth year head coach Jeff Brull and the Broncos seem to be one of the most improved teams in 3A this season with their 4-3 start. Russell also has an impressive 4-2 mark in their league (NCAA). Their three losses are to opponents who combine to be 16-5 on the year.

“There was a lot of talk preseason that we would be lucky to win a game with how many people we lost from last year. Our senior class was often overlooked. Then, we went on a three-game winning streak. Nobody but us in the locker room believed that we could win some games. We put in a lot of hard-work four days a week this off-season to get ready for this upcoming season.” Nichols said.

For those that haven’t been to or played in a small-town football game in Kansas then they are missing out. It’s much more than a football game, it’s a community event. It’s a since of pride for the town. In Russell,  a town of just over 4,500 peopole located at the intersection of I-70 and U.S. Route 281 in north central Kansas, it's just Russell High. It’s not a town with four different high schools with four different directions attached to their school names. The Broncos are this town.

“You play other small-town teams so you know most of the opponents you play. People come to the games in our community even if they don’t have someone they know playing. They want to see us play well and support our team. They have that hometown pride. It’s special.” Nichols said.

Nichols would also like to play collegiately at the next level and is hoping someone will take a chance on the small-town linebacker out of the town that is most famously known as the home of Bob Dole.

“I would like to play at the next level. I have received some interest but no offers yet.” Nichols said.

“We are going to have to prepare ourselves a little better than we have in order to have a shot to get in the playoffs. We have done a great job playing as a team this year and we need to continue that. Just have to work on some things.” Nichols said.

We caught up with the senior linebacker below in the latest edition of Faces in Kansas.

I got involved in football in 2nd grade when I started playing flag football. Then, when I began playing Salvation Army football.

My goals this season are to have over 100 tackles, and be someone other teams have to know where I am in their prep for the week. Another goal of mine is to make the team as successful as possible.

What will it take to win your next couple games?

For us to win our next two games we will need to prepare ourselves in practice better than we have so far. I think we’ve done a great job this season of playing as a team, and being ready for our games, but at the same time we have left some things to be desired in our prep.

What makes you such a force as a linebacker?

I think my physicality makes me a force at linebacker. I’m not afraid to put a hit on someone, and I have a motor that keeps running the entire game. There aren’t many people who can take being hit over and over again.

I expect a lot of my teammates and as a result I think I am sometimes misunderstood in terms of where I’m coming from. However, I see myself as someone who others look to on the field to see how to handle things.

Playing in small town Kansas is always a different scenario from week to week. We play other small town teams, and we always know someone from the team we’re playing which makes it a different mindset for how I approach the game. Another thing that makes small town Kansas football different is the game atmosphere from the crowd. People from the community come out to watch the game even when they don’t have someone playing, just because they want to see us be successful and they have pride in their town.

Your stadium is pretty awesome for a 3A, what’s it like on game nights?

Our stadium is something that really stands out for a 3A school. On game nights we always have relatively the same conditions on the field which make playing a lot easier for both teams. Also we have a great setup for out grandstands and we’re capable of hosting a lot of people which makes the atmosphere on the field really energetic.

To those that haven’t seen it, describe your style of play?

My playing style is very downhill. I would describe myself as a great tackler in the box, and someone who can flow to make tackles away from me. I’m a big body and I can meet people in the hole and not give up ground.

Other key players on my team would definitely be all the seniors. We’ve put in a lot of time, and as a class have been overlooked by almost everyone. My other linebacker Isaac Guzman is a kid who hasn’t gotten a lot hype, but when it comes down to it there isn’t anyone else I’d rather have next to me on Defense.

My favorite thing about football is the physicality of the game. Unfortunately it’s something that is being taken out more and more every year because people want less injuries. However, it’s a part of the game and it always has been. It’s by far my favorite part of football.

How would you describe your guys season so far?

In the offseason we work four days a week lifting and getting ourselves stronger so that our bodies are ready for the season. We also have practices twice a week for the first part of the summer to help the freshman and the new kids to the program get acquainted with our system. It also helps the returning players to get our assignments down and it gives us a head start on the season so we can really get into the grind in August.

I would like to play at the next level. I have seen some interests from schools, but I have not received any offers at this point.

My favorite thing to do when I am not playing sports is probably upland pheasant hunting with my family.

In ten years I see myself finishing college and hopefully starting my career as a doctor.

My role model would have to be my grandfathers. They are arguably the two hardest working and honest men I have ever met. One lives outside of Russell and has lived in northwest Kansas his entire life. He grew up in Smith Center, and after college moved to Russell where he has lived ever since. The other lives in Onaga, Kansas and has lived there his whole life. Both of these men have shown me and continue to show me the importance of hardwork and honesty. My grandpa that lives in Russell still farms, and my grandpa in Onaga continues to operate his barbershop at the age of 82.

In my opinion the best place to eat in Russell is Peking Garden on highway 281. Their food is amazing and the staff is super friendly.

The average person wouldn’t know that I got my black belt in the American Taekwondo Association at the age of 6.