v Phillipsburg football has built a championship culture - Sports in Kansas 
Warning: include(../includes/bodytag.php): failed to open stream: No such file or directory in /home/kansass/public_html/ks/news/index.php on line 36 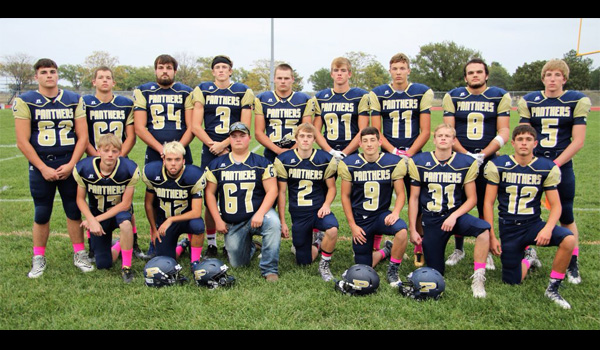 Phillipsburg football, led by head coach J.B. Covington, has had a lot of recent postseason success but it wasn’t always that way. The 2002 football season marked the first time the Panthers had ever made the state playoffs, just 15 short years ago. The Panthers have just 14 total playoff wins all-time, all of those coming since 2002. The majority of those coming in the last few years. It’s amazing how a lot of recent success can make you forget about the zero playoff appearances prior. Prior to 2002, KSHSAA only allowed one playoff team out per district, making it much tougher to even reach the playoffs.

A big reason for the recent success has been the group of 16 Panther seniors who have led Phillipsburg to a 39-5 record since they entered as freshman. That also includes a 2-1A state championship two years ago in 2015. Less than two years ago we were writing an article about Phillipsburg making their first ever semifinal and state appearance. Eight seniors start on offense and eight seniors start on defense. Some teams drop off a year or two after a title run, the exact opposite for Phillipsburg, who is ranked near the top 1-to-3 in of all of the statewide 3A media polls this season at a perfect 7-0. 3A is also the largest classification with 64 total schools. The Panthers have only had one loss dating back to the beginning of the 2016 season, a playoff loss last season to Hesston in the 3A quarterfinals.

Another key component of where 3A Phillipsburg is currently at is elevating their play over the last several seasons. The Panthers play in arguably the best 3A/2-1A league in the state, the Mid-Continent League. In addition to Phillipsburg, it features Ellis, Norton, Oakley, Plainville, Smith Center and Thomas More Prep. Stockton, who plays 8-man now, was once a 2-1A power in the 1980’s and 1990’s. Do you remember the Brooks Barta, Jeff Simoneau, Mark Simoneau, Braden Wilson and the Roger Barta streak days at Smith Center? You get the point, it’s a ridiculously good league with great teams and players over the years.

“The biggest key to our success has been the good players that go through this league, we’ve seen dynasties, streaks, NFL players, D1 players over the years and it was tough for years to make it out of districts. It was a development process for us to get to this point. Our kids have really bought into the weight room and they work their tails off. We have finally established the culture we have wanted to establish. It’s not just the varsity either, our middle school and junior varsity ranks have also developed that culture. We have a lot of competitive kids that have came through our program recently.” Covington said.

A winning culture usually means more numbers out and numbers have also been key for Phillipsburg. They usually have around 40-to-45 kids out average per year and this year 58 kids are out for the team, which is a big part of success in developing depth at the small 3A high school, who was playing in 2-1A just two years ago. To give you an idea of how good 58 kids out is, we have seen 4A-I teams in Kansas over the last few seasons that are in the 20’s and 30’s in numbers.

Phillipsburg is winning the hallways with their on-field performance on Friday nights. Yeah, the 39-5 is impressive for the seniors, but they were also undefeated in MCL play for the first time since 1962 last year. They are looking to make it back-to-back this year. Panthers have also won seven in a row over state power Smith Center. That sounds made up, right? They are also 3-3 against their league rival Norton over the last six meetings, including beating them in last year’s playoffs. This year’s team has outscored opponents 377-to-66 on the year. The most impressive victory, a 43-0 blow-out, over 2-1A #1 Smith Center. The majority of the 66 points were given up by back-ups.

All this has a lot to do with the close-knit group of upperclassmen and their leadership on and off the field.

“This group of seniors has been close ever since middle school football. Our team motto is to play for each other. Our plan for this to work is to work on ourselves and continue to take this year one game at a time.” Senior two-time all-state linebacker John Gower said.

It seems like some of the players like Gower, fellow senior all-state running back Kirk Coomes and junior quarterback Trey Sides, all three starters as sophomores and freshman on the state title team in 2-1A in 2015, have been around forever. Coomes, now a 220-pound senior, is well remembered because he scored all 30 points in the 2015 state title game to beat Troy 30-29. He had over 1,300 yards rushing a year ago and is also one of the strongest players pound-for-pound in the state. Gower, a 190-pound linebacker and fullback, is one of the top small school linebackers in the state. Covington calls him a ball-hawk and says he watches more film than anyone he knows. Sides, equally known for his basketball skills, has been the signal caller since his freshman year and Covington told us it’s like having an extra coach on the field.  Senior Trey Thompson has also been a breakout player on this squad as has lineman Chris Van Kooten. Junior Treylan Gross has emerged out of the backfield this season as well. Junior Jon Hunnacutt is also a special teams weapon that is one of the best kickers in 3A. Coomes, Gower, and Sides are also team captains along with senior Braden Jueneman. They were not only instrumental in bringing the first state title home ever for Phillipsburg two years ago they are maintaining it.

Phillipsburg has established a championship culture with this group of seniors, juniors and the players that have graduated over the last few seasons. The Panthers are 55-9 since the start of the 2012 season. This year’s group of players, which 10 offensive starters and nine defensive starters returned from 2016, also wants to continue that success by leading by example for the youngster’s in Phillipsburg. They want to make sure the culture and success aren't short lived after they leave.

“We have what we call a championship culture and that’s not just about winning, it’s about being a good person on and off the field. Everyone wants to play for the person next to them. We also want to continue that culture and we play for all the little kids that look up to us. We want to leave that imprint for them in Panther history.” Coomes said.

As much credit that we can give to the group of seniors and the players before them. A lot of credit needs to be given to that of the Phillipsburg coaching staff, especially Covington. He has turned this program into an every-day contender that had never seen the playoffs prior to 2002 in the modern playoff era (1969-present). Covington and company keep this well oil machined primed for play every Friday night against top-notch competition. Covington is 125-40 as the head coach in 15 years. 31 of his Phillipsburg losses came prior to 2012.

Phillipsburg is on a 19-game regular season winning streak as they will get league rival Norton at home this Friday in a district match-up in week eight of the season. A win for Phillipsburg would give them the MCL title in back-to-back seasons. It would also likely clinch the district championship. Phillipsburg knows it's always a tough path but that's how they got to where they are at today.

“It’s a gauntlet every Friday night in our league. Our kids understand every Friday you have to perform against a quality team and a quality coaching staff. It makes it easier to make adjustments in the playoffs.” Covington said.

Special thanks to the Panther Booster Club for presenting this feature and radio interview (click here to listen) with Sports in Kansas.

Special thanks to Jacque Bretton for the senior photo.