v Faces in KS: Spencer Stewart - Sports in Kansas 
Warning: include(../includes/bodytag.php): failed to open stream: No such file or directory in /home/kansass/public_html/ks/news/index.php on line 36 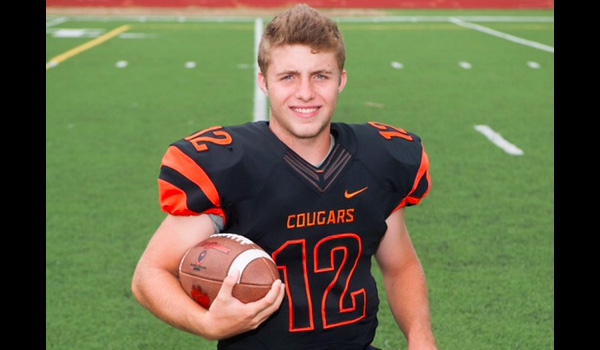 Shawnee Mission Northwest junior quarterback Spencer Stewart has been tearing it up in the stat column over the last two football seasons for the Cougars.

The gunslinger currently leads all of 6A in passing yardage this season with 1,949 yards after seven weeks. Not only that, he has thrown 15 touchdowns and also added another 165 more yards on the ground. Stewart is completing 64 percent of his passes. In nine games as a sophomore in 2016, he passed for 2,133 yards with another 17 touchdowns playing at the highest level of Kansas in 6A.

More impressive, Stewart only stands 5-foot-9 and weighs 165-pounds. Not your typical size for a quarterback prospect, right? It doesn’t bother Stewart from producing big-time numbers in big-class Kansas football. We had a pretty good quarterback over in Lawrence, Kansas under 6-feet a few years ago in Todd Reesing, right?

“I feel like height is overemphasized. I am able to use my feet well within the pocket to find the throwing lanes. I have not found my height to pose any challenges on my game. It does give me that underdog mentality though which motivates me.” Stewart said.

Sure, Stewart is going to get big numbers in a pass-happy spread offense of Bo Black, but the two have SM Northwest (4-3) with a winning record (over .500) for the first time in 10 years after seven weeks of the football season. Black is in his third year of the program since coming over from Hays. The Cougars were 1-8 in each of the last two seasons and are proving to be one of the most improved teams in 6A in 2017. Two of the losses to SMNW this year are from the #1 and #2 teams in 6A, Free State and SM East. They also lost to Lawrence, who was in some of the different rankings earlier this year.

“Coach Black is a very positive and fun guy to be around. His offense fits me well and I am glad that I am able to play for him.” Stewart said.

“Our goal as a team is to go 1-0 every week, so hopefully we can finish strong and go on a 4-game winning streak as we enter playoffs.” Stewart said.

If that four-game winning streak were to happen the Cougars would have to knock off Olathe North in the final regular season game this week. Olathe North (4-3) may not be the same team as we once knew but still a very solid 6A program with a solid schedule. Everyone makes the postseason in 6A so regardless of a win or loss this week the Cougars will have another opportunity. SM Northwest last won a playoff game in 2010 and only has a 10-12 record all-time in the state playoffs. They have one state title coming in 1981 with runner-up finishes in 1980 and 1982. We caught up with the junior gunslinger below in the latest Q&A edition of Faces in Kansas.

This feature is presented by KCI Auto Auction Inc. Find us online at www.kciaa.com

I started playing FCCJC tackle football in 3rd grade. I wanted to play so much that I researched tackle football on the internet, found FCCJC, and asked my Dad to sign me up.

My personal goals are to be one of the top 5 qbs in both TDS and YDS. As a team, I want to have a winning record and make a deep run in the playoffs.

You're probably labeled as undersized, but you can sling it, talk about what its like to be a smaller qb, disadvantage or advantages?

I think that one of the most over-emphasized aspects at the qb position is height. I am able to use my feet well within the pocket to find the throwing lanes within my offense line and the defense. I have not found my height to pose any challenges on my game. My height does give me an underdog mentality, which motivates me.

I believe we have a great chance to make a run this year. We are starting to play our best football at the end of the season when it matters the most. Our defense is playing at a high level and has really been stifling our opponents’ offense.  And we’re starting to fire on all cylinders on offense.

I believe that one of my strengths as a quarterback is my arm strength and accuracy. I also like to use my feet to extended plays and when nothing is there to take off.

Describe your connection with Goodpaster on the field?

Hayden and I have a strong connection on the field. He’s a great target for me and knows how and when to get open. The past two years have been awesome playing with him.

3 of our first 4 games were against teams who I believe are ranked in the top 10 in 6A Kansas, and those were very challenging games. But as a team, and even personally,  we’re stronger because of our strength of schedule. We have all made so many strides, have come together in so many ways as a team, and are really clicking heading down the stretch.

SMNW is a great place to play and I'm proud to call it my home. My teammates and coaches have created a family bond - there's nothing better than celebrating with those guys after a W.

Our offense is very pass heavy.  We’re a spread team with multiple formations and 4-5 wide receivers most of the time. Our offense creates a lot of problems for defenses because they can’t cover everyone.

If you like a fast paced game and a lot of throwing I would suggest come to one of our games. Our team is a lot fun to watch. Offensively we run a no huddle and are always trying to push the pace of the game. We’re probably one of the only teams in Kansas that throws the ball on more than 80% of our possessions.

There are really too many to mention them all. Caleb Addington has really become an emerging receiver for us. He’s made several timely, critical plays for us, as have Ty Lindeman, Caleb Johnson and Jamie Alexander. We’re led by so many special, hard-nosed Seniors on both sides of the ball. Our hogs in the trenches deserve so much credit for our success, anchored by guys like John Hanneman, Reid Stimach, Austin White and Travis Morrison, together with some great play by Jack Merritt, Floyd Martin, and B.J Harvey. All of our Seniors have really been tone-setters for our team.

l love to play the game. I'm a very competitive person so every time I time I step on the field I want to win. Whether its practice, working with my qb trainer or under the lights on Friday Nights.

Coach Black is a very positive guy and fun guy to be around. His offense fits me well and I’m glad that I am able to play for him.

I’d say our start this year has been going really well. This is the first time in 10 years that SMNW has been over .500 at this point in the season. Our goal as a team is to go 1-0 every week so hopefully we can finish strong and go on a 4 game win streak going into playoffs.

We started our offseason program in December and have been grinding ever since. I went to multiple qb camps, in Atlanta, Chicago and Denver. I have been training with Justin Hoover here in KC and with Tim Jenkins in Colorado to work on the fundamentals of my game. They have been great.  I also attended multiple college camps this summer such as Kansas State, Oklahoma State, Arkansas, Nebraska, Indiana, Louisville, Iowa State, Colorado State, Wyoming and William Jewell.

My plans are to play college football at the D1 level. My showings at all of the summer camps went really well and I’ve received some interest from schools. As one D1 offensive coordinator said this summer, if I continue to do what I’ve been doing with my game, the offers will come.

I’ve played baseball and ran track this past year.

My favorite thing to do being away from football would be to spend time with family and friends.

Hopefully I will be still playing football but if not I am considering becoming a real estate lawyer and helping my Dad in his law firm.

I would say my favorite subject is History. I try to do my best in school and am an A/B student.

My dad is my role model. He sets a positive example for myself, my two brothers and my sister.

When I have free time I love going to Colorado or one of my farms to hunt and fish.