v Faces in KS: Brayden Francis - Sports in Kansas 
Warning: include(../includes/bodytag.php): failed to open stream: No such file or directory in /home/kansass/public_html/ks/news/index.php on line 36 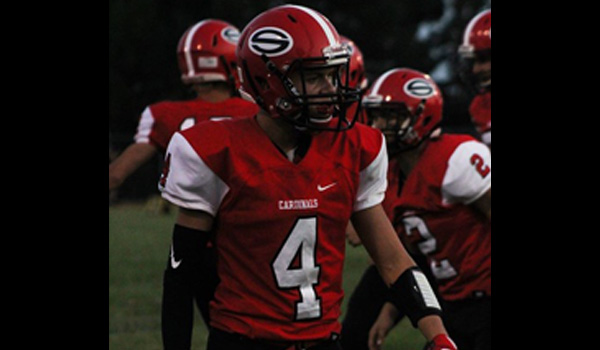 Sedgwick High School is a 2-1A school in football with an enrollment of 161 students located in Sedgwick, Kansas. A lot of the talk over the last several years with Sedgwick, at least by us at Sports in Kansas, has been about 2015 alum Brylie Ware. It still is as he was the Big 12 Newcomer of the Year at Oklahoma as a sophomore baseball player last spring. Sedgwick is also home of former NFL punter Brian Moorman, who is also an alum of the school in the early nineties. While Ware and Moorman may be rare cases of stardom from small-town Kansas, the last two seasons another Sedgwick player is making a name for himself in the small school ranks of Kansas and that's senior receiver and kicker, Brayden Francis.

Francis emerged last year as one of the top small school receivers in the state after he had 814 receiving yards and 15 touchdowns. He also kicked 36 PATs and a 35 yard field goal over 10 games. This season not much has changed as the 5-foot-10, 160-pounder, has 725 yards and 12 touchdowns in six games to be among the leaders in all classes of Kansas. Francis has 27 touchdowns in 16 starts, which is flat-out impressive and sounds made up. He has also kicked 24 PATs and two field goals, with a long of 37 this season. Francis has also kicked seven balls out of the endzone for touchbacks in six games.

Francis best bet may be to go to college as a kicker and definitely is something he want's to pursuit. We aren't out to set unrealistic expectations but never count out a small-town kid in Kansas from kicking or punting on a big stage because its happened multiple times over the years. Sedgwick's Brian Moorman went to Pitt State on a track scholarship and ended up walking on to the football team being an All-American punter and was one of the best punters in the NFL for multiple years. The current punter at Kansas State, Nick Walsh, is a 2-1A product out of Lyndon. Beloit's Scott Fulhage was also a top punter in the NFL in the early 1990's.Kendall Trainor from Fredonia was an All-American kicker at Arkansas in the late 1980s. We could go on and on at the success that wasn't expected from a lot of small town kids in Kansas, specifically in just special teams. Perhaps one of the best special teams player ever in the NFL was Leoti's Steve Tasker of the Buffalo Bills, who stood just 5-foot-9 and 185-pounds.

Francis will worry about the next level later as he wants his team to hit a winning streak. The Cardinals, led by head coach Jeff Werner, aren't where they want to be with a 2-4 record. With that being sad, the record is a bit deceiving for a team that we consider to be a contender in the 2-1A playoffs. The four teams they lost to combine to be 21-3 and only one of those are in 2-1A.

Its not just Francis either that is a big time play maker. Junior Quarterback Hooper Schroeder has been starting since his freshman year and is among the leaders in 2-1A in passing yardage. Kale Schroeder, sophomore brother to Hooper, is also another valuable receiving threat for the Cardinals.  Neal Bever is one of the top defensive backs in the state as he has five interceptions on defense and 16 over the last two years combined.

Sedgwick has made the playoffs six years in a row and will be looking for a seventh as they will continue district play this week against Moundridge in week seven. The Cardinals have never got past the round of eight in the history of their program and will look to change that this year. Sedgwick is 5-12 all-time in the Kansas playoffs.

My dad was a part of a very good Silver Lake football team when he was in high school. He won a State Title his senior year. Just hearing all the stories he told me as a kid just made me interested in playing.

My goals are to become an All-State receiver for a second year in a row and an All-State Kicker. I would also like to make the All-Metro team.

Yes,  I think we have a very good chance to make a run. We’ve played a rough schedule early, and learned a lot about our team.

What makes you such a force as a receiver?

Sedgwick has a history producing great receivers, so I got to learn from those players my first couple years of high school football. What I learned from them,was great route running, taking what the defense gives me, and first and foremost catching the football. I’m blessed with speed, which has been a great attribute.

Describe your connection with Hooper Schroeder on the field?

Hooper Schroeder has been my quarterback since Junior Football. He and I have great understanding of what we are thinking as far as routes and coverages . We have used hand signals to communicate mid-play. Hooper happens to be one of my best friends, too.

You guys have played a loaded schedule talk about that?

My head coach Jeff Werner doesn’t believe in playing a soft schedule. He wants us to improve each week regardless of winning or losing. He pushes us to be great, and with the overall goal of being a playoff team. We believe that our schedule will be help as we progress through the season.

I agree. Neal has a great instinct for the ball defensively, and has brought a high level of competitiveness to our team. He too has been an offensive weapon. I wish I had had the opportunity to play with him since Junior Football as well. He also happens to be one of my best friends.

It’s a spread offense formally know as “Air Raid”. The idea is too spread the field and give more room for offensive players. We have added a fast paced No Huddle approach to the offense. The offense is known for Passing and Receiving yards, but Sedgwick has had multiple thousand yard rushers.

It’s a great small school atmosphere where the community is involved, we have great crowds; win or lose there are always a lot of points scored.

We have multiple weapons on both Offense and Defense. Cardinal Pride is the strength in our team. We act and play as a family of one. We take pride in it being about the team and not individual players.

Football is a very competitive sport, and I like to compete. I also enjoy the team aspect of it.

Practices are fun and upbeat, but Coach Werner and Coach Mabry keep us focused. They remind us that Football is fun and we should enjoy it.

Not the way we wanted it in terms of Wins and Losses, but we are starting to play well as a team now, and I look forward to the rest of the season.

Dedication, Perseverance, and taking it one game at a time.

We as a team lifted weights and conditioned throughout the summer.

Yes I have interest. We will see how the future plays out.

Hanging with my friends and playing Xbox (Specifically Madden)

Graduated College and hopefully kicking in the NFL (a goal of mine).

Well if you want the truth. It ‘s P.E.  I am an A-B student. I do enjoy my English and Spanish classes

My parents because they are always encouraging me and supporting me in everything I do.

Kilroys (Pizza/Sandwich Shop) and Cy’s Hoof and Horn Supper Club. Both are great places too eat.

I’m probably the pickiest eater you will ever meet. If it’s not Mac and Cheese or Nachos I am probably not eating that night.