v Faces in KS: Trenton Jones - Sports in Kansas 
Warning: include(../includes/bodytag.php): failed to open stream: No such file or directory in /home/kansass/public_html/ks/news/index.php on line 36

Trenton Jones of Conway Springs is leading the nation in yards per carry. 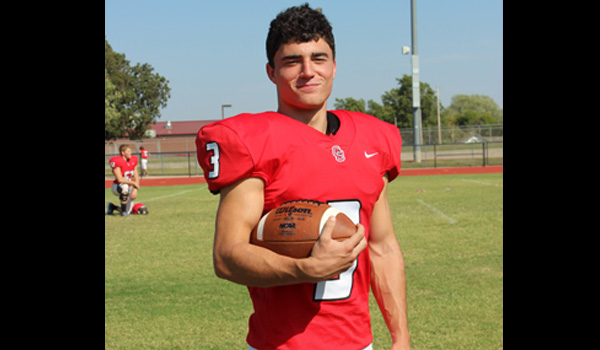 Trenton Jones, senior back at Conway Springs, stands just 5-foot-8 and 160-pounds, but he has put up some of the best numbers we've seen in Kansas this year, heck maybe in quite some time. When we mean some of the best, we mean it, video-game numbers, numbers that seem like they are made up.

Jones has rushed for 912 yards in five games. Sounds pretty good, right? Well he has done it on just 31 carries. His average is 29.4 yards per carry. He has carried the football 31 times and has scored on 15 of those. His rushing yards per carry rank first in the nation, according to MaxPreps, with anyone that has at least 20 carries in 2017. His biggest and shortest performance came at the same time. He had four carries for 242 yards and three touchdowns in the 54-0 blowout win over Douglass in week three. To give you a better idea on the limited carries, the leading rusher by yardage in Kansas for 2017 is Ivan Webb of 5A KC Schlagle who has 148 attempts for 1,645 yards in five games. Webb's attempts are also second in Kansas this season behind 149 attempts by Josh Seabolt of Cimarron (3A).  It hasn't been possible for Jones to get more carries because he scores nearly half the time he touches it and he hasn't gotten time in the second half.

It's not just Jones either, senior quarterback Colton Terhune has 38 carries for 641 yards  (14 TD) for an average of 16.9 yards per carry. Senior Riley Akiu also is averaging over 14 yards per touch in 2017. The Conway Springs single-wing offense has 2,696 yards rushing over the first five games of the season for an average of 539.2 per game. The competition becomes better from here on out but the state record for rushing yardage per game in a single season is 446.4 set by Holton back in 2003. Holton won the 4A state title the same year. Rushing yardage and Conway Springs is no secret, it wasn't long ago that current K-State starting defensive end, Tanner Wood, would rush for a state record 659 yards in a game back in 2012. So big credit is due to the offensive line for the Cardinals for paving the way for these stud backs in 2017.

As you can probably tell by his picture above, Jones performs very well in strength and conditioning. He's a rare combination of speed and power for his small size.  At just 160-pounds, he benches 285, has 4.5-4.6 40-range speed, and has a 36-inch vertical. He is also a tennis player. How many high school tennis players do you know nearing the 300-pound mark in bench that are all-state caliber running backs? Its not just Jones either in the weight room as Conway has a heck of a strength program, lineman Matthew Lange and Terhune were two of the strongest prospects pound-for-pound we saw at the Sharp Performance combine last May. Lange, one of the top two-way lineman in 3A, benches 325 at 6-foot-1, 225-pounds. Terhune, the quarterback mentioned above, weighs just over 170-pounds, and did 19-reps on the bench at 185-pounds. Terhune also has a great arm, but it may not be needed until they get some competition. In the first two weeks, Conway had only thrown two passes. The off-season has definitely prepared Conway Springs for the type of season they are having and planning to have from here on out.

The Cardinals, led by head coach Matt Biehler, are 5-0 on the year and will take on 4A-I Mulvane (3-2) this week. You should expect a more competitive game than what we have been seeing as of recent. On the season CS has outscored opponents 327-to-53 in five weeks. We really feel like the Cardinals are a big contender on the 3A west however they do play in one of the best districts in Kansas with only two teams getting out of the four in Chaparral (4-1), Cheney (5-0), Conway Springs (5-0), and Garden Plain (5-0). The next four games should really give an identity to see how good Conway actually is. Districts will begin a week from this Friday. Conway Springs has seven state titles as a school in football, all coming from 1998-to-2011 (1998, 2001, 2002, 2003, 2004, 2008, 2011). The Cardinals missed the playoffs last year in their loaded district and have not won a 3A playoff game since 2013.

Want to know what makes this 160-pounder such a special player? Find out in the latest edition of Faces in Kansas below.

I grew up watching football with my family so I always knew I wanted to play. Plus Conway Springs football has a deep tradition that you want to be a part of.

That our team continues to play well and have a run for a state title.

Your yards per carry are insane, did you expect this, talk about that?

Ha, I don’t think anybody would have expected it, but with our work ethic during the offseason we knew it was going to be a special season. Our line just clears holes for us backs and gives us some space to work with.

What makes you such a force as a running back?

I feel I have a good balance between speed and power.

Our offense is based around a heavy run but we can still pass if we need too.

For anyone that hasn’t seen a Conway game, why come to one?

The atmosphere is great and how often do you see a team run the single wing.

How big of a force are players like Matthew Lange and Colton Terhune?

They’re huge. Matthew is a beast that controls the line on offense and defense, and with Colton being able to run the ball like he does the defense has a hard time adjusting.

It’s a sport that has to be played as a team.

It’s great! Coach Biehler is respected around the state and to play for somebody who’s respected like that shows me how lucky I am here.

We’ve had a solid start, but with districts coming up we’ve got to keep improving and can’t be satisfied.

What will it take to make a 3A run?

We’re just going to have to stay healthy and strive to get better every week.

Definitely, we’ve got some talented guys back who want to prove something this year.

Our team has playmakers everywhere, the skill guys have speed and power plus our line is one of the best we’ve had in years.

During the winter the team lifts and conditions together. In the summer we all attended performance camp where everybody bought in and gave us one of the best summers yet .

Not sure, hopefully happy and not in debt.