v Labette Bank Athlete of the Month: Ridge Smith - Sports in Kansas 
Warning: include(../includes/bodytag.php): failed to open stream: No such file or directory in /home/kansass/public_html/ks/news/index.php on line 36

Ridge Smith (11) and Columbus are 5-0 to start the season. (photo: Carolyn Eddington) 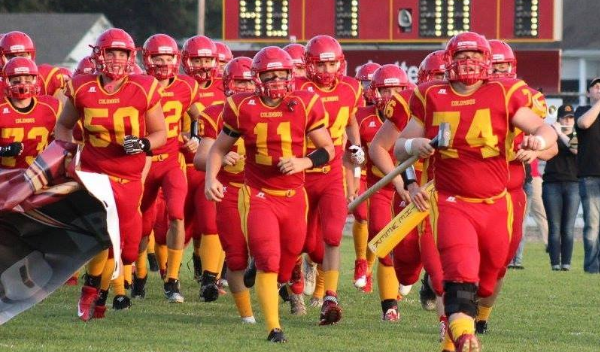 The Labette Bank Athlete of the Month for their performances over the month of September is Columbus senior quarterback and linebacker Ridge Smith.

The 5-foot-10 180-pounder is getting it done on both sides of the football for the 4A-II #1 ranked Titans. On offense he has pased for 564 yards with six touchdowns, while completing 63 percent of his passes. He has also added three rushing touchdowns. On defense he has registered 32 tackles over five weeks in limited time, due to Columbus beating three opponents by at least 27 points and two by 47 or more. Last season Smith passed for over 1,100 yards and had 18 combined touchdowns.

Columbus (5-0), led by head coach Dan Grundy, will be back in action this Friday against CNC league rival Galena on the road. Galena is also 5-0 on the season and receiving votes in the 3A rankings. The Titans have won their last five meetings dating back to 2012.

Labette Bank would like to congratulate Ridge Smith and the Columbus Titans for their efforts this season!