v Faces in KS: Ivan Webb - Sports in Kansas 
Warning: include(../includes/bodytag.php): failed to open stream: No such file or directory in /home/kansass/public_html/ks/news/index.php on line 36 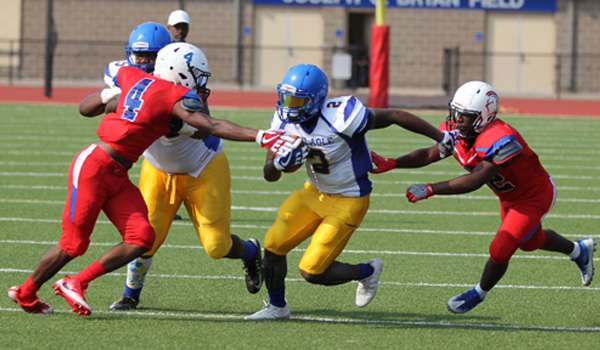 Inner city football in Kansas City hasn't had a lot of success on the Kansas side over the years. It has also been criticized for strength of schedule and lack of numbers at different programs over the years. It has seemed to be more widely known for basketball success over time, especially at a school like Schlagle. Schlagle is also the home to 1993 alum Maurice Greene, once named "The Worlds Fastest Man". Schlagle has just one football playoff win as a school. Harmon, Schlagle, Sumner, Turner, Washington and Wyandotte have combined for just seven football playoff wins and zero state titles since 1969. Programs like Aquinas, Blue Valley, Miege, Mill Valley and SM East have seemed to take up the majority of the hype of Kansas City metro football on the Kansas side over the last several seasons. Before that it was the Olathe schools, who have struggled the past two seasons.  However, hype is coming to the way of 59th and Paralell at F.L. Schlagle High School this season in Kansas City, Kansas. The reason is senior running back Ivan Webb.

Webb, a 6-foot-0, 200-pound, running back, leads the entire state of Kansas in rushing yardage after four weeks of the season. Through those four games he has 1,234 yards and 15 touchdowns. That sounds like good enough stats to almost already make a 5A all-state team and his team is guaranteed at least five more games this season. Webb's biggest performance last week where he had 378 yards and seven touchdowns in the 56-8 win over KC Washington.

"Ivan Webb is the rare combination of power and speed. He has shown the ability to outrun and over power teams so far this season. He is the most complete RB I have seen in the area in the last 8-10 years that I have followed." said David Brox, who covers the KCAL and KVL for SHUKC.

Schlagle has become Running Back High School in the KC area recently. They had Cornelius Ruff last year who had 2,019 yards and 27 touchdowns and over 3,400 in his career. Ruff is now at Kansas State. Before that it was J'Veyon Browning who rushed for over 1,100 yards as a senior and went on to sign with Northern Iowa. The way Webb is going he should purpass Ruff as he is on pace for 2,777 yards and 33 touchdowns in nine games. The Stallions get eight regular season games and the new format in its second year in Kansas allows every team to make the playoffs in week nine. The all-time Kansas rushing record in a single season, published by the Kansas Sports Hall of Fame, is 3,382 set by Kipp Connell of Claflin back in 1998. Webb's 308.5 yards per game rank second in the country for rushing yardage per game according to MaxPreps.

Webb's passion for football is so large that he sleeps with a football before game nights. But it's so much bigger than the inflated ball and playing on Friday's. He plays in memory of his late father who passed away when Ivan was just 10 years old. It also brings the city together on Friday's in the fall. It's also big to him as he grew up moving house to house with just his mom and three boys living in poverty. Football is a way to make his family proud.

"The passion I have for this game is beyond just an inflated ball, I love how close it brings my city together. I love seeing the fans enjoy the show we put on with all of the crime we have going around every day in my community, it's good to see everyone having a good time. With all the struggles I saw growing up in my childhood I want to make a way for myself and make my family proud." Webb said.

Webb is grounded. He knows what he has to do to get to the next level. The day after rushing for 378 yards and seven touchdowns he was at his job at Walmart. Webb may be the best Walmart employee running back in the country, right?

Interest should start to rise in recruiting for this 2018 Kansas City back with 4.55-4.60 forty-yard dash speed with nice size, but right now he is focused on the 2017 season and getting Schlagle on a run in the 5A playoffs. Schlagle is currently 4-0 and will play KC Wyandotte this week. We caught up with the leading rusher in Kansas below.

I was always around football growing up with my 3 brothers we all played sports.

My goal is to win a state championship game for my hometown.

What makes you a force as a back?

I feel that I am pretty elusive and I am patient. It is the best thing ever, the environment is wild! From the southern style bands, crowd is crazy here, they show so much love for us.

What motivation do you use to play every game?

My Daddy he passed away when I was 10 years and my humble upbringings moving house to house with my mom with three boys in poverty and all the struggles and things I've seen in my childhood I want to make a way for myself and make my family proud.

The passion I have for this game is beyond just an inflated ball, I love how close it brings my city together on Fridays and seeing all the fans enjoy the show we put up with all of the crime we have going around every day in my community it's good to see everyone having a good time.

What has it been like to play for your coach?

It has been great at Schlagle with my Coach he treats every last one of us as if we were his own sons. I would describe it as unfinished business knowing we have an Aquinas or a St.James waiting to get a crack at us soon as the second round of the playoffs come around and we will be ready.

You guys are starting to be known as RB High School in KC here lately, how did that all come about?

It started with J'Veyon, Then Neil now of course yours truly and it's not a product of the system it's just what we do around here on 59th & Parallel we love to run the ball it's our bread and butter but we know it's going to take a good passing attack to get to where we need to go with it.

Can you make a run in the 5A playoffs?

A run in the playoffs is the ultimate goal here at Schlagle we are playing for the top spot and who ever is in our path we have to handle our business.

Who are other key playmakers on this team?

Other key playmakers would be Tylen Wallace my RT he is an absolute amazing lineman on both side of the ball, Larmon Witt is hands down and All-State Receiver even though his numbers are not that ridiculous but he has 4 TD's so far so we should see him make another All-League performance, my whole entire defense is ridiculous with 2 watch list players at Safety Gavin Williams and James Hampton at Linebacker also.

Me and my team trained the week after the playoff loss to now with constantly lifting and conditioning even during holidays it's didn't make any sense but Coach Williams is the man with the plan.

What’s it like to be an under recruited player?

What it's like being under recruited really is not a great feeling knowing I'm 15th in the nation in rushing total yards and first in my state. I always tell myself God has a plan for me so I remain calm and play ball and get good grades like my grandparents told me.

I plan on majoring in sports medicine to be a physicians assistant if my crack for the league is not successful and do more schooling. I have some interest from just a select few.

I also run track as my second sport so far in high school.

10 years, I honestly see myself playing on Sundays financially stable starting a beautiful family to carry my last name on and be the father my Dad couldn't be for me.

Spend time with my extended family that I dont get to see as much.

Favorite subject is theater because I've always had a nack for acting and doing improv.

My role model is my Granddad Oscar Webb he has always been here for me even when I wasn't there for myself, he is my world and I look up to him as if he was my Dad because he raised the man himself.

Favorite place to eat in KCK?

THE KITCHEN OF THE WEBB HOUSEHOLD! My Grandma throws it down yes. Other than that Gates is the best I've been to.

That I work at Walmart and I sleep with a football the night before game day like a weirdo, it's my good luck.