v Faces in KS: Jordan Schippers - Sports in Kansas 
Warning: include(../includes/bodytag.php): failed to open stream: No such file or directory in /home/kansass/public_html/ks/news/index.php on line 36

Jordan Schippers of Colby is turning into one of the top junior players in KS. (submitted photo) 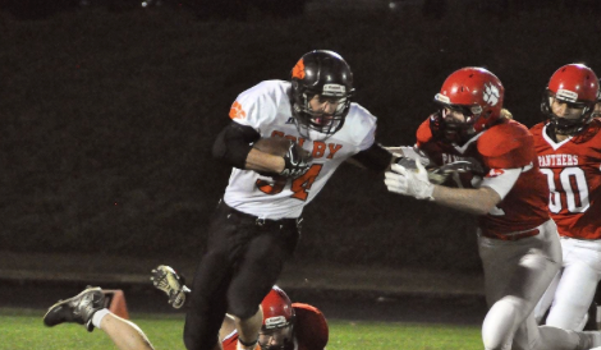 The western Kansas town of Colby that is just over 5,400 people on I-70, known as "The Oasis on the Plains", hasn't had a ton of success in football over the years. The 2017 season is a different story so far. The Eagles are off to a 4-0 start which was reported to us as believed to be for the first time since 1992. 25 years, sounds almost made up, right? A big reason for the success has been their junior do-it-all athlete, Jordan Schippers.

Schippers was a guy we first heard about last year so we decided to check out his Hudl video. We were very impressed with the 6-foot-1, 185-pound hyrbrid running back/reciever. He has great ball skills, was always open and plays very fast in pads. It didn't look like we were looking at a sophomore in high school at the time. Fast forward to this year, Schippers is as good as advertised. He has 465 yards rushing this season for over 10 yards per carry on the ground to go along with six rushing touchdowns. As a receiver he has caught 17 balls for 215 yards and a touchdown. His career numbers are now at 1,922 rushing yards with 26 touchdowns while going for 1,258 receiving yards for 18 more scores. He also has 54 career tackles on defense dating back to last fall and has two sacks this year as a junior.

It's not just Schippers either for the success of the Eagles. Colby is very balanced offensively but does like to run the football first, averaging over 211 yards per contest, while 153 yards per game come through the air. Senior quarterback Zach Hart is completing 66 percent of his passes. Sophomore Calvin Stapp leads the team in receiving with 282 yards through four games with two touchdowns. The defense has also been stingy allowing only 34 points this season.Junior Tucker Branum leads the unit with 23 stops through four games.

Schippers loves football so much that growing up he slept with a football in his hand, but let's not forget he isn't just an athlete either. He's an exceptional student as he boasts a perfect 4.0 GPA with his favorite subject being math. He hopes to be a football student athlete at the next level and we believe he is going to have that opportunity if he continues to do what he has been doing.

Schippers may develop into a college prospect next fall as he still has all of this season left to play and his senior year. He features 4.5-4.6 range speed and has a 33-inch vertical leap. It's still unclear if he would project better as a running back, receiver, or outside linebacker at the next level, but he still has a lot or room for development at Colby.

Right now his focus is on getting the Eagles into the playoffs for the fourth consecutive year. The Eagles have made the playoffs but the last three seasons records are as follows: 5-5, 4-6, and 3-7. Colby only has one playoff win as a school and that was 33 years ago in 1984. The Eagles are in a four-team district in 4A-II with Scott City (4-0), Concordia (2-2) and Goodland (1-3). Congrats to the Eagles and first year head coach Rees McKinney on a 4-0 start so far in 2017. Colby will be at 4A-II power Holcomb (3-1) this week, a team that they have loss seven straight to. We caught up with the oustanding Western Kansas junior below in the latest edition of Faces in Kansas.

Be sure to nominate the Nex-Tech Wireless Western Kanasas Athlete of the Month with Sports in Kansas, by emailing Chet Kuplen at sportsinkansas@gmail.com

I started playing football in 3rd grade for my local little league team. From then on, I have always loved the game of football.

Before school ended last year, our team made it a goal to beat Scott City. I think this goal has morphed into a drive to make it to a state title game. We take it one game at a time, but we still have eyes on our ultimate goal. Personally, this season, my goals are to be a playmaker, a leader and to play the best football I possibly can.

What makes you such a force on offense?

I think my speed and vision make me a playmaker. I am also very versatile, being well rounded in the different aspects of offense like receiving, rushing and blocking.

The beginning of this season has definitely been exciting, not only in our school, but in our community as well. I think this is something that Colby had lacked in previous seasons.

What has the town been like after the first 4-0 start in over 20+ years?

Our start has definitely helped get the community involved and supporting us this season. Many people have talked about how we are playing at a level they haven’t seen in a long time.

I think my guys and I can definitely make a run this year. Our team is incredibly close-knit, and I think that’s a quality that teams need to make it far in a season. I have never been a part of a better brotherhood.

Calvin Stapp on offense has blown up this year. Isaac Rosales has also had monster plays. When teams focus more on covering me, they leave these beasts open to make huge plays. Our defensive line also does big things and it includes: Xavier Slaven, Parker Hammel, Kyler Britt, Aaron Kurth and Sean Rall.

I went to many camps this summer, including the Sharp Performance Combine, and I also spent much of my time in the weight room.

Coach McKinney keeps us in check. He always ensures that we are focused and he pushes us everyday.

One of my goals has always been to play college ball.

When I am not in sports or training for them, I like to be outdoors hunting, fishing or relaxing with friends and family.

I see myself coaching or playing a sport.

My favorite subject in school is math and I am currently a 4.0 student and work hard in class.

My role models are my parents because they work hard for me every day and have always pushed myself to become the best I can be.

Best place to eat in Colby or the surrounding area?

The best place to eat in Colby is El Dos De Oros. Definitely try out the nacho steak fajita.

I use to sleep with a football every night when I was little.