v Faces in KS: Nick Allen - Sports in Kansas 
Warning: include(../includes/bodytag.php): failed to open stream: No such file or directory in /home/kansass/public_html/ks/news/index.php on line 36 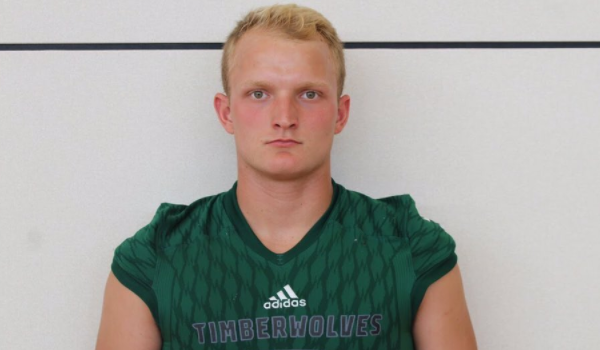 One of the best linebackers in Kansas that you probably haven't heard of is a senior this season at Blue Valley Southwest. His name, Nick Allen. Allen is a 6-foot-0, 220-pound senior that may be classified a bit undersized, as far as height goes, to the D1 college recruiters, but he is a tackling machine with 46 tackles over the first three weeks of the 2017 season. His 46 tackles rank fourth in all classifications of Kansas and second in Class 5A on the Sports in Kansas defensive leaderboard.

Why haven't you heard much on him? Well the Eastern Kansas League is loaded with state championship teams, that have all highly touted players that many media outlets, including us, have covered repeatedly. Teams that play in title games or win league championships are going to get more coverage, there's no denying that. With Southwest being a fairly new high school trying to establish some football tradition, it may often slip through the cracks that they also do have major talent. It also doesn't mean that the Timberwolves aren't one of the rising teams in the Eastern Kansas League. With that being said, you can be a darn good football team with a losing record in the states best conference. Just look at BV North right now with a 1-2 record, arguably one of the states top 6A teams and even Southwest on the rise at 1-2. Defending 5A champ Mill Valley finished fifth in this conference last year with four losses and won the 5A title. There are no weeks off in this conference but we do know one thing, Southwest features one of the best defenders the Eastern Kansas League has to offer this season.

Allen has been playing football since he was eight years old and quickly fell in love with the sport. He has transitioned nicely onto the varsity scene over the last few years with a great work ethic in the off-season. He has worked repeatedly since the sixth grade with 10-year NFL veteran Mark Simoneau, a Smith Center native that was an All-American at Kansas State, that is also in the College Football Hall of Fame. Not only has Simoneau helped him in strength and conditioning, he has also helped with on field tackling. Simoneau runs Simoneau Sports Performance in Overland Park and is helping with this years BVSW football team under head coach Anthony Orrick.

We know Allen is producing on the field with his tackles as we mentioned above, but he has also turned himself into a college prospect with his hardwork in the weight room this past offseason. Allen, an All-EKL selection as a junior last fall, has bulked up 15 pounds from last season, runs a 4.62 forty yard dash, has a 34.5 inch vertical, and squats 440 pounds. So maybe the height is a concern, but is it really? It sure wasn't for Simoneau who barely touched 6-foot as an NFL linebacker and was onnce near the top in NFC for tackles for the Philadelphia Eagles. Allen wants to prove this season he has what it takes to play football at the next level and hopefully a program will give him a shot. He gets his opportunity week in and week out against some of the states best competition.

"I am really hoping to play college football. I am waiting for all of my options to show any interest." Allen said.

For right now Allen's mind is on the high school season. The Timberwolves are currently 1-2 but have had some key players step up this season including Allen, who was a first team non-senior from Sports in Kansas last fall. Junior Quarterback Will Eldridge is second in the state in passing this with over 1,000 yards after three wees. His favorite target has been Billy Bartlett who leads the state of Kansas in recieving. Southwest may be 1-2 but coach Orrick has BVSW as a team looking to turn the corner. Last season they had an upset victory over Aquinas and knocked off Pittsburg High in the playoffs. They may have just been 2-8, a record very misleading to those not familiar with the EKL, but five of their losses were decided by a touchdown or less. Orrick has the Timberwolves heading in the right direction.

"He is a great coach but a better human. Last year my dad was battling cancer and wasn't able to be exposed to any baceteria around the house, so Coach would take my sweaty jersey and dirty clothes, and clean them himself. I wouldn't ask for a better coach and can't wait to see where he can take this program." Allen said.

Orrick and Allen will be back in action this Friday as the Timberwolves with look to improve to 2-2 on the season as they take on Gardner Edgerton (0-3) in an away game at 7 p.m. in Gardner. We caught up with the outstanding senior linebacker below in the latest edition of Faces in Kansas.

-I’ve been playing football since I was 8 years old. I’ve loved every second of it and hope there are many more seconds to come.

-My goals this season are to create a great atmosphere around Southwest’s football team, have a winning record, and obviously make a solid run at state.

-Mark Simoneau is a huge contributor to my tackles. He has taught me so much and is the reason I am the football player I am today.

How brutal is your schedule and what will it take to make a run this year?

-The teams we play are all going to be tough, but in order for us to make a run at state, we have to play fast, smart, and physical.

Your offense seems to be tearing it up with passing yards, talk about some of those guys?

-Will Eldridge is a great QB and a great leader. Will and our center Kyle Murphy are two great leaders for the offense and work so hard on the field and in the weight room.

-Chris Logan, Cordel Duhart, Jake Lamfers, and Billy Bartlett are all great football players. They are all hard workers and are huge contributors to our teams skill set.

You have really got it done in strength and conditioning, what’s your secret, what kind of training goes into this?

-I have worked with Mark Simoneau since I was in 6th grade. I would never be where I am today if Mark didn’t push me like he did. Working 4-5 days a week at SSP (Simoneaus Sports Performance) along with weights class helps make me stronger and faster. You have to train smart and hard. Results won’t just appear, you have to make them happen.

What is it like to play for Coach Orrick?

-Coach Orrick is a great coach but a better human. Last year during my junior season, my dad was battling cancer and wasn’t able to be exposed to any bacteria around the house, so Coach Orrick would take my sweaty jersey and dirty clothes and clean them himself. I wouldn’t ask for a better Coach and can’t wait to see where he takes this program.

-I am hoping to play college football. I am waiting for all of my options to show any interest.

-I play baseball and have since I was 8. Along with football, I love baseball.

-Hunting and fishing with my dad are my main hobbies. I enjoy hanging around my football buddies too.

-In 10 years, I will be on my way to become an orthopedic surgeon along with my hopefully lovely wife

-Math is my favorite subject in school and has been my whole life. I expect A’s out of myself but will tolerate a B or two but nothing under a B.

-My father is my role model. He is THE toughest man on the planet and can withstand anything. He is the kindest person also. He is the type of guy who will drop whatever he is doing to help someone else out. I hope I will be like him when I’m older because he is the best father to my sister and I and an amazing husband to my mom.

-Chick-Fil-A is by far the greatest place to fill up. Their food never gets old and always tastes amazing.

-The average person wouldn’t know that I use to have a completely messed up set of teeth. After a surgery and 3 years of braces, I have a nice smile but also have two fake teeth.