v Faces in KS: Carter Putz of Miege eyes state record - Sports in Kansas 
Warning: include(../includes/bodytag.php): failed to open stream: No such file or directory in /home/kansass/public_html/ks/news/index.php on line 36

Carter Putz is a TD away from breaking the KS State Record for TD passes. (Shawnee Mission Post) 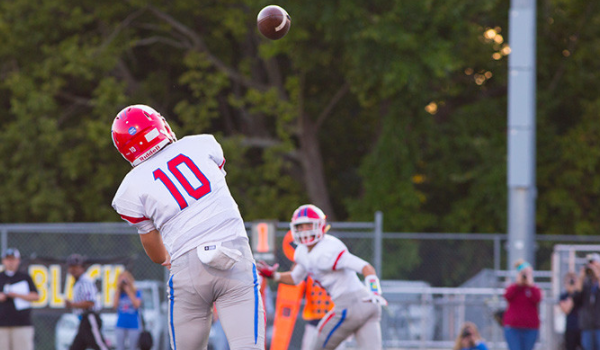 All eyes will be on Bishop Miege (2-0) senior Carter Putz on Friday night, as the quarterback seeks a spot in the history books. Putz, a Notre Dame baseball commit is just one touchdown pass away from becoming the states all-time leader for career touchdown passes. Putz is at 92 and is currently tied with Shannon Kruger of Silver Lake’s mark set in 1997.

Putz and the Stags will make the 20 minute drive to Overland Park for an Eastern Kansas League matchup with St. Thomas Aquinas (2-0) in what should be the best game to watch in all of the state on Friday night. Miege beat Aquinas 48-21 last season on their way to a third straight class 4A-I state title. The Stags have won the past five meetings in the series.

Miege will bring in a perfect 2-0 record and have won 14 consecutive games. The Stags have their first two games this season over Blue Valley and Gardner-Edgerton by a combined score of 103-10. While the Miege defense has been dominant so far this season, the offense has been just as good led by Putz.

Putz has dominated opponents since his sophomore season when he became the starting quarterback for the Stags. Putz played in just one game his freshman year, but threw for 3,187 yards his sophomore season to go along with 36 touchdowns and just five interceptions. His junior campaign was even better as he threw for 3,264 yards, 50 touchdowns and just three interceptions. If the track record continues for Putz then he is set to have an even better senior year. Through 29 games Putz has thrown for 6,945 yards, 92 touchdowns and 10 interceptions. Putz has a 26-2 record as a starter in those 28 career starts and has only lost to one team in 6A Blue Valley, twice (2015, 2016). Putz has been a two-time Sports in Kansas Non-Senior pick at the Quarterback position in 2015 and 2016, then last year won his biggest honor as the Kansas Gatorade Player of the Year.

The senior has had many big targets to throw to over his time in a Stags uniform including Jafar Armstrong and Landry Weber. The last three seasons it was Armstrong leading the cast of Miege receivers with three straight all-state seasons, but with his departure to Notre Dame, a new star could be in the making. This season Putz has found his favorite target in sophomore Daniel Jackson with 10 catches and 210 yards with two touchdowns, so look for him to continue being a deep threat for Putz.

During the spring Putz can be found on the baseball diamond as the starting second baseman for the Stags baseball team. Miege is also extremely successful on the field and competed at the 4A-I state tournament last season for the third straight year, so Putz will try and guide the team to a fourth straight appearance in May. Putz was named all-league once again last season and will try to continue adding to his numerous accomplishments.

Putz has excelled in both baseball and football through the years, but the ultimate decision to choose baseball was one Putz will always remember. He said he decided after his sophomore year that the best chance he had at playing for Notre Dame would be on the Fighting Irish’s baseball team, so the decision was made. Putz will continue his career in South Bend, Indiana next school year.

Miege was ranked #1 in the Kpreps Poll this week and has been for quite a time in 4A-I as no other team has ever won the 4A-I state title since the classification began in 2015. The Stags, also ranked #1 in all-classes in the Sports in Kansas/Rack Performance Super 25, are going for four titles in a row this year. Since the 2013 season they are 48-4 under head coach Jon Holmes. Only Rossville, three-time defending 3A champ, has a better record in that time period with a 53-4 record. The impressive thing is Miege has done this in the states best league. The Stags also feature returning all state players on defense in linebackers Joe Watskey and Dylan Downing. Brison Cobbins, Jasir Cox, Cameron Clark and Cameron Key have all had big years so far as well.  Big task on hand as they get the #2 team in the Super 25 Poll this week in Aquinas.

Q: What are your expectations for this season?

A:My expectations for this year is to be a leader and hopefully lead my team to a fourth state title.

Q: How do you think playing in a league with 5A and 6A teams prepares you for the playoffs?
A: It's huge for us. We know we are playing some of the best competition in the state in the EKL, so when we do drop down to 4A we know we are prepared for everything.


Q: What made you choose Notre Dame for baseball?
A: Notre Dame has been my dream school since I was a kid. I knew I wanted to go there, so when I got my offer I couldn't pass it up.


Q: What made you choose to continue your baseball career?
A: I chose to play baseball because I learned the summer going into my sophomore year that it was my easiest way to reach my goal of playing for Notre Dame.


Q: What will it be like attending school with Jafar Armstrong again when you go to South Bend? Have you talked with him much lately?
A: It'll be really fun going to school with Jafar and Colin Grundhard again. We've texted each other throughout the summer, which is cool to be able to stay in touch.


Q: How long have you been playing baseball? Football?
A: I started playing football and baseball around the age of 4.


Q: How do you see the MLB postseason going? Who wins over who?
A: I think the Houston Astros beat the LA Dodgers in the World Series.


Q: Name something most people don't know about you.
A: I have two younger brothers, Jude and Rohan, that have the ability to achieve more than I have at Bishop Miege in the future.