v Faces in KS: Blake Sullivan - Sports in Kansas 
Warning: include(../includes/bodytag.php): failed to open stream: No such file or directory in /home/kansass/public_html/ks/news/index.php on line 36

Blake Sullivan led Goddard to a 5A runner-up finish in 2016. (Photo: Derek Livingston) 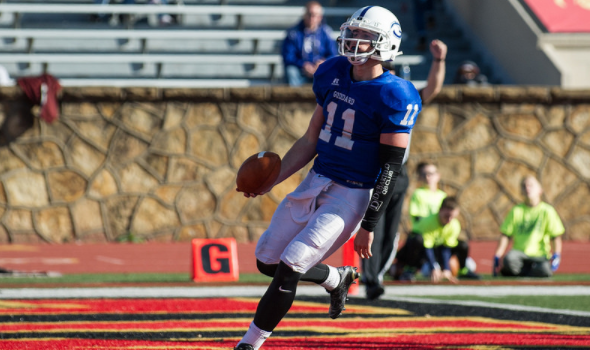 Goddard High quarterback Blake Sullivan, a 6-foot-0, 180-pound, senior, is one of the top returning signal callers in Kansas for the 2017 season. If you want to know why we think that just look at his body of work over the 2016 season.

As a junior last fall he helped the Lions to a 5A state runner-up finish, losing in double OT to Mill Valley. Sullivan, who gets it done with his arm and legs, had over 1,400 rushing and threw for over 1,600 more last season with 45 combined touchdowns. Sullivan is currently in his third year as the starting QB for Goddard, not something you see everyday in big class football is a third year starting QB. Sullivan plans to play collegiate football and has offers from both the Division II and NAIA levels currently but wants to get to the highest level he can to play in football.

Last season was magical, not only for Sullivan but for Goddard High School as it marked the first time in 28 years that the Lions had played for a state title, getting second in 1988 and 2016. Goddard has had some recent struggles, including seven losing seasons in a row from 2008-to-2014, but that has changed recently with Sullivan and head coach Scott Vang, who is in his seventh year as the head man. Goddard is 18-6 with Sullivan as the quarterback after week one of his senior season. They were 9-20 in the three previous seasons without him as the QB. Some of the struggles could have to do with two high schools operating in the area with the addition of Eisenhower after the split a few years back. Imagine one high school that had some success branching into two and then becoming your rival, including a semifinal run by Eisenhower back in 2015. Lawrence High can relate on a much different level with Free State in the nineties as Lawrence, who has the most football wins in Kansas history, hasn't had a state title (1995) since the two split, but now both have been quality programs for years in the Lawrence area. Goddard, who finished 11-2 in last years campaign, has never won a state football title and is 12-15 all-time in the KSHSAA state playoffs in the modern playoff era (1969-present).

This season, the Lions are hungry again with Sullivan and several key play makers back from a year ago. They return A.J. Vang, an all-state offensive lineman, from last year as well as all-state defensive back Ian McSwain. Five starters return on offense while four starters are back on defense. Goddard lost a lot of key play makers from last year but a lot of numbers have been out to help build depth in the program to replace key players like all-state running back Kody Gonzalez who graduated this past May.

The Lions are currently 1-0 and have defending 6A state champion Derby this week at home. Goddard will have their hands full with a power like Derby who has won three of the last four titles in 6A football and has been the best overall team in Kansas over the last five football seasons. Goddard opened up week one of action with an impressive 49-20 victory over 6A Olathe Northwest last week in Olathe. Friday's contest with Derby is one of the highlighted matchups in the state for week two and is the home opener for Goddard. We think Goddard has an opportunity to be a 5A contender once again as we caught up with the outstanding senior quarterback Sullivan below in the latest Faces in Kansas feature.

This feature is presented by Seal Pro, Inc., proudly supporting the Goddard Lions over the 2017 football season. To visit them online click here

Being on the sideline, while my dad was coaching, made me just want to play.

Football, and I plan on playing at the highest level as possible .

How special was that run to the title game last fall?

Very special, only some people can feel what a State Championship game is like. I will never forget it.

Can you guys make a deep run in 5A this year?

Definitely, we have a lot of players/tools that we can use again.

I get along with everybody, lead by example, and a general on the field. I am a dual threat QB.

What is it like to play for Coach Vang and the Goddard staff?

Awesome, they are very relaxing coaches, give us a lot of leeway as long as we are performing on the field and in the classroom.  They know when to be serious and when to be relaxed.

Who will be teams to watch this season on 5A west and in your league?

Definitely Carroll and Heights, maybe Kapaun. Eisenhower in our league.

What are your plans at the next level, seeing any recruiting interest?

Planning on playing football at the highest level, so far Benedictine and Missouri Western have offered. A couple D2’s and D1 double A have shown interest.

Went to 13 camps this summer, pushed myself in the weight room, and worked with my QB coach.

Best place to eat in Goddard?

McDonalds, the time goes there all the time to eat after practice.

I see myself in the business world, I’d like to major in Business Marketing, maybe try to minor in Education so I could be able to coach one day.

Marketing, Mr. Zimmer (marketing teacher) makes it fun. We plan all the themes for the football games and he gives us real world problems that we have to solve from a marketing standpoint.