v David McFarland of TMP sets state record in opener - Sports in Kansas 
Warning: include(../includes/bodytag.php): failed to open stream: No such file or directory in /home/kansass/public_html/ks/news/index.php on line 36 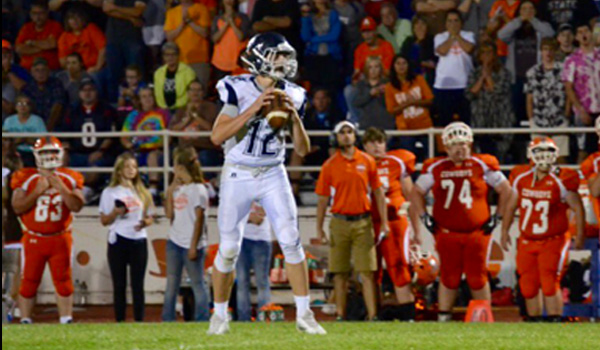 Thomas More Prep quarterback David McFarland's name was all over the place on twitter Friday night. That is because the Monarch senior set the Kansas Sports Hall of Fame single game passing record for yards in a game with 648 yards, pending verification by Jordan Poland of the KSHOF. The previous record of 627 passing yards in a game was held by Zach Howell of Sunrise Christian Academy (Bel Aire, KS) in a 2011 contest against St. Mary's.

TMP has had just 23 wins in the last 13 seasons, according to Kansas Pregame publisher John Baetz, but with seven starters back this could be the year they turn the corner with second-year head coach Jason Cauley.

TMP and McFarland, who play in the loaded Mid-Continent League and 3A, will be back in action this Friday as they travel to Ellis. Ellis (1-0) won 18-12 over Syracuse in their opener.