v Faces in KS: Carlos Emanuel - Sports in Kansas 
Warning: include(../includes/bodytag.php): failed to open stream: No such file or directory in /home/kansass/public_html/ks/news/index.php on line 36

Carlos Emanuel of Hanover may play 8-man but it doesnt stop him from being one of KS best. 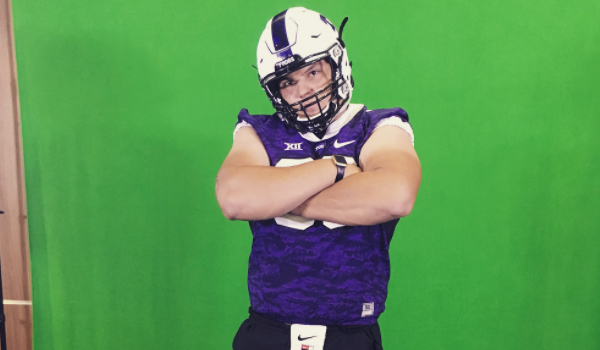 Hanover is located in Washington County in the northeast part of the state with a population of just 682. It is known for its high school sports, whether it be basketball, track, football, you name it. There are always athletes in Hanover and it seems you see the same last names on every single team every year. It's one of those towns that makes small town sports so special in the state of Kansas.

In football the Wildcats have captured four state titles (1979, 2008, 2009, 2016) and have three runner-up finishes (2007, 2014, 2015). They are the defending state champion in 8M-II. This season not only are they known for their past success, they feature one of the strongest players, if not the strongest player in KS, in senior lineman Carlos Emanuel.

Emanuel, a 6-foot-4, 315-pound, class of 2018 recruit, was an all-state selection on the defensive line for the Wildcats one year ago. He registered over 100 tackles from his defensive line spot and is the only returning lineman on both sides of the ball for the Wildcats. He is starting to gain some hype in the recruiting game due to the fact of how strong and big he is. Emanuel has a bench press of 455 pounds, yes you read that right. We recently published a video on our twitter feed @sportsinkansas of Emanuel doing one-rep of it in his high school weight room. Last year as a junior, he also repped out 225 pounds 19 times at the Sharp Performance Combine in Salina. We watched and posted hudl video to spark interest on our social networks of Emanuel last winter and were impressed with his size, but seeing him perform in the combine in person a few months later allowed us to know this kid had a shot at the next level. There are several division one lineman that are just now around that as juniors or seniors in college. So how does a guy not from a big school become one of the strongest in the state? Any roster in Kansas this season would die to have the size and strength that Emanuel has. Skimming across roster/lists, as we do every summer to break down our players to watch lists, there is nobody that compares to the upper body strength that he has currently in high school that we are aware of.

"It doesn't matter where you come from, if you work hardand put in the time you have the ability to be better or just as good as anyone." Emanuel said.

Hanover, led by head coach Matt Heuer, went 12-0 last season on their way to the 8M-II crown. It was their first state title in seven years after taking second in 8M-I in 2014 and 2015. Gone is all-state record breaking quarterback Will Bruna but Emanuel feels like the pieces are back to return to where they were last year.

"It's tradition. I think we can make a run. We are hit by graduation and injuries just like everyone else but our coaches make sure everyone is prepared to step up and hop in the game at any time." Emanuel said.

There is still a lot of work for Emanuel to do as he could be a project for a FBS program at the next level to get him to where he needs to be. Emanuel could prlay at either offensive line or defensive line at the next level. He has yet to recieve an FBS or FCS offer but he is seeing heavy interest. Like many Kansans, Emanuel is one of the under the radar guys and could blow up this season with a breakout year. We certainly know he has the size and strength. Could the knock be because of 8-man competition, technique or his speed? We don't know but we think Emanuel is a hidden gem in the northeast part our of state.

Emanuel has also been working on getting better this off-season with Blaize Foltz of Sharp Performance, a former All Mountain West & Big 12 player at TCU, that is a 2008 alum of Rose Hill HS outside of Wichita. Foltz nearly benched 600 lbs while in college and was named one of the biggest freaks in college football by a publication heading into his senior season. If we had a freaks of high school football in Kansas, Emmanuel would be near the top. Foltz was also picked up as a free agent for a brief stint with the Saints after TCU.

"The kid is tough as stone and no matter how many peopole you throw at hime he will take them on.Everyone knows about his upper body strength and it's got him attention. He has worked a lot this summer and I have taught him techniques to use. He has learned how to use his hands and to explode through people. Carlos is a leader. People gravitate towards his personality and then flips the switch as soon as it's time to get to work." Foltz said.

Hanover opens the 2017 campaign at home with Lebo on Friday September 1st. Last season the Wildcats beat the Wolves 22-0. Lebo, also an 8M-II program, was 7-3 in 2016. We caught up with the rising prospect below in the latest Faces in KS feature.

This feature is presented by Derek Bruna, CPA of Washington County Tax & Accounting, proud to support Carlos Emanuel and the Hanover Wildcats over the 2017 football season. Take state!

I got involved with football starting in 1st grade playing flag football, and then really fell in love with the game when I played tackle football in 5th and 6th grade.

As of now Besides football I throw shot put and discus, but have played basketball and baseball.

What do you plan on doing at the next level, how tough is the recruiting process from small town Kansas?

I plan on playing whatever position that could benefit the team as much as possible. Bring from the small town of Hanover and getting looked at by these big time D1 programs is awesome, proving that there is talent in little schools also.

What makes Hanover such a sports town?

In Hanover no matter what season it is, Football, Volleyball, or basketball the community is behind us 100%. I think we succeed as much as we do so we don't let our community down, because they don't let us down one bit when it comes to supporting us.

Can you guys make another deep run?

I absolutely think we can make another deep run it's tradition. Being hit by graduation or injuries, whatever the case, our coaches do the best job to make sure everyone is prepared to hop in the game at anytime.

What position do you plan on playing at the next level?

I plan on playing whatever position I can to help the team most. Offensive or Defensive line.

How has the weight room changed your game?

The weight room has really changed my game by overall just making me stronger. We have an intense off-season workouts and our coaches expect us to work hard to be better and stronger than last year. One thing that really sticks out in my mind is when Coach Heuer really puts emphasis on hip flexibility, because no matter what sport you're playing any athletic stance starts with bending and constantly using your hips.

My role model has probably got to be my grandma, because she is the most loving caring person of all time and will do anything for anyone, and I appreciate everything she has done for me. I love you Grandma.

What is it like being perhaps the strongest player in the state but from one of the smallest towns in the state?

I think it's really cool being as strong as I am to show everyone it doesn't matter where you come from if you work hard and put in the time you can be just as good or better than anyone.

I think it's hard playing for my coach, but hard in a good way. He expects so much of us and expects us to go our absolute hardest in every lift and drill, not because he wants us to be miserable and tired all the time, but because he wants us to succeed in everything we do. So overall I love playing for Coach Heuer, because I know he will get the best out of me and everyone on the team.

Who are some key players coming back or to watch for?

Some big key guys for us coming back are, Kevin Diederich a senior that's been seeing a lot of field time since he was a sophomore so he will make a big time impact in the back field along with Junior Carter Bruna. Another major key player is junior Daiken Staullbaumer our QB who started WR in the state game his freshman year and started WR sophomore year. He has a lot of experience with playing time so it will be fun to watch what he does with handling our offense. Another huge part of the game is our guys on the sideline cheering loud for us and keeping up the momentum, they take hits all week but might not see the field, but they are just as big of an impact on the team as anyone else just don't get as noticed.

This summer I attended our summer weights programs and traveled all around to camps including: Kstate, TCU, KU, Wyoming, and Colorado State.

Best place to eat in Hanover or around there?

I see myself doing something in business or something with my college major.

My favorite subject in school has definitely gotta be my weights class, if that counts.

Something the average person doesn’t know about Carlos?

One thing that the average person doesn't know about me is that I practice dance moves in my living room on YouTube when no one is home.