v Faces in KS: Cody McNerney - Sports in Kansas 
Warning: include(../includes/bodytag.php): failed to open stream: No such file or directory in /home/kansass/public_html/ks/news/index.php on line 36

Cody McNerney of Collegiate is one of best multi-sport athletes in Kansas. (photo: Lifetouch) 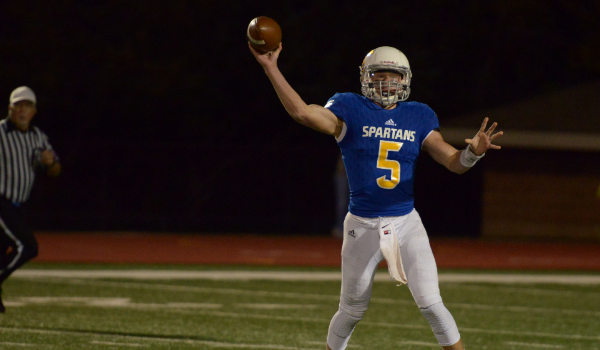 When it comes to 4A-II multiple sport athletes in the state, the name Cody McNerney of Wichita Collegiate comes up a lot. It comes up because McNerney is one of the top returning football and basketball players in the classification heading into the 2017-2018 school year.

McNerney, a 6-foot-1, 205-pound, quarterback and defensive back, is primed for a big year for the Collegiate football team. McNerney is a true dual threat with nice size, speed and a great arm in the spread offense of WCS.  In basketball, he helped his team to a top four finish at state last year and was named first team All 4A-II. He plays much bigger than his 6-foot-1 frame and has been a mainstay for the Spartans since he got in high school on the hardwood. He helped lead the Spartans to the 2016 4A-II title as a sophomore. McNerney should be one of the premier quarterbacks to watch in all of Kansas this season.

Last season as a junior, he passed for over 2,200 yards with 25 touchdowns to go along with 600 more on the ground. Collegiate also returns lineman Mac Copeland, a KU commit, that will be relied upon heavily to lead both offensive and defensive lines in 2017. In basketball, McNerney averaged 18.2 points per game last season for the Spartans, a consistent power whether they are in 4A-II or 3A.

McNerney may be more known for basketball so far in his career with honors and a state title and its definitely something he comes from. His dad, Jim McNerney, was a guard for Ralph Miller teams in the 1950’s at Wichita State, then called University of Wichita.

McNerney’s best bet at the next level, because of size, is more than likely football. It’s also something he says he wants to do at the next level. He is very underrated when it comes to the recruiting game and definitely has some measurables that should project him as a football recruit at the next level. He has a 36-inch vertical and you can easily tell that if you’ve ever seen him dunk in a basketball game. He also features speed in the 4.55-4.6 range in the forty yard dash and has a bench of 285 pounds.

McNerney feels that this years Collegiate team has what it takes to get deep into the 4A-II playoffs and make a run. Last season the Spartans finished 7-4 and lost to Holcomb in the 4A-II playoffs, 44-29. Their other three losses were to a ranked 3A opponent in Hoisington, Mulvane, and 4A-I power Andale.

McNerney and Collegiate, led by 21st year head coach Mike Gehrer, will open the 2017 season on the road against Rose Hill. Last season WCS knocked off the Rockets 41-6 to open the year. The Spartans return just four starters on offense and three on defense. Collegiate will be looking for their 15th straight strip to the KSHSAA playoffs.

We caught up with the outstanding senior below in the latest Q&A edition of Faces in KS.

I got in involved with athletics because of my dad and I enjoyed running around when I was a little kid.

My favorite sport is Football and I’m hoping to continue playing football at the next level.

What makes WCS such a special place to play and go to school at?

WCS is special to play and go to school because of the family atmosphere. Everyone cares for one another and their well-being making the entire school a true family.

Yes we can make a deep run in 4A-II this year. We have a lot of speed on our team and we have must of our offensive line back.

As a teammate and Quarterback I am very calm and composed and am willing to do anything to help my teammates succeed. I want to put my teammates in a position to where they can be their best. I am a Dual-Threat Quarterback.

What is it like to play for the coaches at WCS?

The coaches at WCS are very good. They really care about bettering us as players and as men. They are completely bought into our team and putting all of us in positions for us to succeed.

Being a multiple sport guy has really helped me out with many things such my quickness, lateral movement and reaction.

I threw several times a week with some our Skill guys and I trained with a trainer multiple times a week working on speed, quickness, lateral movement, QB skills and DB skills.

Best place to eat in Wichita?

I see myself in 10 years with a good job and hopefully a family.

I am a big fan of Star Wars.