v Faces in KS: Jaylen Pickle - Sports in Kansas 
Warning: include(../includes/bodytag.php): failed to open stream: No such file or directory in /home/kansass/public_html/ks/news/index.php on line 36

Jaylen Pickle is looking for an all-state season in 3A for 2017. (photo: Chet Kuplen) 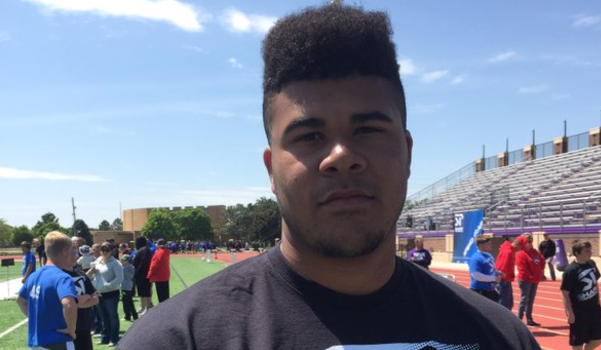 Bill Snyder and the coaching staff at Kansas State have been known to recruit a lot of in-state talent and that has seemed to be pivotal through the Snyder era. The pipeline through the sunflower state will continue going into the class of 2018. Jaylen Pickle, a 6-foot-5 280 pound defensive lineman and tight end turned fullback from 3A Cimarron became the first commit for the Wildcats’ 2018 class.

Pickle announced his commitment via Twitter on May 6. Pickle also had offers from South Dakota, Southern Illinois, University of Central Florida and Western Illinois. Kansas State has certainly had some success from the small town of Cimarron, population of roughly 2,100, which is located in between Garden City and Dodge City in Western Kansas. In 2006 Ian Campbell (2004 alum) earned Big 12 Defensive Player of the Year and started three years for the Wildcats. In 2017 this years Cimarron grad Nick Ast will also walk onto the team as a preferred walk-on.

Cimarron went 7-3 last year and lost in the first round of the playoffs to Larned, 35-30 to end their season. The Bluejays will have high expectations going into the upcoming season under new head coach Greg Koenig. Koenig was an extremely successful coach at 3A power Beloit, where he went 93-30 as the Trojans’ head coach. Pickle is excited about the encouragement that Koenig has already brought to the team this summer.

Pickle had played on the defensive line and was a tight end on the offensive side of the ball, but will be the Bluejays’ fullback come August. Pickle is planning on dropping 20-30 pounds and get around the 250-260 range, because of his transition to fullback.

Pickle has always been around the game of football and began playing at a young age. His uncle used to coach the Bluejays when Jaylen was younger, so he would always be at the games and would catch onto the game early on. Pickle spends a lot of time outside of practice studying the play of some of the top college and professional players and learning their tendencies and other things that he can be working on to improve his own game.

Jaylen is spending a lot of time in the weight room this summer to get primed for a hopeful successful senior season. He’s attended the K-State camp this summer and will be wearing the purple and silver next fall.

Pickle was also a big part of the Bluejays’ basketball success, averaging nearly a double-double every night out. He says that he can dunk with ease and is a big threat down low for opponents.

Q: Your Twitter bio says Elgin, Illinois. Are you from there originally? If so, what brought you to Cimarron, KS of all places?
A: I was born in Elgin which is right outside of Chicago and my mom and I moved back to Cimarron when I was little because she grew up here and most of her side of the family lives here.

Q: When did you make the move to Cimarron? How do you like it?

A: I was probably 2. It's alright but I like the city a lot better, small towns have their perks but I would rather be in a big city. But I will say being in a small town is more fun when playing sports because everyone in the town knows you, but that can also be a bad thing.

Q: You're one of the top defensive linemen in the state going into the upcoming season, how does that feel?

A: I mean that's cool and all being one of the top but I want to be THE top in the state.

Q: You've recently committed to K-State, what made you choose to be a Wildcat?

A: It's a great place and the coaches are top notch, I grew up a wildcat and all my close friends are wildcat fans so there's no better place to be for them and the rest of the state to cheer you on.

Q: Many have said you were recruited "under the radar" what do you think about that?

A: I think I was, I know I can compete with the top in the nation, but time didn't allow for me to do that since I work every day of the summer and I'm so busy I only have time to go to a few camps and combines.

Q: What position do you figure you will play at K-State?

Q: Cimarron went 7-3 last year and lost in the first round of the playoffs in a close game... What will it take to make it farther in this year's playoffs?

Q: You've got a new coach in coach Koenig, how do you like him so far?
A: I like him. I've only been in the weight room with him and he is very encouraging.

Q: At what age did you begin playing football?
A: I played football my whole life, I didn't start playing organized ball until probably 3rd grade, but I've always been around it, my uncle used to coach in Cimarron when I was growing up so I was always around the game.

Q: Have you always been a lineman?

A: Yeah for the most part on defense. I played linebacker in different situations my freshman year.

Q: What is your current height and weight? Are you happy with where you're at now?
A: 6'5" 280lbs. I'm satisfied right now especially being able to move the way I can at this weight. I mean I can still run a 4.9 and easily dunk a basketball. But I do plan on getting down to 250 or 260 before season because I'll be playing fullback.

Q: What camps/combines have you done this summer?
A: Just a KSU camp

Q: What're your expectations for this years team?
A: I think we have a chance to go deeper in the playoffs this year. I expect us to. And beat Meade of course.

A: I study a lot of college and pros that play my position but I don't really model my game. I do me and learn from others, maybe different hand and feet combos but I like to play aggressive and also agile, with of course some swag too.

Q: Favorite NFL player? Team?
A: My favorite player is Randy Moss and my favorite team is the Bears.

Q: Who are some other players to watch on this Bluejay team?
A: Josh Seabolt, he's easily in the top 2 linebackers in the state, I think he's probably the best in the state right now, he's very underrated.

Q: Do you have any pregame routines?
A: I pray before the game but that's about it, I like to let the game and pre game flow together so I get the feel of the atmosphere and what the game is going to be like.

Q: What's something most people don't know about you?
A: I like to go fishing. I don't get to often but I love it.

A: Honestly I want to make it to the NFL. I've got the opportunity and I don't want to waste it. I'll be going up against easily the best OL in the BIG 12 so it'll be hard not to get better every single day and I've been counted out a lot. A lot of people bet against me, didn't think I would make it to where I am today and that fuels me. I work hard everyday and I like when the odds are against me because it makes succeeding 100 times better. It would also be cool coming back home and knowing I made it from where I came from.