v Faces in KS: Levi Archer - Sports in Kansas 
Warning: include(../includes/bodytag.php): failed to open stream: No such file or directory in /home/kansass/public_html/ks/news/index.php on line 36

Levi Archer of Goodland will look to be one of the top returning QBs in Kansas for 2017. 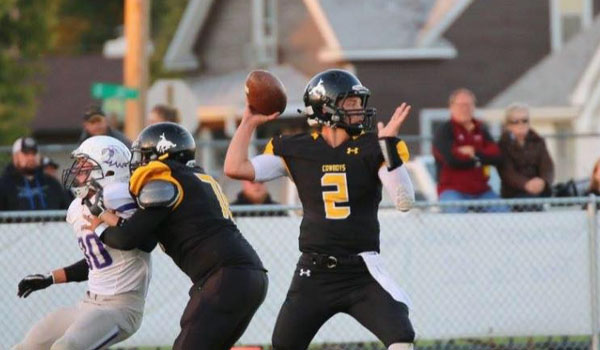 You’ll have to go way out west to find one of the top prospects in the entire state for the class of 2018. Located at the intersection of I-70 and K-27 in the northwest part of the state lies the town of Goodland, which is just 17 miles from the Colorado border. Levi Archer, a senior for the Cowboys is projected to be one of the top quarterbacks in the state going into the upcoming fall season.

The Cowboys believe they have a chance to make some noise this year under new coach, Chase Topliff. Topliff took over for Jeff Savage after serving as an assistant a year ago. The Cowboys have finished 3-6 in each of the past two seasons and four out of the past five years, so Topliff is hoping for a turnaround. The seniors on this year’s team have been around Topliff since 7th grade and they’re excited to have him in charge this season.

Archer will be busy this summer spending time in the weight room, on the football field and attending camps across the state and into Missouri. Archer plans on attending camps at KU, K-State, Missouri Western, Ft. Hays State and Butler this summer. Archer may or may not be division one bound, but the Cowboys have certainly had division one talent over the years in their small community of just 4,400. It's just been a while since names like the late Brook Berringer (Nebraska), Tinker Keck (Cincinatti), Jordan Bedore (K-State) or Mark Starr (Colorado State) have walked through the hallways at Goodland.

Archer describes himself as a dual-threat quarterback and uses his size in his favor. Archer says his 6-foot-4 height is a big advantage to see over the line and read the defense better. Archer is sitting just below 200 pounds right now, but would like to get up to 205 before the season is over in the fall.

Archer does it all, whether it be with his arm or legs, he’s tough to bring down, especially when he’s running a 4.6 40-yard dash. He’s currently working on getting faster and releasing the ball cleaner when throwing.

The quarterback has played behind center ever since he began playing tackle football back in fourth grade and loves it. The only time Archer switched to a different offensive position was his freshman year when he was moved out to wide receiver. Archer is much more comfortable with the ball and being able to control the offense.

When Archer started at quarterback his sophomore year he completed 177-325 passes for 2,150 yards and 16 touchdowns. He also rushed for 230 yards and five touchdowns during that campaign.

This feature is presented by the Goodland G Club, proud supporters of Goodland Cowboy Football.

Q: Your team went just 3-6 last year, but those six losses were to some really good teams.. what did you and the team learn from those losses?

A: We've learned a lot over the years about how much work it takes to be successful with a schedule like ours. A lot of little things have been changed from last year and we're all working harder than we ever have to make sure we make some noise this year and I know we will.

Q: What are your expectations for the upcoming season?

A: I and a lot of other people all have high expectations for this year. With a few guys we didn't have last year due to injuries coming back and how hard our team is working this summer I'm expecting us to go deep into the playoffs. Also we have Coach Topliff who we've been close with since Jr high football as our head coach and we're really excited about him.

Q: Have you been attending camps or combines this summer thus far?

A: The combines I've been to are Rivals three stripe camp in St. Louis and Sharp preformance in Salina. The only camp I've been to is Wyoming, but am attending Ku, Kstate, Missouri western, Butler, and Fort Hays later in the summer.

Q: How would you describe your play?

A: I'm a dual threat quarterback, I like to extend plays with my legs and do what it takes to get first downs.

Q: Do you model your game after any QB in particular?

A: I don't really model my game after anyone, I just like to go out and do me and not worry about all the little things.

Q: Who are some other guys to watch on the Cowboys roster this year?

A: I can't single out any guys, we have way too much talent this year in all classes to do that. We just want to show the state what we really are about this next year.

Q: You're 6'4" and 195 pounds, how do you feel about your size right now? How do you use your height as an advantage?

A: I'm pretty confident with the size I am at right now, but I would like to be about 205 pounds before football is over. Being a taller quarterback it's easier to read the field and see over the line.

Q: You're one of the top QB in the state this season, what are you working on in particular to improve your game?

A: I'm always working on something to improve my game. Right now I'm working on my speed a lot more, and getting rid of the ball cleaner and faster in our quick game.

Q: Do you currently have any offers? Visits scheduled?

A: I have no official offers but have interest from many schools in Wyoming, Kansas, South Dakota, North Dakota, Nebraska, Illinois, and Missouri. Getting my name out there like I should've been earlier and I'm excited to see where it goes

A: I've been doing a lot of workouts that build speed but I'm sure it's some genetics also.

A: I have to eat sour patch kids, drink a lot of water, and listen to a lot of music. That's really it.

Q: What's it like being the leader of the offense?

A: It's a lot of pressure but I embrace it and look forward to every Friday under the lights.

A: 4th grade was the first year we all played tackle football for the first time, and I have played QB my whole life.

Q: Have you started all three years at QB?

A: I've started my sophomore and junior year at quarterback, Freshman year I played a little WR because we already had a varsity quarterback, it was pretty fun but I love quarterback.

A: We've been with coach Topliff since 7th grade and we are really excited about finally having him as a head coach. We all respect him a ton and are going to buy in and work hard day in and day out for him.

Q: Have you always lived in Goodland? What's it like there?

A: I have always lived in Goodland, it's a pretty special place to me and I love it here. My whole family played sports here and there is a lot of tradition in this town. There have been good and bad experiences but I wouldn't trade the relationships I've built here for anything.

Q: What's one thing most people wouldn't know about you?

A: That I can play the piano pretty well.

A: My favorite NFL player is Aaron Rodgers. I like how he competes and he's fun to watch. I don't really have a favorite but if I had to pick, it would be the Broncos.

Q: What do you plan on majoring in in college?

A: My dream job obviously would be to make it to the NFL one day. If not that, I'd like to be a nutritionist for a NFL or college team.