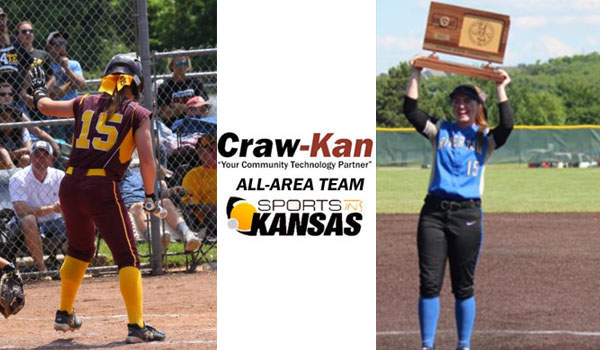 Compton is the all-time strikeouts leader in the history of Kansas high school softball and all-time wins leader. She led the Rams to an undefeated record and finished as one of the top pitchers of all-time in Kansas history. Compton, a Pittsburg State signee, finished with 80 wins and 886 strikeouts in her four-year career as a Lady Ram. She is a repeat selection as the Pitcher of the Year. Compton doesn’t only get the nod as a pitcher of the year, she also got it done with her bat as she hit for a .430 AVG in her career and had over 100 hits in four years. She is perhaps the most dominant player we have ever seen in the circle over a four year period of high school softball in our area.

Infielder of the Year

Murphy, a junior shortstop, hit .615 for the Lady Trojans in 2017 including hitting over .700 in her last 15 games of the season. Her .615 average was near the tops in Kansas at any level. She was a defensive staple as a middle infielder for the 4A-II champ this season. She is a repeat selection on the All-Area team, making it as a sophomore last spring. Murphy was also a member of the state champion basketball team this March.

Outfielder of the Year

Crain, a junior center fielder, is one of the best multiple sport athletes in 4A, making all-state in three different sports as a junior in 2016-2017 and that didn’t stop on this year’s softball team. She hit .506 for the Trojans at the plate this season, leading them in runs scored with 42. Crain, a five-tool player, patrolled center as one of the top defensive players in the state for the Trojans in 2017 and was a first team All 4A-II selection this season. She was also a first team 4A-II selection in basketball over the last two seasons and helped the Trojans to the 4A-II title in basketball this March.

Hitter of the Year

Harper, a senior who plays first base, was a hitting machine for the Raiders over her four-year career, tallying 23 home runs, including 18 combined over the last two seasons. She hit .560 as a senior in 2017. The Raiders wouldn’t repeat in 4A-II this season, but Harper was the top power hitter in the area for the second consecutive year.

Co-Coaches of the Year

Mitchell led the Lady Rams to a perfect season at 26-0 by capturing the 3A state title for the second consecutive year. Mitchell has four state titles as a coach and it’s the second time he has won two consecutive. What’s most impressive is that Mitchell went undefeated through the brutal CNC league which has won four state titles over the last two years in Kansas high school girls softball with three schools bringing home the hardware (Frontenac – 2016, Riverton – 2016, 2017, Girard – 2017).

Vinze led the Trojans to their first ever state softball title by capturing the 4A-II crown in Emporia in late May. The Trojans also added a state basketball title this March, giving them their only two team titles in the history of their school, boys or girls. Girard only graduates one senior on its squad, so look for a bright future of the Trojans going forward.