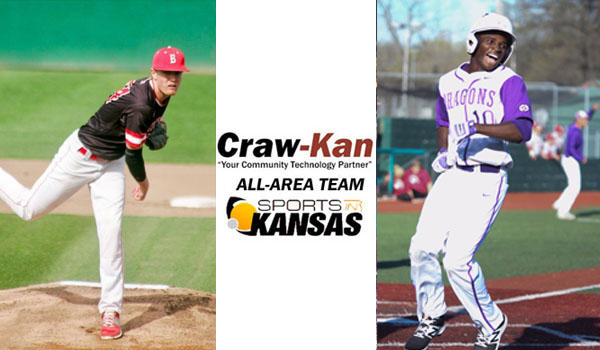 Harris was a rare four-time first team All-SEK honoree in baseball. But not only that, he has earned some type of recognition in every sport (football, baseball, basketball) that he has played on the all-area or all-league level over his career. The senior leadoff man is a speedster that featured a .452 batting average, which ranked among the leaders in 5A. Not only was he one of the best offensive players in the area and 5A this season, he was also one of the best defensive players patrolling center field for the Dragons over the last several years. The Dragons finished as 5A regional runner-up, losing in extra innings from a berth at state and had a 16-5 (10-2 SEK) record this season.

Dotson is a repeat choice as Pitcher of the Year and helped lead his Lions to a second-place finish in 2017 after winning the state title in 2016. Dotson was 27-3 in his career for the Lions, including a 7-2 record in 2017, losing to 2-1A power Colgan and an Oklahoma state qualifier. The Pittsburg State signee was undefeated over his sophomore and junior seasons and was 4-0 in regional championship games on the mound. He was also undefeated in state tournament play over the four years his team went to state.

Dainty led the Lancers to a fourth-place finish in 3A this season in their first ever state tournament appearance in school history. The Lancers finished the season with a 14-9 record in arguably the state’s top baseball league (CNC) at the 4A-II below level. This season was extra special for Dainty who is an alum of the school, graduating in 2005 where he was an all-state baseball player.

Selection process is handled entirely by Sports in Kansas with additional input from local media and coaches. Special thanks to Mike Snow & Trent Kling of My Town Media for help in compiling these lists and to several area coaches for providing us with info and stats on their players all season long. Also special thanks to Matt Newbery (Crawford County Sports Feed) and Scott Nuzum (Fort Scott Tribune) for providing us with CNC and SEK league standings all season.