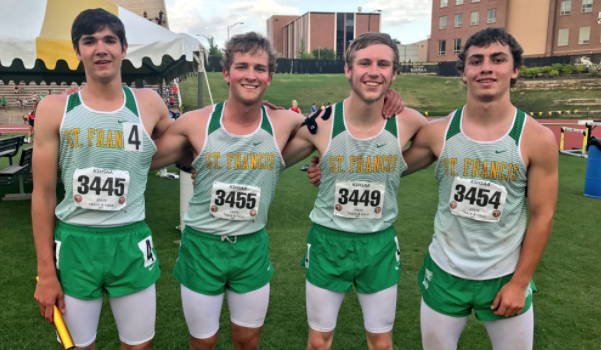 The 1A Saint Francis boys captured the 4x100 title and 4x400 title with the same exact team members in Wichita on Saturday May 27th at Cessna Stadium. The team of Tate Busse, Taylor Rogers, Wyatt Hackler and Jordan Raby picked up the two relay titles in 2017 with very impressive outings all season long. It's not uncommon to have the same relay team members on both across the state but it is very rare to have the same exact team pick up two titles at the same meet at the state level. Their 4x100 had a time of 43.96, while their 4x400 had a time of 3:25.71. The 4x400 team was among the best in Kansas at any classification despite being one of the smallest schools in Kansas, ranking 11th overall over the six Kansas classifications. The majority of those schools ranked ahead of them include mostly all 5A and 6A schools in Kansas with well over 700 students in 5A and some 6A over 1,500 high school students, where St. Francis has less than 100 kids in its high school in Western Kansas. Busse, an all-state selection this season in basketball, showed his range this season from 100 to 800 as he was also a part of the third place 4x800 relay team in 1A.

Nex-Tech Wireless would like to congratulate the two relay squads and their four team members on an oustanding season in 1A Track and Field.