v SE-Cherokee ready for first ever state baseball tourney - Sports in Kansas 
Warning: include(../includes/bodytag.php): failed to open stream: No such file or directory in /home/kansass/public_html/ks/news/index.php on line 36 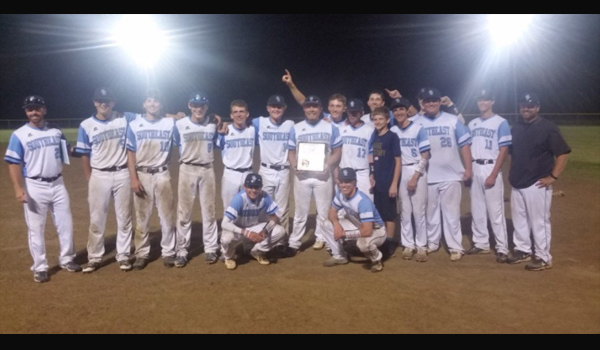 For the first time in program history the Southeast Lancers, located in Cherokee, Kansas on the Crawford County line in Southeast Kansas, are headed to state for baseball as they punched their ticket to the 3A state tournament in Manhattan.

"It's an exciting time. It's quite the achievement. All of the community, players and parents are very excited." Lancer head coach David Dainty said.

The Lancers, who play in the loaded CNC league that has produced five different state champions and 20 state titles in baseball since the year 2001, hasn't always provided the best opportunities for Southeast to get into the state tournament even though they've had the teams that have competed with previous state champions. The Lancers have been close in the past, falling in regional title games, but very difficult to do so with the likes of CNC 3A teams in the past in their regionals (Baxter Springs 2002, 2003, 2006, 2007 3A State Champs, Galena  2010 3A State Champs, Frontenac 2012 3A State Champs, Colgan 2013 3A state champs, Riverton 2015 3A State Champs). If the Lancers were to win the 3A state tournament, a field that also features CNC league member Galena, they would become the sixth different CNC team to win a 3A state baseball title.

"Just getting through opening round games in regionals is sometimes hard when you're playing a team that won state the year before or who went on to win it and we've been pretty close in the past. We've taken teams to extra innings that end up winning state titles in the past. We feel like if we could get through our 3A regional, then we have a pretty good shot at being competitive at state and the CNC record of that in 3A in the past speaks for itself." Dainty said.

The Lancers got through their regional with three wins as they entered as the number three seed. They beat the host Erie in opening round (6-0), Jayhawk Linn (12-1) in the semifinals, before beating Humboldt (10-9) in nine innings in the regional championship game. Seven different SE players had RBI in the contest including Jake Burns and Hunter Jameson, who each had three, then Cole Burdette, Colton Trejo, Brett Malle, Tanner Craddock, and Dylan Wilson all had one a piece. C.J. Peacock was the winning pitcher coming in relief for Burdette, who was the starter for Southeast in the regional title game.

"That game was a dog fight with Humboldt. It truly tested our character. We got up early 7-1 and they came back. We just took it pitch to pitch from inning to inning. Those kids fought on both teams." Dainty said.

The sixth seeded Lancers (13-8) will rely on the arms of Burdette, an all-state selection last season, Jameson, and Peacock in the 3A state tournament as they open up play on Thursday against three-seed Eksridge-Mission Valley (19-2)

"Every pitch and every inning matters but most importantly we are worried about playing our type of baseball at the state tournament and not being distracted." Dainty said.

Thursdays opening round game against Mission Valley is scheduled for a 1:15 p.m. start at Tointon Family Stadium on Kansas State University campus in Manhattan. A win would put the Lancers into the 3A semifinals where they would get the winner of Marion or TMP.  To view entire 3A bracket click here. To look at the 3A state tourney preview click here. To hear the audio interview w/ Coach Dainty click here.