v 2017 KS Boys Midseason Track & Field: Who's Impressed? - Sports in Kansas 
Warning: include(../includes/bodytag.php): failed to open stream: No such file or directory in /home/kansass/public_html/ks/news/index.php on line 36

Noah Green of Aquinas is among the best hurdlers in the nation. (photo: Chet Kuplen, Sports in KS) 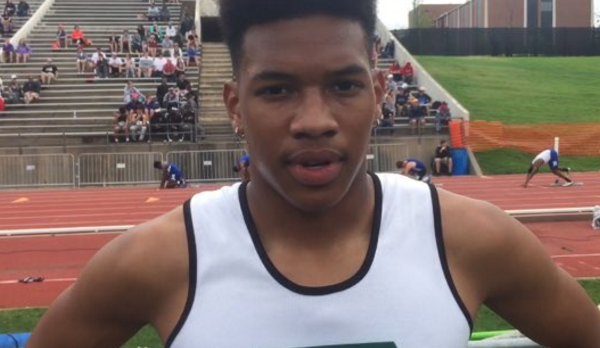 Midseason Boys Report in Kansas. Who has impressed us at the midway point of the 2017 track and field season?

Henson has the second fastest 800-meter time in the state at 1:57.22 this season and was the state runner-up in the event last season. He has also showed his 400-meter speed with a 48 anchor leg on the 4x400 relay this season. He will also contend for a state long jump title and has a season best of 21-06. Along with Henson and Jace Ruder (Hurdles/Discus/4x100), Norton will have a shot to compete for the 3A state title.

Hoffer may be the top overall jumper in Kansas this season. His high jump mark of 6-08 this season is second in Kansas. However, last season at the AAU Nationals he took first with a height of 6-10.75. Hoffer is also the top long jumper in the state with a Kansas best of 23-01.50 this season. He also has a PR of 44-01 in the triple jump.

Johnson, also one of the top football players headed into 2017 season, is one of the top throwers in the state. His mark of 176-02 in the discus this season ranks second in all classes of Kansas and is just outside the national top 50. Johnson also has a shot put mark of over 49-feet that should place at the state outdoor. He will be the favorite to win the 4A discus this season.

Kinser, who stands 6-foot-9 and is known for his dunks in basketball, has put himself on the map of high jump this season. The senior went 6-foot-10 at the Glenn Cunningham Invivational on April 13th to claim the top overall mark in Kansas this season. Kinser took third at state last season with a jump of 6-04. This season he will compete in 3A after being in 4A last season.

Landrum has the fastest 100 and 200 in the state of Kansas this season. His time of 10.55 in the 100 meters was wind aided as well as his 21.67 but both times are FAT. He also beat Kade Remsberg of Newton head-to-head in both races, who was thought to be the fastest returnee in Kansas for the 2017 season. Landrum will look to double up in 6A this season as a junior.

Peters has been impressive since his freshman year at South Gray and is now one of the top overall thowers in Kansas from his 1A high school. His mark of 164-02 in the discus is fourth in all classes of Kansas while his toss of 54-07.50 in shot is third in all classes.

Stiawalt, also an all-state basketball player, is one of the top overall jumpers in Kansas this season. His mark of 45-06.75 is second in all classes of Kansas from his tiny 2A high school. He also has a season best of 6-06 in the high jump, tied for fourth in all classes, but has a PR of 6-07 last season. Expect Stiawalt to add to his state titles this spring, last year he won the HJ, LJ and TJ at the state outdoor.

Swenson registered the top discus mark in Kansas last week with a toss of 198-10 (Top 10 all-time in KS) at the Pitt State Gorilla Relays. Newly converted to the spin in shot, he has the top toss in Kansas this season with a mark of 56-05.25. The Pittsburg State signee is ranked in the top 10 nationally in the discus this season. Both his brother (Kameron, Maize ‘16) and sister (Keiryn, Maize ‘15) have state track and field titles in the javelin, but Konner is still looking for his first state track and field title after taking second in the discus in 2016.

Remsberg, a Air Force football signee, won two state titles in the 100 and 200 in 5A two years ago as a sophomore but hand an injury plagued 2016 campaign as a junior. This season he looks to be getting back to 2015 form and has the second fastest 200 meters in the state at 21.75, being edged by Landrum of Wichita South at the K.T. Woodman Pre-State Challenge last week. Remsberg has a PR of 10.61 in the 100 meters as a sophomore and has ran a 10.83 so far this season. Look for him to possibly double up in 5A once again this season.

Waldo is the defending 6A champion in the 400-meter dash, running a sub 49-second time last season. He is back in that form this season as he opened up his 2017 campaign with a 48.95, which ranks number one in Kansas in all classifications this season.