v 2017 KS Girls Midseason Track & Field: Who's Impressed? - Sports in Kansas 
Warning: include(../includes/bodytag.php): failed to open stream: No such file or directory in /home/kansass/public_html/ks/news/index.php on line 36

Taylor Muff of Pittsburg is one of the best athletes in Kansas. (photo: Chet Kuplen, Sports in KS) 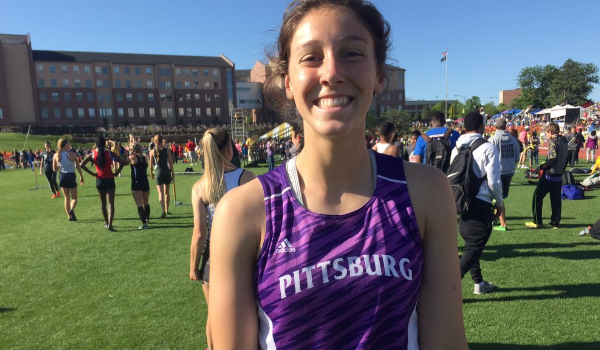 Taking a look at some of the most impressive individuals in Kansas High School girls track and field at the mid-season point of the 2017 season.

Anderson has ran the fastest 100 meter dash time in the state this season with 11.76 at the KT Woodman Pre-State Challenge to take first. It may have been wind-aided but it’s nothing that we didn’t expect to see form someone who ran a 11.86 as a freshman last spring. Anderson also features a sub 25 200-meter dash in which she ran as an 8th grader at the AAU Regionals National Qualifier. She is also part of the 4x100 team of Newton that is the fastest in the state at 48.24. Newton will look to defend its 5A title this season. Teammate Savannah Simmons has also shown she is capable of putting up low 12 and 25 times in the 100 and 200. Maggie Remsberg will also bring some points in for Newton and be capable of competing for a title in the hurdles. Newton is loaded once again in 2017.

Baker has the top mark in Kansas this season in the javelin at 159-04. She is the defending 6A state champion where she won with a throw of 149-01 last season as a sophomore. Two years ago at Baker’s first meet ever throwing javelin in high school, she went 86-02. The mark of 159-04 is third in the United States high school girls this season.

It seems like Bolden has been around forever, even back to her Wichita Collegiate days. She has the top long jump in Kansas this season in all classes at 19-04. She is also the top 100 meter hurdler in Kansas this season and has only lost two races in her entire career in the event, both at the highly regarded Kansas Relays as a freshman and sophomore. Her season best is 14.62 but her all-time best is 14.38 coming last season. Bolden will look to become a four time state champion in the event. Only three Kansas girls have ever done so including Jennifer Gruver of Scott City (1989-1992), Cris Hall of Chanute (1985-1988) and Linsday Eck of St. Johns Beloit (1997-2000)

Hubert, who won two 1A state titles at Clifton-Clyde before transferring to Beloit and winning the 3A title last year in the javelin, is primed to go for her fourth state javelin title this fall. Only two girls have won the state javelin all four years of high school, Lachelle Hartley of Horton (1987-1990) and Dani Plan of Gardner-Edgerton (2010-2013). Hubert has the 1A meet record of 141-06 as a sophomore back in 2015. She has a season best of 148-00 which ranks 11th in the country. The 3A state meet record is 148-01 set by Elizabeth Herrs of Rock Creek back in 2012 before she became an All-American at Oklahoma. Hubert has signed with Wichita State. She also features one of the top shot put marks in the state with a toss just over 40 feet.

Miller is one of the nation’s top discus throwers and has signed with Oklahoma. The 2A product has a season best of 153-09 this year and has thrown over 150 in all three meets so far. Miller is very consistent, winning the last three state discus titles and has only lost one meet in the discus since her sophomore season. She was also a state champ in the shot put last season and has a career PR just over 40 feet. Miller has a all-time PR of 158-00 in the discus which she threw as a junior in 2016.

Muff may be the best three sport athlete in the state this season. The Northern Colorado Volleyball signee was also all-state in basketball the last two seasons. She has four individual state titles in track and field, two each in the 100 hurdles and 300 hurdles. She also has the second best discus mark in Kansas this season. Her all-time PRs in her career are 14.66 in the 100 hurdles, 44.65 in the 300 hurdles and 141-07 in the discus which all came in previous seasons. Muff hasn’t seen last year numbers yet but she does have top 10 times or distances in all classes in the 100 hurdles and discus this season so far. With the relay teams Pittsburg features, McKenzie Wilks in distance, Faith Turner in sprints, and Muff, PHS has a shot at placing very high in 5A this season.

Smarsh has the top 300-meter intermediate hurdle time in the state so far this season with a time of 46.37 at the KT Woodman Pre-State Challenge to take first. Her PR time is 45.95 in which she took second at the state outdoor in 4A 2016. She could also contend to be a high placer in the 100 hurdles (15.41).

Speer goes to one of the smallest high schools in Kansas but is the state’s top shot put thrower at 46-09.50, a mark that would beat the 1A record if thrown at state this season. Speer also has a javelin (133-01) and discus mark (120-09) mark capable of a high place in 1A and is an all-state basketball player. She has signed to throw at Mizzou next season.

Turner has the second fastest 100 time in the state at 11.96. She also has a top 10 time in the 200 (26.05) and a top 10 Long Jump (17-07.50). She also is part of the Pittsburg 4x100 team that ranks in the top 10 in the state in all classes. With these type of performances at state, Turner could add up some points for the Dragons, however 5A has the most loaded field in the sprints. She has seemed to be the most impressive freshman in the entire state of Kansas for track and field in 2017.