v Faces in KS: Jordan Speer - Sports in Kansas 
Warning: include(../includes/bodytag.php): failed to open stream: No such file or directory in /home/kansass/public_html/ks/news/index.php on line 36

Jordan Speer of Dighton is among the nations top throwers and has signed with Mizzou. 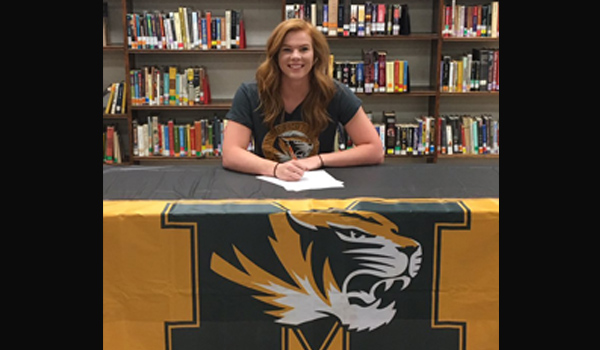 Dighton, Kansas, home of the Hornets, is located about 60 miles northeast of Garden City in Western Kansas and its official population was last listed as 1,023. Not many high school athletes in the state of Kansas get the opportunity to compete in division one athletics, especially ones from 1A high schools with a population of around 1,000 people, that is until you meet Dighton High School senior, Jordan Speer.

Speer is one of the top multiple sport female athletes in the state of Kansas. She signed a national letter of intent on April 12th to compete in the SEC for track and field in the throws at Mizzou. She is a multiple time state champion in the shot put and has been named all-state in basketball in the 1A-I or 1A-II ranks three different occasions. Speer may be known for basketball and her throwing events in Kansas, but nationally she is turning the heads in track and field. Her mark of 46-09.50 this season ranks #1 in all classifications of Kansas. That means high schools with 1,000-2,000 plus kids in Kansas that are 5A/6A have nobody with the mark that Speer, who goes to school with just 69 students in Dighton, has in her tiny 1A high school. Not only is Speer a star in the state of Kansas for the shot put, she also ranks ninth among high school girls shot throwers in the United States so far this season. Speer is also capable of being a top 50 javelin thrower in the nation with her throw of 133-1 last season as a junior. In track and field, tape measures and stop watches dont lie and are the same no matter where they are being used, so ranking and recruiting can become a bit easier for coaches unlike comparisons to a 1A or 6A basketball player/competition level.

"Being from a small town is motivating to me to have the best marks in Kansas. I plan on going for my third state championship this spring in the shot put. My motivation is to improve myself everyday." Speer said.

Being a multiple sport athlete has also helped Speer as a well rounded athlete.  Along with all-state basketball teammate, Sara Cramer, who is also a three-time all-state selection, she helped lead Dighton to a state title in basketball as a junior in 2016.  Cramer and Speer both scored over 1,000 career points at Dighton in the same game this year as seniors. Speer also competes in volleyball.

"I love all sports, but track is by far my favorite thing and it's why I chose to do it in college. Doing all three has help keep me busy and I wouldnt trade it for the world. I feel that playing all three sports helps give me an edge. Every sport works a different set of muscles and makes me a well rounded athlete." Speer said.

For now Speer is concentrating on getting another state shot put championship in track and field. Not only will she have the opportunity to 3-peat as a state champ in the shot put, she will also have an opportunity to break the 1A state meet record. The current record at the 1A state meet is 45-00.25 by Brandi Broaddus of Moscow in 2004. The state javelin record could also be in reach in 1A and is 141-06 by Kourtni Hubert of Clifton Clyde in 2015, who's now a senior at 3A Beloit since transferring two years ago. Speer will also have an opportunity in the discus for a state title. This years 1A state meet is in Wichita on May 26 & 27th at Cessna Stadium where all classes of Kansas compete. We caught up with the outstanding senior below in the latest Q&A edition of Faces in KS.

Be sure to nominate the Western Kansas Athlete of the Month presented by Nex-Tech Wireless by sending nominations to admin@kansas-sports.com on the last seven days of each month.

I grew up constantly being surrounded by sports. My mom played basketball in college at Barton Community College and Friends University. My dad played football at McPherson. My three older siblings were also very involved in athletics throughout their junior high and high school careers. I saw the success that they all had and wanted it for myself, so I started to dedicate my free time to sports.

What is it like to be from a small town and lead the state in the shot put?

It’s exciting, and a huge motivator. I plan on going for my third state championship in shot put this year and beating the state record. I see it all as motivation to improve myself everyday.

What is it like to be a multiple sport athlete, what's your favorite sport?

I love all three, but track is by far my favorite that’s why I chose to do it in college. Doing all three in high school has definitely kept me busy, but I wouldn’t of traded it for the world.

How does being a multiple sport athlete help you out in all sports?

I think being in volleyball, basketball, and track gives me an edge. Every sport works a different set of muscles making me a well-rounded athlete.

How did this year in basketball go?

Although we didn’t get that far in state, we still had a lot of success as a team. We won our early season tournament (Castle Rock Tournament), and were also NWKL Champions. We were Sub-State Champions and going into state our record was 20-2, one of the best records we had at that point in the season.

What is your goal for this years state track and field meet?

What was it like to compete at state track and field?

I love the atmosphere there, it’s extremely competitive yet everyone wants the best for you. I think it can be intimidating, but the pressure always seems to bring out the best.

What was it like to win a state basketball title as a junior?

It was an amazing experience. The community was awesome and super excited for all of us. We made school history by bringing home the first state basketball championship.

Best athlete you have ever went against?

My teammate Sara Cramer is by far the best athlete I’ve ever competed against. In practice, she pushed me to be the athlete I am today. In conditioning, drills, and scrimmages she always gives her all. Seeing her do that made me give my all too, and it trickled down to the rest of the team.

Favorite place to eat in Dighton?

The Dighton Bowl makes the best chicken salads ever.

I am going to the University of Missouri and being on the track and field teams. I want to major in exercise science and upon completing my undergraduate studies I plan on applying to PT school.

I love Art class because it gives me an hour where I get to take a break from book classes.

I see myself working in a clinic, hopefully married, and owning my own house.

I have 5 siblings including two sets of twins in my family. My oldest sibling Hannah is in grad school in Manhattan. The first set of twins, Ben and Leslie, attend Pitt State and Ottawa University. The second set, my little sisters Lani and Carlie, are both in 3rd grade.