v Rainbow Comm. Athlete of the Month: Wyatt Olberding - Sports in Kansas 
Warning: include(../includes/bodytag.php): failed to open stream: No such file or directory in /home/kansass/public_html/ks/news/index.php on line 36 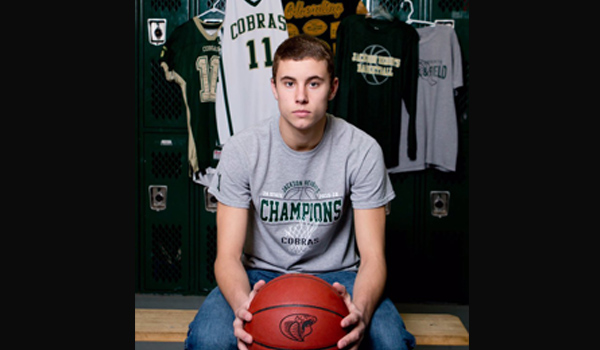 The Rainbow Communications Athlete of the Month from their Northeast Kansas coverage area over the month of March is Jackson Heights senior Wyatt Olberding for his play over the 2017 basketball season.

Olberding, a senior guard, was one of the top scorers in the entire state of Kansas in 2016-2017 by averaging 22 points per contest. He earned first team all-state honors in 2A from Sports in Kansas. Olberding was also an all-state honoree as a junior last season when he helped lead the Cobras to the 2A state championship. Olberding scored over 1,000 points (1,176) in his career for Jackson Heights. He wasn't just a scorer either as he had over nine rebounds, three assists, two steals and two blocks per contest as a senior. He averaged at least 10 points per contest every year from his sophomore year until his seinor year. As one of the most consistent scorers in Kansas, he scored in double figures in every single game this season and only didn't score in double figures three times last season. The Cobras finished as the 2A sub-state runner-up this March losing to eventual third place team Bishop Seabury Academy.

Rainbow Communications would like to congratulate Wyatt on an oustanding career at Jackson Heights.