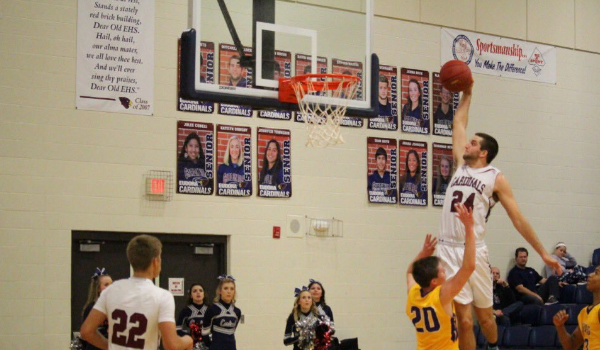 CHICAGO (March 20, 2017) — In its 32nd year of honoring the nation’s best high school athletes, The Gatorade Company, today announced Mitchell Ballock of Eudora High School as its 2016-17 Gatorade Kansas Boys Basketball Player of the Year. Ballock is the first Gatorade Kansas Boys Basketball Player of the Year to be chosen from Eudora High School. The award, which recognizes not only outstanding athletic excellence, but also high standards of academic achievement and exemplary character demonstrated on and off the court, distinguishes Ballock as Kansas’s best high school boys basketball player. Now a finalist for the prestigious Gatorade National Boys Basketball Player of the Year award to be announced in March, Ballock joins an elite alumni association of past state boys basketball award winners, including Karl-Anthony Towns (2012-13 & 2013-14, St. Joseph HS, N.J.), Dwight Howard (2003-04, SW Atlanta Christian Academy, Ga.), Chris Bosh (2001-02, Lincoln HS, Texas), Paul Pierce (1994-95, Inglewood HS, Calif.), Chauncey Billups (1993-94 & 1994-95, George Washington HS, Colo.) and Jason Kidd (1991-92, St. Joseph Notre Dame HS, Calif.). The 6-foot-5, 195-pound senior shooting guard averaged 25.4 points, 8.6 rebounds, 4.1 assists, 2.4 steals and 1.8 blocks per game this past season, leading the Cardinals (19-3) to the Class 4A-Division I Sub-State championship game. Ballock is a two-time Class 4A First Team All-State selection despite missing all but four games of his junior year with an injury. He averaged 20 points per game as a freshman, helping Eudora to the state championship in 2014. Ballock has volunteered locally as a youth basketball coach and as part of multiple community-service initiatives through the Eudora High National Honor Society. “Mitchell makes everyone around him better,” said Dave Cash, head coach of Paola High. “He is as well-rounded a basketball player as I have seen at the high school level. He can do a lot of different things to help his team.” Ballock has maintained a weighted 3.76 GPA in the classroom. He has signed a national letter of intent to play basketball on scholarship at Creighton University beginning this fall. The Gatorade Player of the Year program annually recognizes one winner in the District of Columbia and each of the 50 states that sanction high school football, girls volleyball, boys and girls cross country, boys and girls basketball, boys and girls soccer, baseball, softball, and boys and girls track & field, and awards one National Player of the Year in each sport. The selection process is administered by the Gatorade Player of the Year Selection Committee, which work with top sport-specific experts and a media advisory board of accomplished, veteran prep sports journalists to determine the state winners in each sport. Ballock joins recent Gatorade Kansas Boys Basketball Players of the Year Jerrick Harding (2015-16, Wichita Southeast High School), Dean Wade (2014-15, St. John High School), Clay Custer (2013-14, Blue Valley Northwest High School), Semi Ojeleye (2012-13, Ottawa High School), Perry Ellis (2011-12, 2010-11 & 2008-09, Wichita Heights High School), Travis Releford (2007-08, Bishop Miege High School), and Tyrel Reed (2006–07, Burlington High School) among the state’s list of former award winners. As a Gatorade Player of the Year, Mitchell will be able to select a national or local youth sports organization to receive a grant as part of the Gatorade Play It Forward program. Every Gatorade Player of the Year state winner receives a $1,000 grant to donate and will have the opportunity to enter for an additional $10,000 spotlight grant by writing a brief essay explaining why their selected organization deserves additional support. 12 spotlight grants – one for each sport – will be announced throughout the year. To keep up to date on the latest happenings, become a fan of Gatorade Player of the Year on Facebook and follow us on Twitter. For more on the Gatorade Player of the Year program, including nomination information, a complete list of past winners and the announcement of the Gatorade National Player of the Year, visit www.gatorade.com/poy.