v Faces in KS: Clayton Fowler & Danen Kistner - Sports in Kansas 
Warning: include(../includes/bodytag.php): failed to open stream: No such file or directory in /home/kansass/public_html/ks/news/index.php on line 36 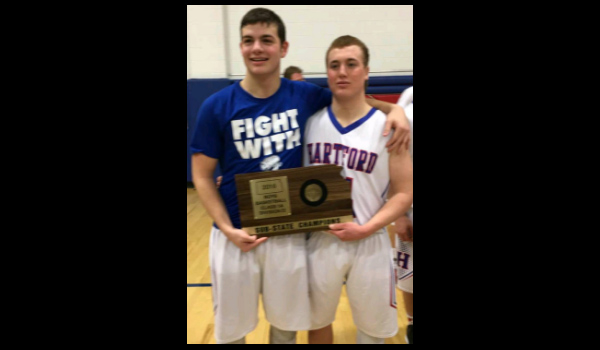 Hartford is a small Kansas town, located just 18 miles south east of Emporia, with a population of under 400 people. The high school, Hartford High School, has an enrollment of just 60 total students and features two of the best small school athletes in the state of Kansas this season in seniors Clayton Fowler and Danen Kistner.

Fowler, a 5-foot-8, 170-pound senior, was one of the top 8-man running backs in the state of Kansas this fall. He rushed for 1,613 yards with 37 touchdowns, and had another 583 yards receiving with six scores. Fowler is a 2017 Kansas Shrine Bowl selection. In basketball he can do a little bit of everything. He averages 17.6 points per game, 7.3 boards, 5.2 assists and 3.2 steals. Fowler, an all-state football player, is also an all-state selection in basketball.

Kistner, a 6-foot-1, senior point guard/shooting guard, transferred to Hartford from Waverly his junior year, and since then has been an absolute stud on the basketball court. It's rare for high school players to have 1,000 career points, but Kistner is even more rare, as he went over 2,000 career points at sub-state last week. He even earned all-state honors at Waverly as a sophomore before coming over to Hartford. He is averaging 22.3 points per game, 9.3 rebounds, 4.6 assists and 3.3 steals per contest. Kistner went 16-5 as the quarterback at Hartford, the year before his arrival the Jaguars went 4-5. Kistner has been an all-state selection from Sports in Kansas in basketball over the last two seasons.

Last season Fowler and Kistner led Hartford to a second place finish at the 1A-II State Basketball Tournament, coming up just two points short to Attica (54-52). Hartford also took fourth at the 2015 1A-I State Tournament. The school is making their ninth boys state tourney appearance this Friday as Fowler and Kistner will look to lead them to their first ever state title. Hartford has only made the Final Four twice (2015, 2016).

The Jaguars will open up state tournament play this Thursday against Otis-Bison at 4:45 pm in Dodge City. Hartford is the three seed at 18-5, while Otis-Bison is the sixth seed at 16-7. We caught up with the two outstanding seniors below in the latest Q&A edition of Faces in Kansas.

Special Thanks to Hartford High School for powering this feature.

A: My mom and dad started taking me to basketball, and football camps when i was 4 years old.

A: Football was great, it was special to me that we won districts, and bi-districts because that was our goal coming in to freshmen year, and to achieve that as a senior that really means alot to me.

A: I have been playing basketball for 14 Years.

Q: What has this season been like for you so far?

A: This season has been great! We are having another great year, we have achieved many goals this year including a Lyon County League Championship, and our 4th straight Sub-State Championship

Q: Other key players to look out for on your team besides you two?

A: Parker Lee, and Kade Spresser

Q: Other good players in your area/league?

A: It is really helpful to have a player like Danen, because he does so many things well, that it takes a lot of pressure of me, and the rest of our teammates.

A:  I am planning on walking onto the football team at Emporia State University.

A: We have to compete every possession on the defensive side of the ball, have good shot selection, and limit turnovers.

Q: How would you describe yourself on the court in basketball?

A:  I like to mimic Russell Westbrook’s playing style.

Q: What’s it like to play for your coach?

A: It is fun to play for Coach Pat, I think every practice since 7th grade he has yelled at me about one thing or another, so i am appreciative that he is always trying to make me a better player, and person as a whole.

A:  I was born, and raised on a farm outside of Hartford, so during my free time

I was either helping dad on the farm, or i was playing sport, whether if it was Football, Basketball, or Baseball.

A: The Hartford Bar.

Q: Something the average person wouldn't know about you?

A: I have asthma

A:  Helping out on the farm.

A: I started playing basketball and flag football in kindergarten through the local rec center.

A: Football went really well for us this year. We won our District and then won our Bi-district game, and lost to Pike Valley in the Regional playoff game. We finished our season with a record of 9-2.

A: I have been playing basketball since kindergarten, I was 4 or 5 years old.

Q: What has the season been like for you so far?

Q: Other key players on your team to look out for besides you two?

A: We have a really good group of guys. My little brother, Dalen Kistner, along with Luke Ikerd, Justice Kemmerer, Kolton Neill, and Bobby Thomas have really stepped up for us in big time moments. They scored when we really need a bucket and if we need someone to shut one of their players down, one of those four are always embracing the opportunity to make this team better. Those four are definitely the glue to this team.

Q: Other good players in your area or league?

A: There are a lot of good ball players in our league. I would say that some of the notable players would be Dalton Sporing from Burlingame, Drew Ott from Lebo, Damon Schmidt from Olpe, and Chonnor Ludolph from Southern Coffey County.

A: It’s definitely special. He’s a special guy not just as a player, but as a classmate and person. It seems like every time we need something to go our way, Clay is right there making things happen. I’ve had the privilege of playing against him and with him throughout the years growing up. He’s a great ball player. He will do great things for Emporia State Football.

A: I had one offer to play college football, and I had several offers to play college basketball. I decided to continue my education and basketball career at Bethel College. I will sign to officially become a Bethel Thresher on March 14th.

A: Definitely staying focused and playing together. If we just go out and play together like we know how to, I think we have a good shot at it. We just have to take it one game at a time.

Q: How would you describe yourself on the basketball court?

A: I go out and I play hard every night, show good sportsmanship, and just compete. I do what I can to make my team the best possible.

Q: What is it like to play for your coach?

A: Man, Coach Gardner is great. I love playing for him and I wouldn’t want to play for anyone else. He’s very intense, and I love that. He brings the best out in us everyday. He pushes us to be the best. I wouldn’t want it any other way.

A: Having transferred in at the beginning of my junior year, I can’t really say that I have been here my whole life, but what I can say is that I am very glad that we moved there. I love the Hartford/Neosho Rapids community. Everyone has each other’s backs and the just respect each other. I am very proud to say that I am a Hartford Jaguar.

A: I’m going to be honest with you, we have a bar and a gas station that sells pizza and that’s it. It’s great pizza and the bar has great food as well.

A: That’s tough. I would have to say History.

Q: Something the average person wouldn’t know about you?

Q: Where do you see yourself in ten years?

A: I plan to be a sports analyst/writer, and I suppose have a wife too. I wouldn’t mind living back home in Hartford.

A: I was a part of the Bronze Medalist 2016 19&Under USA Basketball Team that traveled to Europe to play in the United World Games.