v Faces in KS: Haley Albers - Sports in Kansas 
Warning: include(../includes/bodytag.php): failed to open stream: No such file or directory in /home/kansass/public_html/ks/news/index.php on line 36

Haley Albers of Cheney is averaging nearly a double-double in 2017. 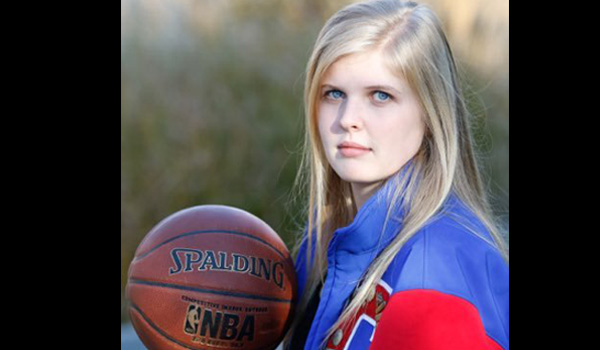 Haley Albers, senior at Cheney, a high school just outside of the Wichita area, has been one of the top 3A players in Kansas over the last three seasons. This season Albers went over 1,000 points in her career, a milestone that was a goal of hers from a young age.

"I had been playing basketball since kindergarten. I wasn't really thinking of the 1,000 points at the time when it happened but after I had realized it had always been a goal of mine and I was really excited. This season has went pretty well so far but it's kind of bittersweet because its my last one in high school." Albers said.

Albers, a 6-foot-1 senior, has averaged at least 14 points and eight rebounds per game over the last three seasons. Last year she averaged over 16.0 points per game and eight boards to earn First Team All-3A from Sports in Kansas. This year she is nearly averaging a double-double with 14.9 points per game and 9.8 boards per contest. The senior has signed to play at Division II Newman University in Wichita next season.

Albers isn't only a basketball player either, she also gets it done in the classroom. She has a perfect 4.0 GPA as a student. She is the Student Council President and is involved in National Honor Society, BPA, Spanish Club and Book Club. She aspires to be a Sports Medicine Physician.

Cheney is looking for its first state tournament appearance in girls basketball since 2011. They have 12 appearances all-time as a school. We caught up with the outstanding senior below.

This feature is presented by D'Marios Pizza and Benny's Burgers & Shakes, wishing Cheney best of luck over the 2016-2017 basketball season

We have a local youth recreation program in Cheney and my parents signed me up for some type of sport year round since kindergarten. They both love sports and really encouraged me to get involved from a young age. I fell in love with competing and now athletics are one of my biggest passions.

How long have you been playing basketball?

What has the season been like for you so far?

This season has been great! It’s kind of bittersweet because it’s my last year, but I’m enjoying it a lot. Our team has been playing really well together, and we’re hoping to finish out the season strong and make a run into the post-season.

Other key players on your team to look out for?

Best player that you have ever played against? Other good players in your area/league?

It was really neat. At the time, I didn’t really think about it, but afterwards I was pretty excited. It’s always been a goal of mine. Growing up, I saw good players reach this achievement, and I knew that someday I wanted to achieve it as well, so it was pretty exciting.

Next year I will be playing basketball at Newman University.

What will it take for you guys to compete for a 3A title this year?

How would you describe yourself on the court in basketball?

I would say that I’m pretty focused and determined. When I step on the court, the only thing that matters is winning the game. I don’t really show a lot of emotion, so my mom jokes around and says that I don’t have any fun, but really I’m just super zoned in on the task at hand.

What's it like to play for your Coach Scheer?

It’s a lot of fun. He’s pretty intense. Coach Scheer expects a lot; you have to be willing and ready to work hard. He’s not afraid to tell you the truth, so you just have to take it with a grain of salt. He’s a great guy and has helped me so much over the last 4 years.

What is it like to grow up in Cheney?

Cheney is a great place to grow up. It’s pretty small so you know just about everyone and everyone’s a friendly face. Our community is very supportive of our schools and programs, and it’s really just an awesome place to grow up.

Best place to eat in Cheney?

We have quite a few restaurants in Cheney. I like to eat at D’Marios; it’s a pizza place.

Something the average person wouldn't know about you?

I love to read and am kind of nerdy