Dacota Motter of El Dorado after capturing the 4A state wrestling title. 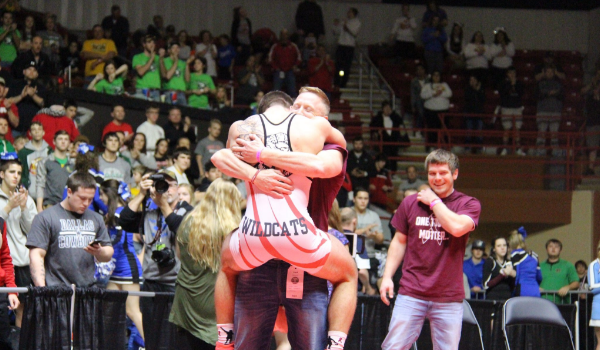 Michael Jordan, Lebron James, Peyton Manning and Joe Montana have all been called heroes at some point in their careers. While each have a buzzer beating shot or a game winning touchdown, do they really fit the meaning of the word?

According to Webster's Dictionary, the definition of a hero is a person admired for achievements and noble qualities along with someone who shows great courage.

Enter El Dorado senior Dacota Motter whose story has captured the hearts of people across the state.

Motter began wrestling as a young kid with his father rarely missing a match. The duo loved the sport and practiced all the time. They had many goals and hopes for Motter as he excelled in this sport, but the ultimate goal was a state championship.

During his first three years of high school, Motter came close to this as he placed each year in the state tournament. With his father in attendance Motter placed second as a freshman and third during his sophomore and junior seasons.

While battling his opponents on the mat, Motter was supporting his father off the mat in a battle against cancer. While many would shut down and understandably so give up extra curricular activities, Motter did the one thing he does best, he hit the mat.

While Motter ran through his opponents on the mat, off the mat his fathers condition took a turn for the worst. Despite all of this, they found a way to be together as Motter continued to chase their dream.

On senior night Motter along with his family including his father were honored before his match. As tears fell from athletes and spectators, his father sat mat side watching Dacota pick apart his opponent in a pinfall victory.

Heading into regionals Motter had taken over as the number one ranked athlete in his weight class. The dream of a state title was now transitioning into an expectation.

For the first time since the early 2000's El Dorado was selected as a host for regionals. Not only did this give the Wildcat athletes a chance to hit their home mats one last time, but it gave Motter's father another chance to see Dacota.

Two pinfall victories led Motter to a regional championship match against Chance Rodriguez of Holcomb. A full house set the stage for an emotional finale as Motter stepped onto the mat with his father sitting just feet away. Motter wrestled flawlessly in a 7-0 victory. He was untouchable dominating one of the better opponents in his weight class. After his hand was raised, Motter raced over and hugged his father as they celebrated a regional championship and knew they were one step closer to their dream.

Motter's regional title qualified him for the state tournament which was scheduled for the following weekend in Salina. The plan was for his father to join the team and see his son give it one last go.

On Tuesday things took a turn as his condition became worse, and on Thursday everything changed. Motter's father passed away Thursday, just a day before Dacota would compete in the state tournament. While Dacota could have just stayed in El Dorado and nobody would have said a word, instead Motter showed a ton of heart and courage as he decided to finish this chapter on the mat.

"Dacota is one of the toughest young men I know," said Reynolds. "He wanted to come to Salina and go get that state title for himself and for his dad."

If you ask any of Dacota's coaches or teammates they'll tell you not only is he a stud on the mat but he's an extremely humble and helpful person off the mat.

"He is like a brother to me," stated teammate Payton Sadowski. "He can be hard on us when we need it and always pushes us. But most importantly he's always there when we need him."

On the mat Dacota has quite the accolades. Motter has had a total of 172 matches in his career, he's been victorious in 150 of them.

For three straight years Dacota nearly reached the dream of a state title, each time coming up one match short.

As a freshman Motter finished 33-7 on the season. In the state tournament he defeated his first three opponents reaching the state championship match. Motter fell just short that year ending as the state runner-up.

During his sophomore campaign, Dacota went 31-7. In Salina he lost his second round match sending him to the consolation bracket. Motter then tore through his opponents as he rattled off four-straight wins to pick up a third place finish.

In his third go around, Motter was a favorite entering the state tournament with a 36-4 record. After winning his opening match by fall, Motter again fell victim in the second round as he was sent to the consolation bracket. For a second-straight year Motter pulled out four-straight wins in the consolation bracket to finish third.

As a senior, Dacota was nearly perfect finishing 33-1 on the year. His lone loss was to the eventual class 5A state champion.

His victories during the regular season include those of class 6A state champion Nick Jouret of Olathe South, class 4A second ranked Tyler Price of Holton, third ranked Chance Rodriguez of Holcomb and fifth ranked Logan Baird of Pratt among many others.

Motter has been on a league champion team, a state runner-up team and individually he's a three-time regional champion all leading into one last ride at the 2017 state tournament.

Dacota entered as the top seed at 170-pounds in Salina. In his first match since his fathers passing, Motter picked apart Trai Warburton of Bonner Springs in a pinfall victory. In the semi-final round he faced sixth ranked Dauson Whiteley (Abilene). Motter looked dominant in a 19-4 tech fall victory sending him to the state title match on Saturday night. Dacota would have one last shot at he and his fathers dream.

State finals Saturday is unlike any other athletic event around. The respect between these coaches and wrestlers is a unique bond only understood by the men who don these singlets and head gear. While most coaches wear suits for the title matches, El Dorado broke tradition a little bit for a special case.

Throughout his dad's battle with cancer, One Tough Motter became their rally sign. T-Shirts with the slogan and cancer ribbons were made, and El Dorado's coaches along with managers decided to wear them for Dacota's final match in a touching tribute.

Saturday's matches began at 9:00AM but Dacota had to wait until around 6:30PM to begin. The long day allowed over 100 fans from El Dorado to make the trip to Salina, a majority wearing their One Tough Motter shirts. As the title match participants were announced, the roar of the crowd for Motter was similar to ones heard at a Chiefs game.

"I've been doing this for awhile and that was unlike anything I've ever seen," Reynolds said of the crowd. "This is a special community, we take care of one another. Everybody here knew of the situation and they backed Dacota."

Traditionally coaches, managers and a videographer are allowed on the mat but on Saturday El Dorado brought Motter's family mat-side to watch his final shot.

Dacota walked out with a cancer awareness ribbon on his singlet, took a second and pointed to the sky before engaging in a handshake with his opponent Tyler Price of Holton.

Motter struck first with a takedown in the opening period giving him a quick 2-0 lead. In the second period, Motter added another point with an escape to take a 3-0 lead. With a little over a minute left in the second period, Motter showed his strength as he recorded his second takedown for another two points taking a 5-0 lead. Motter finished with one final takedown as he defeated Price 7-0 completing he and his fathers dream of that state championship.

"Four years of all that work, I better have got one," Motter said with a slight smile. "All of that hard work and effort it played out like I wanted it too. Ending my senior year with a win."

As the closing seconds ticked away, the crowd rose to their feet giving Motter a standing ovation. As time expired he came to his feet, pointed to the sky and then grabbed the ribbon on his singlet ripping it off stating "you no longer have cancer". Motter then leaped into Reynolds' arms embracing in a much overdue celebration.

"It is a lot of closure," stated Reynolds. "Dacota has been working so hard for so long, this was the one goal he and his dad had been chasing and he has got it. Usually as a coach you have kids that look up to you, but I'm a coach that looks up to one of my wrestlers with the utmost respect. It's more than a bracket, more than a medal it's everybody who is here. You couldn't have had it any other way."

Motter then made his way into a hallway in the Bicentennial Center where he was greeted by hundreds of supporters lining up to congratulate him and take a picture with the new state champion. Along with the hundreds in attendance, El Dorado students and fans alike tuned in to watch a life stream of his match which received over a thousand views.

"El Dorado is the best crowd I could ever ask for," an emotional Motter stated. "When you are in need they will do anything for you. Best town you could ask for, they're perfect."

While James, Jordan, Manning and Montana may have had heroic moments in their career, they don't fit the full description of the word. A hero is One Tough Motter.