v Faces in KS: Conner VanCleave - Sports in Kansas 
Warning: include(../includes/bodytag.php): failed to open stream: No such file or directory in /home/kansass/public_html/ks/news/index.php on line 36

Conner VanCleave of Holcomb can do it all and is one of the best in Kansas. 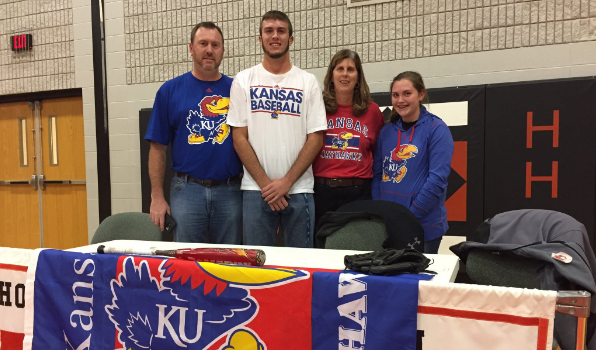 It’s not very often that you can find a 6-foot-7 athlete that is capable to play three sports in high school and excel in all three sports at a high caliber. Conner VanCleave is one of the few exceptions for Holcomb High School, located seven miles west of Garden City in western Kansas, the Longhorns compete in class 4A-II.

VanCleave began playing football, basketball and baseball when he was a 6-year-old and has never looked back on the decision of not playing one or the other. The love for the athletics runs through the VanCleave family.

In the fall you’ll find VanCleave on the grass football field just south of the high school where he has dominated Great West Activities Conference opponents. VanCleave was a big part of the Longhorns 2016 state title team and was apart of the team this past fall that lost in the semifinals of the playoffs to eventual champion, Pratt. VanCleave was a three-time first team all-GWAC selection at defensive end, as well as two-time first team all-GWAC tight end. He was also a two-time first team all-state selection at defensive end as well as at his tight end position. VanCleave hauled in 81 catches during his career for 1,008 yards and 20 scores. He also accumulated over 200 career tackles.

The Longhorns have proved themselves as one of the top teams in 4A-II and carry an 18-1 record into the final game of the regular season on Friday against Hugoton. The Longhorns are currently No. 1 in 4A-II after defending state champion Wichita Collegiate was beaten by Andale this past Friday.

The real work for VanCleave begins in the spring when he transitions from the basketball court back outside to the Longhorns baseball team. VanCleave intimidates opposing batters because of his 6-foot-7 frame and wicked breaking ball. VanCleave’s 0.73 career ERA is something that you’d see in MLB The Show video game, nonetheless real life. He has compiled 311 strikeouts in 182 innings pitched and opponents are batting just .158 against the lefty. VanCleave gets it done in the batter's box as well, hitting .536 in his career to go along with 93 RBIs and eight home runs.

VanCleave will carry his baseball career to Lawrence next fall where he will play for legendary coach Ritch Price and the Kansas Jayhawks.

Be sure to nominate the Nex-Tech Wireless Western Kansas Athlete of the Month with Sports in Kansas by emailing chetkuplen@kansas-sports.com. Nex-Tech Wireless is a proud supporter of high school sports in the state of Kansas.

How long have you been playing three sports?

I have played all of these sports since I was 6 years old.

In baseball when I was a Freshman we played TMP, the number one ranked team in 3A,that year in our Regional.  We shocked everyone by beating them 1-0 in the Regional Semifinals. In football, it would be being apart of the first football state title in Holcomb history. In basketball would be winning the state championship in 2015 and winning the TOC (Tournament of Champions) this year.

How long have you lived in Holcomb?

I have gone to school in Holcomb my whole life.

What is it like playing for your dad on the baseball field?

Playing for my dad is the best thing, he always expects me to do my best and give everything I have. But sharing all of the experiences I have had in baseball through high school is the greatest thing to me.

Describe yourself as a player

I describe myself as very energetic, hard working, and positive all the time.

In basketball and football I am usually doing the workouts(weights and skills) that our high school coaches set up for us and then go shoot at night for basketball. I also have played on the Central Kansas Elite AAU team in the spring and end of summer for Coach Clint Kinnamon and Scott Bugbee. In baseball I have been playing in North Carolina for the South Charlotte Panthers (Don Hutchins Organization) in the Perfect Game tournament series for the last two summers.  I was able to play against some of the best competition in the United States.

The people that I look up to are my parents. They have always given everything they have to help me reach my goals and dreams.

What made you choose to continue your athletic and academic career at KU?

When I went on my Official visit to KU all of the great things that they showed me with their program and also their academic area just pulled me in really quickly. Having the opportunity to talk with some of the players and coaches and then finishing up the visit talking to Coach Price made me feel like this was a family atmosphere. This atmosphere made me want to go there.

You've got a big body frame and that is a big weapon for you on the football field, basketball court and baseball field. How would you describe your ability to play all three sports at the highest caliber?

I play very strong and aggressive but can be very finesse and athletic at the same time.  This gives me the chance to be successful in all three sports.

Holcomb has been a dominant team out in western KS during your time in high school, what has been the keys to success in all sports?

We have been very family oriented and work hard not just in games but also in practice. When we were younger we use to play sports in our backyards all of the time. We have very competitive athletes in our school that push each other really hard.  By playing together for so many years, we know each other very well and have high expectation for each other. All of the coaches at Holcomb do an outstanding job.  I give a lot of credit to our success to Coach Teeter in football and Coach Novack in basketball and my dad Todd VanCleave in baseball.  All of our assistants work really hard for us also.

What is one thing that an average person wouldn’t know about you?

I was a center on the offensive line in junior high football.

Who is your favorite NFL, NBA and MLB player and why?

I always pray and say thank you for another game. My mom always makes me bacon for breakfast.

Do you have any superstitions?

My dad and I always do our handshake before games.

Describe yourself in one word

Any other additional information that would be interesting to know?

I was apart of the Central Kansas Elite that won the MAYB National Championship. The baseball team that I play for in North Carolina, the South Charlotte Panthers, took 2nd this last summer in the nation’s biggest tournament in Atlanta Georgia out of 384 teams. The other thing  would like to say is that I am very thankful and proud of the Holcomb Community for all that they do.