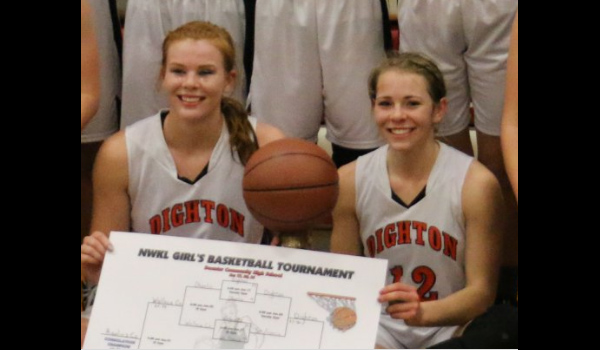 The Nex-Tech Wireless Athlete of the Month from Western Kansas features two Dighton senior basketball players in Jordan Speer and Sara Cramer. Speer and Cramer just went over the 1,000 point career mark in the same game on Tuesday night, not something you see every day if hardly ever at all with two players on the same team.

The Hornet seniors have been playing together since first grade and led Dighton to a 1A-II state championship last March. Cramer leads the squad in scoring this season with 17.5 points per contest, while Speer isn't far behind with 15.8 points per game. Speer, a 5-foot-11 forward/center, has scored in double figures in all 16 games this season, while Cramer, a 5-foot-5 guard, has scored in double figures 15 of the 16 games. Cramer isn't just a scorer either she is a complete player averaging over four assists per game and nearly six steals per contest. Speer, who is a multiple time state champion in track and field in the shot put and javelin in 1A, also leads the squad in rebounds with nearly eight per game.

Dighton, led by head coach Amy Felker, is currently 15-1 on the season and is ranked #5 in 1A-I after moving up from 1A-II last season where they won the state title. They will be back in action this Friday at 6pm as they travel to Hoxie. This isn't the first time we've covered Dighton this season either, Dylan Foos, an all-state football player, was a past honoree for Nex-Tech Wireless Athlete of the Month during football season. Also, Tyler Lingg was a featured athlete on Faces in Kansas last month as he also went over the 1,000 point career mark in basketball. Nex-Tech Wireless would like to congratulate all the Hornets on their oustanding success in 2016-2017.