v Faces in KS: Cal Hartley - Sports in Kansas 
Warning: include(../includes/bodytag.php): failed to open stream: No such file or directory in /home/kansass/public_html/ks/news/index.php on line 36 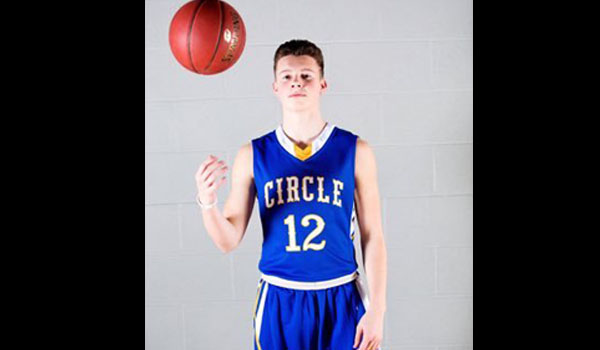 Cal Hartley, a 5-foot-11 senior guard at Towanda Circle High School, located just outside of Wichita, has been one of the best scorers in the state over the last two seasons. Now he has something to remember and claim for the rest of his life about his basketball days as he hit the elite 1,000 point milestone in his career back in late January.

"It's an honor to know that all those hard workouts over the years are starting to pay off. If it wasn't for all my teammates, I couldn't have done it. Its an honor to be part of the club, but I owe a lot of my teammates." Hartley said.

Hartley is having a huge season senior in which he is near the top scorers in the state, averaging 24.0 ppg, while also managing to pick up 6.4 boards per contest, and 4.0 assists. He has a career average of 16 points per game. He once hit eight threes in a single game, a school record at Circle, and has the school record for three pointers in a season with 51, a record he has since broken again this year and counting. Hartley was a second team All 4A-I pick last season from Sports in Kansas.

"Everyone calls me just a a shooter, but I feel as if my game is more versatile. I have spent thousands of hours shooting and working on the fundamentals of my shot. I do feel like my game is more than shooting though." Hartley said.

Hartley's main athletic focus may just be on basketball but he is much more than a basketball player. His favorite subject in school is Math and he maintains a 4.0 GPA. He has been the Class President since the sixth grade and is in the National Honor Society at his high school. Cal gives credit to his two sisters with special needs, Claire and Lola, that have made him a better person.

"They weren't supposed to live to be one year old and they are now 10 and 15. I love them very much and they have made me a much better person that I ever would've been." Hartley said.

The season hasn't went exactly the way Cal had planned, with just five wins and nine losses, but he feels like the team is making strides in the right direction.

"We have lost some close ones. Our coaches really care for our players and want the best for us not only on the court but as human beings. We will need to come together as a team and be more consistent in our effort and take pride in the little thing in order to make a run to the state tournament." Hartley said.

We caught up with the oustanding senior guard below in the latest Q&A edition of Faces in Kansas.

I began playing basketball at a very young age. My parents told me when I first started walking, I was given a Little Tikes basketball goal and a ball. The first thing I did was toddle over to it and dunk it. I could barely walk, but I sensed what to do. I grew up playing Biddy Basketball and developed my game from then on.

The season has had many ups and downs. We’ve won some good games, and lost quite a few close ones, too. It has been fun being a senior and trying to lead the team to the best we can be.

Describe yourself as a player?

Everyone calls me just a shooter, but I feel as if my game is way more versatile than that. Yes, I have spent thousands of hours shooting and working on the fundamentals of my shot. It feels effortless to me now. My game is way more than just shooting though. I have good court vision and try to make those around me better. I have a good handle for the ball, I can rebound, and I try to work harder than anyone else. I’ve spent thousands or more hours dribbling and I love the game.

What was it like to hit the 1,000 point milestone?

I have attended many camps, spent countless hours in the gym on my own drilling, and played on an AAU traveling team (Next Level Hoops Academy). I’m a student of the game. I practice it, watch it, and simply love it.

I am undecided on where I want to go, but I definitely want to play somewhere at the next level. I’ve been talking to a lot of coaches and I just want to try to find the best fit for me.

Who are some of the other stud players in your area this season or best player you've ever faced?

I think a lot of the best players this year include guys from past AAU teams I’ve played on. I’ve played against a ton of great players with AAU over the years, and there are many great players I’ve played with and faced. I consider them good friends and brothers. They include Brayden Neuschafer, Chase Oberg, Ryan Wilson, Nyjee Wright, Grant Bugbee, Cole Taylor, Cole Kinnamon, Matt Pile, Dylan Vincent, Bryant Mocaby, Tyler Brown, Cody McNerney, and Ben Pyle.

What is your guys record and what's it like to play for your coach?

We are 5-9, but have lost several close games. Bo Horyna, Adam Glendenning, and Jesse Lee-Brockhoff have been my coaches the past 3 years. They really care for all the players and want the best for us, not only on the court but as human beings as well. They push us to be the best we can be and work us hard.

What will it take to make a run and get into the 4A-I state tourney?

We need to come together as a team. We’ve made strides in the right direction, but now we just need to put it all together and keep giving it our all. We need to be consistent with our effort and take pride in the little things.

What is it like to grow up around Towanda and go to Circle HS?

I actually grew up in Benton. I have enjoyed attending Circle schools and loved calling Benton my home.

No, I have just focused on basketball all of high school.

Math or Strength and Conditioning

Bleacher Report – I like to get updates on the best highlights around the sports world.

Best place to eat around your area?

I love mint ice cream, shoes, and 21 Jump Street is the best movie of all time.

Any other additional things we should know about you?

I’m more than just a basketball player. I have a 4.0 GPA, I’ve been my class president since the 6th Grade, and I am in NHS. I’ve grown up with two sisters that have Special Needs, Claire and Lola. I love them very much, and they have made me a much better person than I ever would’ve been. They weren’t supposed to live to be 1 year old, but today they are 10 and 15.