v Faces in KS: Davis Dubbert - Sports in Kansas 
Warning: include(../includes/bodytag.php): failed to open stream: No such file or directory in /home/kansass/public_html/ks/news/index.php on line 36

Davis Dubbert of St. Johns/Tipton is one of the top athletes in KS. (Photo: Jeri Dubbert) 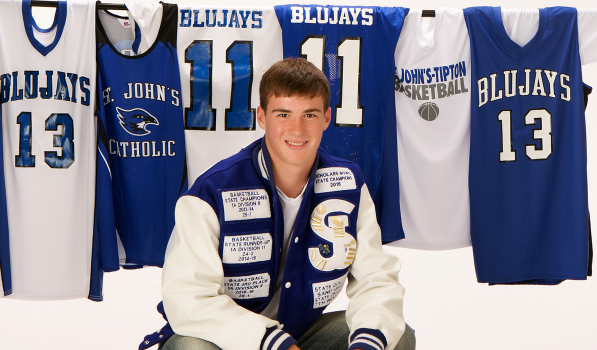 Not only is Davis Dubbert of St. Johns/Tipton one of the top multiple sport athletes in Kansas, he made national news earlier this school year in December for becoming a National Finalist for the Wendy's High School Heisman in New York. Not something you see everyday in Kansas from a catholic high school of just 44 students in Beloit, Kansas. In fact, Dubbert's high school is so small that Beloit-St. John's combines with Tipton Cathlolic High School, 30 minutes away with 25 students, to co-op for basketball and football. It's a perfect combo for Dubbert's parents, his mom who attended St. John's and his dad who grew up in Tipton. Regardless of school size, Dubbert has proved to be one of the top multiple sport athletes in Kansas over the last few years.

"The Wendy's HS Heisman experience was one of the most amazing and humbling experiences of my life. I never expected it and to be able to represent my community and Kansas on a national level was great. It was nice to recieve an honor that is not only based on athletics, but academics and community involvement." Dubbert said.

We best know Dubbert for what he does on Tuesday and Friday nights over the school year. In football, he has been a two time all-state selection in 8M-II at quarterback and linebacker. The 6-foot-4, 190-pound, senior, threw for 1,604 yards with 16 TD while rushing for 342 more with 12 more scores this fall. In basketball, he has been a regular for the Blujays since his freshman year. He has averaged over 20 points per game over the last two seasons, including 23 points per game as a junior in 2015-2016 and 20 points per game so far in 2016-2017. He also averages 10.5 rebounds per game this season. Dubbert is an absolute athlete, he won the state 1A high jump title last May in Wichita, while taking third in the javelin, and qualifying in the discus. He had a season best of 6-foot-6 in the high jump last season to rank among the best in all classes of Kansas. His javelin throw of 172'3" was also near the top in 1A last season.

The training never stops for Dubbert. You can often find him in the gym shooting non-stop on his own time. During the summers he hits the weights and training hard for five to six days a week. His shooting routine has proved to pay off as he holds the Kansas State record (Kansas Sports Hall of Fame) for consecutive three pointers made with 11 in a row over three games last season. Dubbert's drive seems to be what separates him from other athletes at his level

"My main motivation comes from other great athletes. I see what my peers are doing better than me and it drives me to try to improve my game." Dubbert said

Dubbert looks to continue that drive and success this season as he looks to lead his Blujays (8-0), coached by Lance Bergmann, into the 1A-I state tournament this season.  SJT won a 1A-II state title in 2014, led by his all-state brother Trey, when Dubbert was a freshman contributor. St. Johns/Tipton is currently the number one ranked team in 1A-I in the latest KBCA Rankings. We caught up with the outstanding senior student athlete below.

Ever since I can remember I’ve been involved in sports. Everyone in my family loves athletics so I was always involved with whatever sport happened to be in season. There’s never been an off-season for me.

How did the football season go for you this year and how is basketball going so far?

We had a successful football season going 7-3. Our three losses were to two State Champions and a Sub-State Runner-up and we competed tough with all of them even though we were outmatched size-wise in almost every game we played. Basketball is off to another good start as we are undefeated and trying to win our league tournament this week. We look to try and get the State Championship back since we’ve missed out on it the last two years.

What did it mean for you to be up for the Wendy's High School Heisman, what was that total experience like and how did that turn out?

The Wendy’s HS Heisman experience was one of the most amazing and humbling experiences of my life. I never expected to receive the National Finalist honor and I was grateful to be able to represent my community and the state of Kansas on a national level. It was also nice to receive an award that is based on athletics, academics, and community involvement. The entire experience of the weekend was filled with memories I’ll never forget. I was able to meet so many amazing people from across the country and I really enjoyed my time with my fellow finalists. Also, seeing the sights New York has to offer and being apart of both the Wendy’s HS Heisman ceremony and the collegiate Heisman ceremony were unbelievable experiences.

What is it like playing for St. Johns/Tipton, being that its two high schools playing as one? Kind of explain that to our readers with practices, how many kids go where etc?

We have a great cooperative going with both schools of St. John’s and Tipton. I think our combined enrollment is around 70 and St. John typically has twice as many students as Tipton. Being 30 miles away we are all great friends and the schools are very similar. It is extra special for me since my dad grew up in Tipton and my mom grew up going to St. John’s. For practices, the Tipton kids come over to Beloit every day except for around 5 practices a year. We play all our games in Beloit except for one football and two basketball games in Tipton.

How much did it help to grow up with an all state brother that did it before you?

My brother has been a great inspiration for me mainly because I see his great work ethic. If you talk to anyone that knows Trey, they will tell you how hard he works. We are also able to compete against each other playing one-on-one all the time which helps each of us get better. I hope to be as great a role model to my younger siblings as Trey is to me.

What is it like growing up in Beloit, they have a lot of success in sports to, did you grow up all playing together?

Beloit has definitely had tons of success athletically in both schools recently. Everyone in town supports everyone and I have lots of friends that go to Beloit High so it’s fun following them and cheering for them because there is no rivalry between the schools. Most of the kids that are great athletes at BHS I grew up playing with or against on town teams in various sports growing up.

Right now I plan to play basketball and major in statistics. I don’t have any official offers but I have had multiple schools show interest in me.

What was it like getting a state record in basketball?

It’s pretty cool knowing that I accomplished something that no one in state history had done. I never thought I would be able to set a state record so setting the consecutive 3-point record was exciting.

What motivates you to become a better athlete?

I would say my main motivation comes from other great athletes. I see what my peers are doing better than me and that drives me to try and improve my game.

What is training like for you, do you lift/workout, practice a lot on your own time?

For basketball I do a lot of shooting and going into the gym on my own time. During the summer is when I hit lifting and high intensity training the hardest. A group of my teammates and I will usually workout around 5-6 days a week during the summer.

For anyone who has never been to a small town football or basketball game, what is it like?

It’s unique being at the small school games because most of our fans truly care about the team and us individually. I can look up in the stands and see mostly people that I know. The support we have at St. John’s is pretty special and the fans aren’t afraid to get loud.

It’s more of a YouTube site but I love watching Dude Perfect videos.

Faith is important to me and I am very involved in my Catholic Church.

Yes I compete in track in the spring and I compete in baseball when I’m not playing basketball in the summer. I used to play golf for my high school but now it is more of a hobby to play when I have time.