v Rainbow Comm. Athlete of the Month: Trenton Henry - Sports in Kansas 
Warning: include(../includes/bodytag.php): failed to open stream: No such file or directory in /home/kansass/public_html/ks/news/index.php on line 36 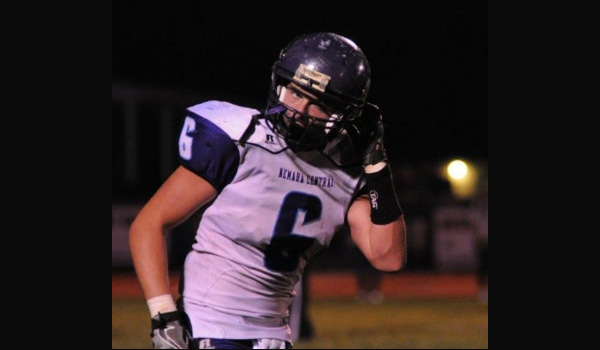 The Rainbow Communications Athlete of the Month from the Northeast Kansas Area selected by Sports in Kansas for their accomplishments over the month of December is Nemaha Central senior athlete, Trenton Henry.

Henry, a 6-foot-1, 205-pound, all-state linebacker, earned several accolades over the month of December for his efforts in football this fall. Henry was one of the top linebackers in 3A this season, registering a team high 120 tackles and 4.5 sacks from his linebacker spot. He also had nearly 300 yards recieving as a tight end. He earned first team all-state in 3A from several publications and earlier this week was selected to participate in the 44th annual Kansas Shrine Bowl. The nod is a big honor as only 34 senior players in Kansas were selected to the East squad, which Henry will be a part of, and 34 senior players on the West squad. Thunder head coach, Warren Seitz, has also been chosen as an assistant coach for the East squad in 2017. The 2017 game will be played in El Dorado at Butler Community College in late July. Henry help lead the Thunder (12-1) to a sub-state runner-up finish this year in 2016. Nemaha Valley grad and former Shrine Bowl participant himself, Derick Hammes, now the Rossville head coach, will be the head coach of the East.

Henry was also a starter on the 3A state champion Thunder baseball team in 2016.