v Sports in KS: Best available football recruits for 2017 - Sports in Kansas 
Warning: include(../includes/bodytag.php): failed to open stream: No such file or directory in /home/kansass/public_html/ks/news/index.php on line 36

Harrison Van Dyne of Blue Valley has blown up in 2016. (BV Touchdown Club) 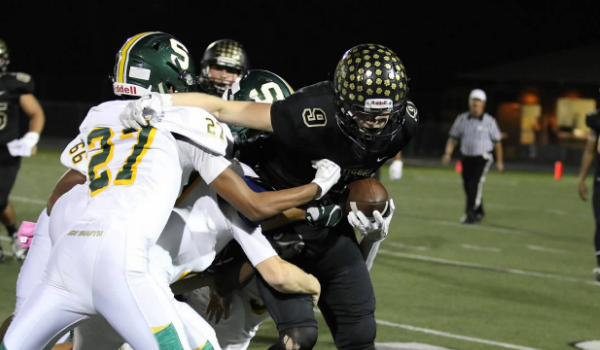 Chet Kuplen takes a look at some of the top under the radar players in Kansas that are uncommitted in the Class of 2017. Only players that have not committed to a college already are listed on this list. If you are on this list and have committed or will commit, please keep us updated if you don’t already. Also special thanks to Ben Mitchum, who helps break down and scout players on HUDL for Sports in Kansas. If you have someone you think we need to see, we want the info, that only helps us out, please send to chetkuplen@kansas-sports.com.

Baldwin is a versatile playmaker on offense that can play running back or receiver. He may be the fastest player in the entire state featuring a 40 yard dash time, in the 4.30-4.35 range, yes that’s FAT ran at a combine in May of 2016. He may have to use a junior college to qualify, but does have one FBS offer from Tulane.

Birch may have the quickest first step in football in Kansas for the class of 2017. The 2x all-state selection is a sack machine. He has an FBS offer from Wyoming and offers at the FCS level. He doesn’t feature elite speed, but he has great instincts. Birch will make a very nice player at the next level. He was part of a group that helped South football generate some interest this year.

Hayley emerged as a prospect as a sophomore and junior but his senior season was cut short in week four after he broke his ankle. Otherwise, we are talking about Hayley being a back-to-back all-state selection and potentially generate more offers. Hayley has a bench of 390 and a squat of 450 pounds. He projects at the next level as an interior defensive lineman, but can play on the edge if needed.

Davis is one of the fastest players in the state and has been clocked in the 4.48-4.54 forty range. He could project as a wide receiver or defensive back at the next level.  Davis is the 3A state champ in the 200 meters, has 10.60 speed in the 100 meters and runs a 400 meter dash under 49 seconds. He’s a very versatile athlete and serves as a receiver, defensive back, punter, kicker and kick returner. Davis may see no offers above the Division II level this season, but will be a steal for a D-II program in Kansas.

The Miege senior was a three-time all-state selection and won three straight state titles for the Stags. Grunhard has one offer from the FBS level (Air Force) and multiple offers at the FCS and below level. His height (6’1”) and length has been the biggest concern for FBS recruiters, but don’t let that fool you this kid can play at a high level and is football smart. His dad, Tim, played for the Kansas City Chiefs from 1990-to-2000, and is only an inch taller than his son. Someone needs to give this kid an opportunity, it’s worth the risk.

Kaufman may not have the size to land an FBS offer right out of high school, but this kid can flat out fly on the football field. He has opportunities to walk on at the FBS level, including Kansas State, and is seeing major FCS interest generate after the 2016 football season. Don’t let the size fool you, Kaufman squats nearly 400 pounds, has a deadlift of 455, and has a 35” vertical. His biggest attribute is his sub 4.5 speed. This kid can get on the field fast for a college in the special teams game, whether as a return man or to block kicks. Kaufman wants to play division one football and if he has to walk-on to do it, that may be the case.

Kirby has an FBS offer from Air Force and his size may be keeping him from not having more. He played in the best league in Kansas and dominated competition from his spot on the offensive line over the past two seasons. He has shown the ability to be a great pass blocker as well as a run blocker, paving the way for Will Evans (1,000+ yards rushing) and protecting QB Matthew Dercher (3,000+ yards passing). Kirby will make a nice offensive guard at the FCS level or above, even though he played offensive tackle for the Tigers. With added weight and strength, Kirby could be a major contributor for a college program.

Size and speed are the biggest concern with Maffry, it isn’t his ability on Friday nights in the states best league over the last two seasons. Maffry had over 350 combined tackles at the 6A level over the last two seasons. He was the non-senior POY from Sports in Kansas as a junior on defense and was the All-Classes POY from Sports in Kansas on defense this season. He has serious division two interest, but may not play football at the next level unless an FBS or FCS come in.

Marlnee is a lengthy linebacker that uses his instincts to get to the football. He also doubles as an all-state pitcher in baseball. Coaches love his size but with added weight and strength Marlnee could become a monster at outside linebacker at the FBS level, where he has one offer (Wyoming).

Pickert known more as a high school defensive end, may see his best opportunity at the next level at Tight End. He had a breakout all-state season in 2016 at defensive end and helped the Thunder to a 6-5 record this season that included two playoff wins. He has multiple FCS offers at the moment and could see a late offer generate from an FBS school. His father played tight end at UCLA, a place where he has a walk-on opportunity. Wyoming has also shown serious interest, a place he visits next month. Pickert is a very athletic recruit, registering a high jump of 6’8” last season in track and field.

Scott, who will be just 17 years old when he enters college next fall, had a breakout senior season where he earned All 4A-I defensive back honors in leading his team to their first ever semifinal appearance in school history. Scott has one FBS offer (Air Force) and is starting to generate more interest from the FBS level.  Scott has a forty in the 4.5 range and features a 36 inch vertical.

Thompson, the 2016 Sunflower Player of the Year, had a breakout campaign at receiver and defensive back for SM East. Thompson was selected as one of the Top 11 players in the state for all classes by the Wichita Eagle and Topeka Capital Journal. He had 794 receiving yards with 11 TD on offense, while racking up 66 tackles on defense. Thompson has the size to be a nice safety at the next level and played a lot of corner in high school. He has a forty yard dash time in the 4.6 range. Academically, Thompson really gets it done with a 28 on his ACT and 4.0 GPA. Several FCS programs are in on Thompson.

Urban, an all-state linebacker and offensive lineman, will need to make the move to being a full-time interior lineman in order to be successful at the next level. He has a motor like no other we’ve seen this year and was a Top 11 player in All-Classes by the Topeka Capital Journal. He was also the 3A Sports in Kansas DPOY. Whether or not he will get an opportunity above the Division II level because of height concern, Urban is a steal at the Division II level. We could see him being a contributor at guard or center on offense, or a defensive tackle. We are not saying he could be a Will Geary, former Topeka High walk-on, now starting at KSU, but there are a lot of similarities in size and motor. You have options in taking a shot on Urban.

Although he may not qualify as under the radar with at least eight offers at the FCS level or above, to us he is still under the radar with only one power five offer (Kansas). Van Dyne has sub 11.0 second speed in the 100 meters, a high jump of 6’6” and had over 1,000 yards receiving this year. Football is in his blood, as his dad played for Michigan in the early nineties. This kid is a steal and has blown up over the last month with multiple FBS offers. He was injured in week seven of 2016 and Blue Valley didn’t throw it as much, so he is a late bloomer in the recruiting world for the class of 2017. This kid has it.

Walker may have to use the junior college ranks to qualifty to get to the FBS or FCS level but he is still under the radar. He has been one of, it not, the top defensive lineman in Kansas over the last two football seasons at Derby, where he won back-to-back titles and was a first team all-state selection. Walker has a 5.0 forty yard dash time, benches 330 and has a 29.5” vertical. Walker may be more suited to play interior defensive line, but can also play off the edge. Walker has also expressed interest in dropping weight and moving to a linebacker spot if needed to.

Williams registered over 500 career tackles at linebacker for the Longhorns. He has seen interest from the FCS level and Division II levels in Kansas, both levels we could see him being a contributor at. Williams has a bench press of 350 pounds, a forty yard dash time in the 4.6 range and a 33-inch vertical. He is a two-time 4A-II Player of the Year on defense from Sports in Kansas. He isn’t the typical 6’2 or bigger frame that many coaches are looking for, but Williams makes up for it with his instincts and toughness on Friday nights.

Wilson has the tools and size to be a division one football player. He may be the best player in Kansas nobody knows about. Coffeyville got things going a little this year but he was a product of being on a  bad team for two years of high school over his sophomore and junior years. He also suffered an injury this season and missed time. He is an all-state hurdler and creates a mismatch for anyone that goes against him. Keep an eye on this 2017 sleeper. His Hudl is worth the look.

Zars has an offer from Air Force at the FBS level and several FCS opportunities, but may be a little more underrated. He has helped pave the way for back-to-back state titles for Mill Valley in 5A. He was a first team all-state selection in 5A over the last two seasons. With some work in the weight room Zars, could turn into a nice player for a college at the FCS level or above.