v Chuck Smith of Colgan retires after 37 years - Sports in Kansas 
Warning: include(../includes/bodytag.php): failed to open stream: No such file or directory in /home/kansass/public_html/ks/news/index.php on line 36

Chuck Smith retired after 37 years as the head coach at Colgan. (Sean Steffen) 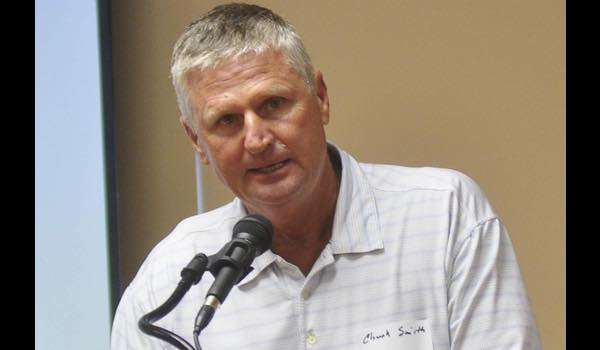 "When you start to talk about high school coaching legends across the state, he is one of the first ones that comes up. If there were a Mt. Rushmore for that, he would be on it. Not only was he an oustanding coach, he was an oustanding person, he always thanked us and made us feel appreciated every interview we ever did with him. And that's not just me, that's everyone I have ever talked to about Coach Smith and his son, Mark, the head coach at Frontenac, is the same exact way. I've never met anyone who didn't respect him as a coach or person, and I played at the rival school, Frontenac." Chet Kuplen, Managing Partner of Sports in Kansas said.

Smith was ranked 45th in the country entering this season among active coaches with the most wins in the country by Max Preps. This season he was only second to Silver Lake head coach C.J. Hamilton, who is over 400 wins, as second all-time in Kansas as an active coach. Smith also had a 66 game winning streak, then the longest in the state, at Colgan that went from 2000-2004.

Smith had four sons play for him while at SMC, all four were all-state selections and Shrine Bowl picks (Nick - 2001, Mark 2004, Jeff - 2006, Chas - 2009). All four also played at Pitt State like their father, an Atchinson native. Smith has also served as a state representative in Kansas, while being the head coach at Colgan.

"My dad has been my role model and my biggest influence throughout my life growing up. The impact he made on my career and everyone at SMC is priceless. He makes everyone around him want to be a better person and I hope I can become half the man he is right now. He sacrificed so much for his family and school and he never worried about recogniton." Smith's son and current Frontenac head coach Mark Smith said.

38 years ago Coach Smith replaced the legendary Frank Crespino, a KSHSAA Hall of Fame Inductee, who won state titles in 1974 and 1975 at SMC. Colgan will be looking for their first new head football coach since that time and just their sixth head football coach in school history.

Social media genearated quite the buzz about Coach Smith's retirement, here is what they are saying.

"Wow, A coaching legend in the state! I just had an opportunity to speak with him this past weekend! What a great man!" - Steve Martin, KFBCA President, HC Wichita Northwest

"One of the state's all-time greats and a pretty darn good coach, too. Nothing but the best wishes for Chuck. " - Brent Maycock, Topeka Capital Journal

"Not only a great coach, but an even better role model" - Jason Marietta, former Colgan player and Retail Sales Director at Jakes Fireworks

"I learned something from Coach Smith for the last 12-13 years of interviewing him every week and doing his radio broadcasts, it's that he approached every game the same way, no matter if it was against a team with no wins or a team with 12 wins. A lot of young coaches could learn the way he approached the game, his consistency was like no other." Mike Snow, Progam Director at ESPN 100.7 and host of the Local Show out of Pittsburg.

"It has been an absolute honor and blessing to stand on the sideline with Coach Smith for 12 seasons. There is not a more genuine person in the world and I've learned a lot of football from him over the years. But, football is just a small part of who he is and what he means to our school, parish, and community. I think that is what makes him stand apart." Kyle Wolf, SMC Athletic Director and Defensive Coordinator