v Sports in KS: Several Dual Threat QB's stood out in 2016 - Sports in Kansas 
Warning: include(../includes/bodytag.php): failed to open stream: No such file or directory in /home/kansass/public_html/ks/news/index.php on line 36

Sports in KS: Several Dual Threat QB's stood out in 2016 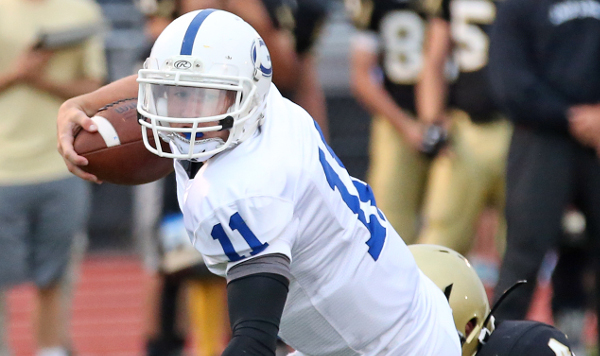 Several QB's had breakout years as dual threats in Kansas over the 2016 season, we look into some of the top ones across the state and their numbers this season. These players got it done through the air and with their legs.

Bradshaw led the state in rushing with 2,734 yards and 31 scores on the way to a Rossville 3-peat in 3A. The first year starter, who had to replace three-time all-state selection Tucker Horak, excelled as a dual threat and also passed for 1,774 with 25 more scores. Bradshaw was as good as advertised in the state title game as he rushed for 281 yards with two scores and threw for 147 more with three scores. Bradshaw was named the 3A Player of the Year on Offense by Sports in Kansas.

Bruna isn’t exactly known as a dual threat as he’s more known for his arm, but he has to make the list because he got it done with his legs over the last two seasons as well, racking up over 1,200 rushing yards combined. He passed for 1,753 this season with 29 scores in limited action due to blowouts, while rushing for 600 more with 13 scores. He finished his career with 5,397 passing yards with 90 touchdowns through the air to just nine interceptions, while rushing for 37 career scores. He led Hanover to an undefeated record this season in 8M-II.

Esau passed for 2,927 yards with 30 touchdowns while rushing for 1,073 with 21 more scores. Esau led the Swathers into the state championship game for the first time since 1992 as they lost to Rossville in OT in the 3A championship in Hutchinson. He also picked off two passes from his defensive back position.

The junior dual-threat quarterback passed for 2,700 yards with 33 scores, while rushing for 1,297 more with six scores. Flaming, who played junior varsity one year ago, led Mill Valley to a second consecutive state title in 5A in his first year as a starting quarterback. Flaming was named a first team All Non-Senior at quarterback from Sports in Kansas.

Friend passed for 2,039 yards with 28 touchdowns, while rushing for 1,268 more with 18 scores. Friend led the Cardinals to the 2-1A title game as they fell to Troy, 28-24, just one year after going 3-6 in 2015. Friend was named the 2-1A Defensive Player of the Year by Sports in Kansas after picking off six passes from his defensive back position.

Henington had a breakout year in 2016 by rushing for 1,012 with six touchdowns and throwing for 1,783 more with 20 touchdowns, to just five interceptions. Henington was named a Top 100 Senior from Sports in Kansas and led the Bluejays to a 8-2 record in 2016.

Murray may have been the most complete dual threat quarterback in the state for 2016 and he led Great Bend into the semifinals for the first time since 2006. He passed for 2,281 yards with 23 scores, while completing 66 percent of his passes. He also added 1,322 rushing with 26 more scores on the ground. Murray was named the 5A Player of the Year for Offense by Sports in Kansas.

Mlekus had over 4,500 yards of offense as a dual threat quarterback in his last two seasons as the starter for the Raiders with 59 total touchdowns. He capped off his senior season by rushing for over 1,000 yards and passing for over 1,000 yards with 32 total touchdowns, despite playing in half of most of the games due to blowouts, for the Raiders, who went 10-1 in 4A-II. He was named the 4A-II Offensive Player of the Year by Sports in Kansas.

Nunez rushed for 1,367 with 20 scores, while passing for 1,168 more with 10 scores. He led Garden City to a WAC Championship and a one loss season in 2016. Nunez was one of the tougher quarterbacks in the state and doubles as a state wrestling champion.

Phillips was more known for his legs but had a breakout season in 2016. He rushed for 2,125 yards with 22 touchdowns, while throwing for another 926 with seven more scores.

Although Schneider is known to everyone as a passer with his Kansas career passing record, he got it done through the air and with his legs in 2016. He passed for 3,035 yards with 31 touchdowns, throwing just seven interceptions in 358 attempts, while rushing for 608 more with 12 scores. SM North has struggled in football over the recent years, but Schneider turned them into a winning program this season as they went 6-5 and picked up two playoff wins, and were very competitive with 6A power SM East in the last game of the year (41-25 L)

Sporing accounted for 63 touchdowns as the Burlingame quarterback this season in leading them to a second consecutive appearance in the 8M-I semifinals. He passed for 1,430 yards, while rushing for 1,221 yards.

Sullivan was one of the best quarterbacks in the state for 2016. He led Goddard to their first title appearance since 1988. He rushed for 1,404 with 17 scores, while passing for 1,629 with 28 more scores. Sullivan was named a first team All Non-Senior at quarterback from Sports in Kansas.

Trapp was one of the better playmakers in 6A this season and did it with his legs and arm, but more so on the ground. He rushed for over 1,500 yards with 28 scores, while throwing for 700 more with seven touchdowns.