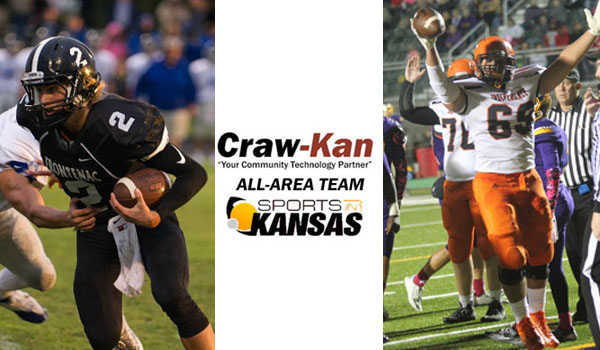 2016 Craw-Kan Player of the Year Honors

Mlekus rushed for over 1,000 and passed for over 1,000, the only player ever to do so at Frontenac at the quarterback position, in leading the Raiders to a 10-1 record this season. The senior all-state quarterback was 17-5 as the Frontenac starter over the last two seasons and racked up over 4,500 yards of offense over the last two seasons. He was also an all-state defensive back a year ago, where he has started the last three seasons as the Raiders went 27-6 over that span with two CNC titles. Mlekus is also a 4A all-state wrestler and will compete at 170-pounds this season.

Usher-Pearson, a two-time all-state selection, was the Southeast Kansas League Defensive Player of the Year as a senior this season. The 6-foot-1, 265-pounder, is one of the best lineman in the state on both sides of the football for the SEK League Champion, Bulldogs. Usher-Pearson showed his athleticism this season and features 5.0 forty yard dash speed, while benching over 300 pounds.

Wiatrak, in his third year as the head coach for the Indians, led them to the playoffs for the first time since the 2010 season. Wiatrak went 3-6 in his first season at SP in 2014, went 6-3 last year and missed the playoffs, but put together a 9-2 season in 2016 to make the playoffs for the first time in six years. Wiatrak is no stranger to the Indian program as he was an All 8-Man quarterback in the early nineties and was a long-time assistant under Doug Tuck, who won two state titles at St. Paul (2000, 2002).

Sports in Kansas handles the entire selection process with input from local media. Special thanks to Mike Snow and Trent Kling of ESPN 100.7 for input on the selections. Also special thanks to Scott Nuzum (Fort Scott Tribune), Sean Frye (Parsons Sun) & Thomas Lott (Indy Daily Reporter) for providing us with info and photos this season.