v 2021 Sports in Kansas 4A All-State Baseball Team - Sports in Kansas 
Warning: include(../includes/bodytag.php): failed to open stream: No such file or directory in /home/kansass/public_html/ks/news/index.php on line 36

Caden Marcum of Paola named 4A Player of the Year from SIK. (photo: Gene Morris) 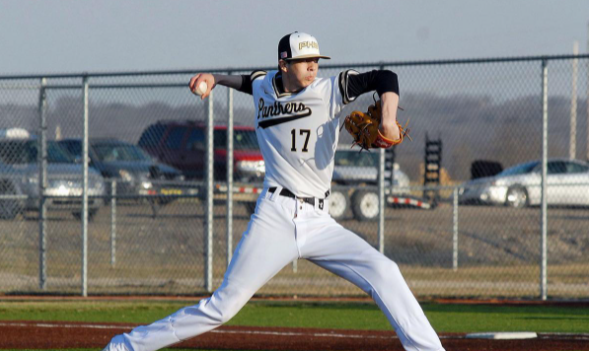 2021 Sports in Kansas 4A Baseball Player of the Year

Paola’s Caden Marcum earned 4A Player of the Year from the Kansas coaches and Sports in Kasnas. A junior pitcher/outfielder, Marcum hit .400 with a .490 on-base percentage and slugged .588. He hit nine doubles, three triples, drove in 24 runs and scored 29. Marcum, a Tennessee commit, has great length at 6-foot-5 and 165-pounds. Marcum is ranked the 18th national recruit in 2022 by Prep Baseball Report and number one overall in Kansas. He has a fastball that has been clocked at 92 mph and sits 88-90 entering the 2021 season.

Sports in Kansas 2021 4A Baseball Pitcher of the Year

Paola finished 22-3 and finished third in Class 4A. Garrett Williams enjoyed a phenomenal school year as the Panthers’ quarterback for a 10-1 squad last fall, and then a big year this spring. He worked 42.1 innings and posted a 5-1 record with a 2.65 ERA. Williams was the team’s heart and soul. He gets equipment out, sets the tone with hustle, and brilliant in classroom. Williams was 4A Pitcher of the Year from the Kansas Baseball Coaches Association. Coach Tony Brummer took over in ’19 after 15 years as an assistant. Paola went 9-10 in ’19 before the turnaround this season.

Special recognition went to Paola junior Dalton Picek, who went 6-1 in a team-high 45.2 innings. Williams posted 64 strikeouts against 23 walks, and Picek delivered 52 strikeouts versus 21 walks. Last fall, Williams passed for 793 yards, rushed for 712 and accounted for 27 touchdowns. Williams finished 21-1 as the starting quarterback in his career.

As well, Paola’s Caden Marcum earned 4A Player of the Year from the Kansas coaches and Sports in Kansas. A junior outfielder, Marcum hit .400 with a .490 on-base percentage and slugged .588. He hit nine doubles, three triples, drove in 24 runs and scored 29

2021 Sports in Kansas 4A Baseball Coach of the Year

Andy Bent continued his impressive turnaround with Clay Center baseball. Before Bent took over, CC finished 5-16, 7-13, 3-18, 1-18, 2-19 and 5-16. In ’15, Bent finished 5-16. The next year, Clay Center went 11-7 and qualified for the state tournament for the second time in school history. Then, Clay Center finished 9-7, 12-10 and 13-5. Like many of the state title/runner-up teams, CC enjoyed a huge improvement to 21-4. The Tigers captured the NCKL outright for the first time in school history and went to state for the third occasion in Tiger annals. At state, Clay Center defeated Topeka Hayden (2-1) and Clearwater (3-2). In the final, Clay Center lost to Bishop Miege, 8-0.

Clay Center finished 4-1 in one-run games after a 2-2 mark in ’19. Two years ago, CC had a total margin of 132-38. This year, Clay Center tallied 210 runs and allowed 100. Clay Center fan base gave the Tigers a standing ovation after the state championship game.

Clay Center swept Abilene, 12-10 and 5-4, in a doubleheader to conclude the regular season that decided the league title. Freshmen Carter Long and Kyson Becker and junior Kaleb Becker were among CC’s key players. In the 5-4 win, CC scored four runs in the seventh to win the outright league title.

2021 Sports in Kansas 4A All-State Baseball