v 2021 Sports in Kansas 6A All-State Baseball Team - Sports in Kansas 
Warning: include(../includes/bodytag.php): failed to open stream: No such file or directory in /home/kansass/public_html/ks/news/index.php on line 36

Carson Liggett helped Blue Valley to the 6A title and will play at Louisville. 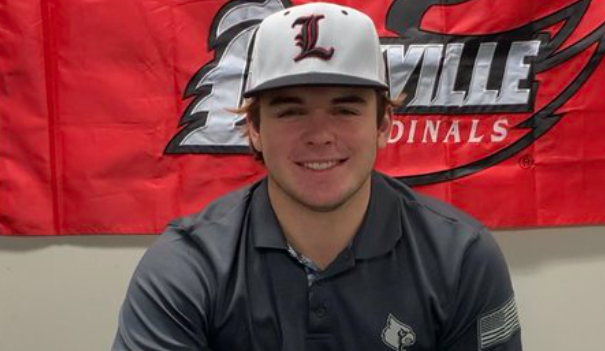 2021 Sports in Kansas 6A Baseball Player of the Year

In addition to the 6A SIK honor, Olathe East’s Grant Strong also earned 6A Player of the Year by the Kansas Baseball Coaches. He collected first team all-state outfield. The left-handed hitting Strong hit three homers in the regional semifinal. Notably on April 15, the left-handed pitching Strong delivered a fine outing on the mound and hit a 400-foot home run. Strong, who plays on the Kansas City Royals Scout Team, has committed to play baseball at Illinois. Strong is 6-foot-3, 215 pounds and was OE’s only starter back from 2019.

He was one of 12 seniors on Olathe East’s roster this spring. Strong earned first team all-Sunflower League for the outfield and pitcher. Olathe East lost to Olathe West in the regional championship game in a game that Strong was ejected for contact at the plate in a very questionable call. In his first at-bat in the regional final, Strong hit a line drive off the left-center wall.

Sports in Kansas 2021 6A Baseball Pitcher of the Year

Blue Valley’s Carson Liggett, who will play for Louisville at the next level, served as the Tiger ace en route to a Class 6A state title. Liggett pitched in 13 games with 11 starts. He had a 9-0 record in 61 innings with 24 hits allowed. Liggett posted a 92/17 strikeout to walk rate with a 0.80 earned-run average and a .672 walks plus hits per innings pitched (WHIP). Liggett threw 61 of the team’s 168 innings.

Liggett had multiple high-profile performances. On April 3, Liggett posted eight innings with 13 strikeouts. On May 4, he had seven innings and 13 strikeouts. Overall, Blue Valley posted a 1.73 team ERA and 1.05 WHIP. Luke Johnson had a 6-1 record and 1.00 ERA in 42 innings. Two years ago, Liggett delivered a 2.70 ERA with 48 strikeouts in 33.2 innings pitched.

The 6-foot-1, 205-pound right-handed Liggett has committed to Louisville. He played in the KBAC All-Star Game and earned 6A Pitcher of the Year by the Kansas Baseball Coaches. Liggett and Blue Valley Southwest’s Ben Kudrna were Eastern Kansas League’s co-Pitchers of the Year.

2021 Sports in Kansas 6A Baseball Coach of the Year

Blue Valley coach Tony Scardino continued his terrific career with a 23-2 record and Class 6A state title. BV set the school record for victories and bested the 22-3 mark and state crown from ’18. Like many of the state champions this year in baseball and softball, Blue Valley had a sizable turnaround from 2019. That season, BV went 14-8 before the COVID-19 pandemic last spring.

Scardino won titles with Blue Valley in ’17 with a 16-9 record, and then picked up the title in ‘18. He had assistants Tim Kennedy and Kevin Suhr on the state title teams in ’17 and ’18. Other than an 18-24 record in ’01, his first season as head coach, Scardino has never had a losing season.

2021 Sports in Kansas 6A All-State Baseball