v 2021 Sports in Kansas 5A All-State Baseball Team - Sports in Kansas 
Warning: include(../includes/bodytag.php): failed to open stream: No such file or directory in /home/kansass/public_html/ks/news/index.php on line 36

Kendall Diggs repeats as the 5A Player of the Year from SIK. (McKenzie Nelson) 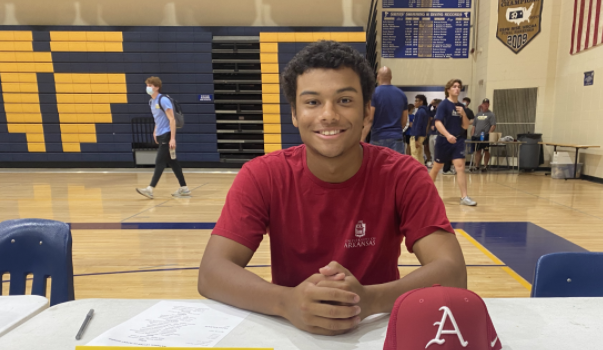 2021 Sports in Kansas 5A Baseball Player of the Year

St. Thomas Aquinas’ Kendall Diggs repeats as the Sports in Kansas Class 5A Player of the Year after he captured the award in 2019. Diggs has signed with University of Arkansas, which was ranked No. 1 this spring most of the college baseball season. In ’19, Diggs posted a .559 average with 41 RBI. This year, Diggs won Eastern Kansas League Player of the Year and 5A Player of the Year via the Kansas Baseball Coaches. Diggs had a huge senior season hitting .509 in the EKL with 17 runs, seven stolen bases, only struck one three times along with four doubles, two triples and 10 home runs, including a grand slam. He played varsity since he was a freshman. Diggs is considered a Top 400 draft prospect nationally.

He was ranked as Kansas’ top third baseman and fifth nationally by the Prep Baseball Report. Diggs was selected to play in the 2020 Perfect Game National Showcase.

St. Thomas Aquinas HS and St. THomas Aquinas Athletic Department would like to congratulate the baseball team on a successful season and also congratulate Kendall Diggs on earning back-to-back 5A Player of the Year in Kansas from Sports in Kansas. We are proud of you!

Sports in Kansas 2021 5A Baseball Pitcher of the Year

Blue Valley Southwest’s Ben Kudrna is likely the top Kansas’ draft pick for the Class of 2021. Hays High junior Dylan Dreiling is likely Kansas’ top player for Class of 2022. This year, both players performed at an elite level. Dreiling was in strong contention for either 5A Pitcher or Player of the Year.

Kudrna, who has committed to LSU, is expected to be a first-round Major League Baseball draft pick this summer. He threw a dominant complete game in the 5A title game for Blue Valley Southwest. Kudrna worked seven shutout innings in a 2-0 finale win versus Andover Central. He struck out 11 with three hits and one walk allowed. He tossed 65 strikes among 91 pitches. Kudrna was co-Eastern Kansas League Pitcher of the Year.

The 6-foot, 180-pound left-handed Dreiling has committed to Tennessee, which just made the College World Series. Known for his excellent work ethic, Dreiling enjoyed a big freshman year before the pandemic cancelled last spring.

This year, Dreiling, a pitcher/outfielder, earned Western Athletic Conference Player of the Year. Dreiling helped Hays High to a 19-4 record and Class 5A third-place showing. HHS won its first state game since 2000. Dreiling posted a 9-0 record and 0.52 ERA, both single season school records. Known for his fastball, curveball and vintage changeup, Dreiling earned a state quarterfinal win versus Topeka Seaman. Overall, he pitched 54 innings and allowed just four earned runs. He struck out 94 against 23 walks. He tallied 18 strikeouts against Great Bend, which also set a school record.

Dreiling batted .430 (37 of 86) with two strikeouts, along with three homers and 24 RBI. In Dreiling’s two Hays High’s seasons, the Indians have lost just six games. As a freshman, Dreiling hit .323 with four homers, 21 RBI and 17 runs scored.

Dreiling’s grandfather Frank Leo coached Hays High for 39 years, including 576 victories. Leo last coached HHS in 2019 before longtime assistant Dustin Dreher, a great former player with Hays High and Fort Hays State, took over the program. Leo has coached the Hays Larks, a nationally known summer collegiate program, for 33 years and remains in that role. Dreiling is a rare high schooler who plays for the Larks. He also plays for the Tri-State Arsenal (now called G-Form Artillery), an elite national travel team.

2021 Sports in Kansas 5A Baseball Coach of the Year

Andover Central’s Grant Bacon is the lone baseball coach in the 19-year Jaguar history. Bacon is 307-130 in his career with 13 state appearances, including five state runner-ups: 2004, ’05, ’07, ’16 and ’21. Bacon has had coach Justin Charbonneau as an assistant all 19 years. Aaron Frey had coached more than a decade as an assistant in two stints – sandwiched around a three-year head coaching stint at Sabetha where he won two state titles. Andover Central also finished third in 2018.

The Jaguars captured its first league championship in four years and first regional plaque in three seasons. Andover Central had arguably the state’s biggest turnaround from 8-10 in 2019 to 23-2 this spring. Bacon earned AVCTL Division II Coach of the Year, shortstop Easton Elliott collected conference Player of the Year, and Alex Ronk was the league pitcher of the year. Elliott, Ronk and outfielder Jack Bell were first team all-state picks. Andover Central finished a win off the school record for victories from a 24-2 season in ’05.

Andover Central was the No. 1 seed in the 5A state tournament. The Jaguars defeated St. James Academy, 6-0, and then beat Hays High, 6-4, in the semifinals. For the championship, AC fell to Blue Valley Southwest, 2-0. BVSW had multiple Division I signees, especially with the pitching staff. Elliott signed with Johnson County Community College, Ronk with Labette County CC, and Bell with Coffeyville CC. Andover Central outscored teams, 148-57, and went 9-0 in true road games. AC split with Derby on April 9 and lost 7-2 in the season’s second contest, and then didn’t lose until the state championship game.

Elliott hit .443 with five triples and 26 RBI with 36 runs scored. He tied the school records for single season runs scored and triples. Andover Central hit just one homer as a team and collectively carried a .315 team batting average. AC, though, stole 86 bases. Ronk pitched 39 innings in 16 games (three starts) and finished 4-1 with seven saves. He allowed just two earned runs for a 0.46 ERA. AC had balanced pitching with a 2.15 team ERA.

Andover Central had several comebacks, including down 3-0 and 4-3 against Arkansas City before a 7-4 win in nine innings. Andover Central dropped its team ERA from 4.05 in ’19.

In 2019, Elliott posted a .241 average, Bell had just five varsity at-bats and Buffington hit .162. Tabor was not in high school, and Blackmon was not on varsity. Ronk threw one varsity inning in ’19. They all had sizable improvements two years later.

2021 Sports in Kansas 5A All-State Baseball