v 2021 Sports in Kansas 2-1A All-State Baseball Team - Sports in Kansas 
Warning: include(../includes/bodytag.php): failed to open stream: No such file or directory in /home/kansass/public_html/ks/news/index.php on line 36

Tegan Cain of Ellis earned 2-1A Player of the Year from SIK. (photo: Rick Peterson Jr.) 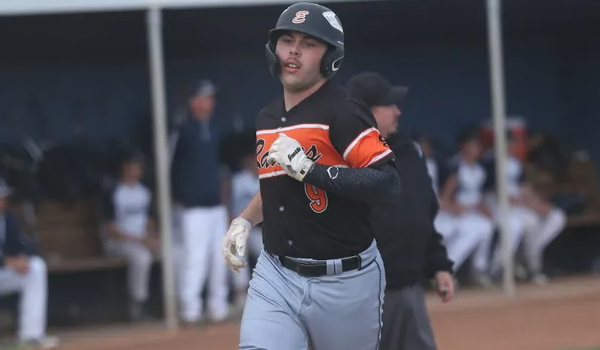 2021 Sports in Kansas 2-1A Baseball Player of the Year

Ellis senior Tegan Cain led the Railroaders to their second undefeated regular season in the last four played years. In ’17, Ellis had a perfect year until a state title game loss to Leon-Bluestem. This year, the Railers went through a challenging regional that included Inman (18-3) and Little River (16-4). Ellis finished 21-1 and took third in Class 2-1A. At state, Cain earned the quarterfinal win in a 5-4 victory versus Maranatha Christian. Tegan played for his father, Brent Cain.

Congratulations Tegan, ESBA is so proud and excited for you, and wish you norhting but the absolute best in your baseball career. We can't wait to make road trips to watch you at the next level. Congrats! - Lance, Javi, Jessica, Bret and Tara. Ellis Softball Baseball Association is proud to support Ellis HS baseball. Congrats on their success.

Sports in Kansas 2021 2-1A Baseball Pitcher of the Year

Sedgwick coach Doug Mabry noted to SIK that Sedgwick ace Nolan Crumrine regularly kept his pitch counts low. In the KSHSAA pitch count era, this allowed Crumrine to often pitch Friday in one week and then come back and pitch Tuesday the next week. The 5-foot-9, 165-pound Crumrine has signed with Friends University and earned 2-1A Pitcher of the Year by the Kansas Baseball Coaches Association.

A strong three-sport athlete, Crumrine is Sedgwick’s all-time leader in career and single season strikeouts and wins. He is second all-time in career hits behind Brylie Ware, who played at Oklahoma. Crumrine was also Sedgwick’s valedictorian and National Honor Society president. Mabry told SIK that Crumrine “does a great job” of mixing up speeds, eye levels and keeping hitters off balance.

The football program has long ranked as one of Kansas’ top offenses under coach Jeff Werner and went 8-2 last fall. Werner has more than 100 wins at Sedgwick football. Volleyball coach Karen Stucky has coached 18 seasons and won more than 470 matches. Baseball coach Doug Mabry entered this spring with 160 victories and a .739 career winning percentage.

This year, Sedgwick captured the 2-1A state baseball championship, the school’s first title in any sport since the 1953 basketball title. Sedgwick finished 25-1 with a 3-2 win versus Belle Plaine, a 7-6 victory against Spearville and an 11-1 win versus Valley Falls. Mabry believed Sedgwick had been “kind of building” toward this moment the last couple of years.

Sedgwick faced several deficits, notably in the state semifinals against Spearville when the Lancers took a four-run lead after the top of the first inning. Sedgwick scored two runs in the bottom of the first and eventually came back.

Mabry though this year’s squad was comparably talented to several recent Sedgwick squads. Mabry said the Cardinals’ composure and ability to stay calm was a separator between this team and past years.

Mabry and Sedgwick had to make significant adjustments just before and during the state tournament. Sedgwick outscored teams, 317-56, and finished the season with 14 consecutive victories.

Just before state, junior second baseman Blake Huebert went out with mono and couldn’t play. Blake had started all 22 games. However, Mabry has stressed depth throughout the season.

Freshman Jackson Scarlett made his first career start in the state quarterfinals and had his second career start in the state championship game. Mabry told SIK that Scarlett “did an outstanding job” with error-free play. Junior Jordan Hansen stepped in and played third against Spearville. Notably, he made a big force play at home with the bases loaded on a hot shot grounder.

Sedgwick had its stars with seniors Nolan Crumrine, Austin Wilkes and Burns, along with juniors Lance Hoffsommer, Austin Harjo and Connor Tillman. Hoffsommer led with a .540 average, while Harjo hit .521, and Crumrine was at .471. Burns delivered a .415 average, Tillman at .394 and senior Austin Wilkes at .391.

In the championship game, Burns went 4 of 5 as the leadoff hitter, and Hoffsommer permitted one run in five innings. Mabry and Werner both came to Sedgwick in fall of ’06. Mabry said the pair makes “a fantastic coaching team.” With rare exceptions, Werner has been head football coach and Mabry a lead assistant. The two then flip roles in the spring.