v 2021 Sports in Kansas 6A All-State Softball Team - Sports in Kansas 
Warning: include(../includes/bodytag.php): failed to open stream: No such file or directory in /home/kansass/public_html/ks/news/index.php on line 36

NiJaree Canady was named 6A SIK POY after leading Topeka to title. 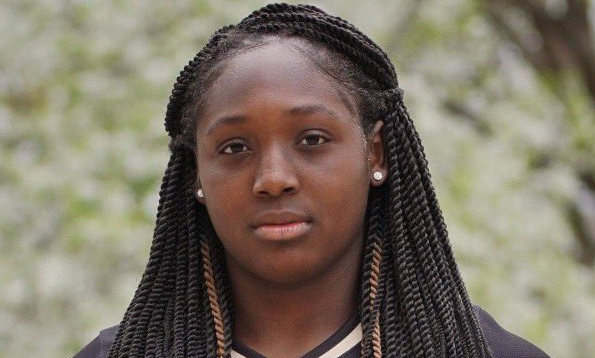 2021 Sports in Kansas 6A Softball Player of the Year

Two years ago, Topeka softball reached state for the first time in 14 years. Then a freshman, Topeka’s NiJaree Canady earned the regional championship win versus Garden City. Canady pushed through a painful turf toe injury. She was unable to pitch at state against Derby in a quarterfinal loss.

She went 21-0 with a 0.26 earned-run average with just 37 hits allowed. She struck out 232 batters in 109.1 innings. Canady, an elite basketball and softball player, is ranked as the nation’s No. 19 recruit in the Class of 2022 by Extra Inning Softball. In four postseason games, Canady permitted two unearned runs on seven hits.

In the three state games, Canady worked all 21 innings. She faced 83 batters and struck out 48 with 11 walks. She allowed just six hits, one unearned run.

In the state championship game, Canady struck out 16 in Topeka’s victory versus Olathe North. Canady hit .515 with 16 homers, 59 RBI and a 1.364 slugging percentage. Topeka became the first undefeated 6A squad since Olathe Northwest finished 25-0 in ’09, per KSHSAA archives. Before then, Olathe East went 25-0 in ’05.

Canady, Bruno and Lawrence Free State’s Tatum Clopton were the three first team Class 6A all-state pitchers. Clopton, who has signed with Oklahoma State, is a top-20 national recruit for the Class of 2021 and a former Gatorade Player of the Year. Free State’s Sara Roszak and Georgia Rea signed with Kansas and Western Illinois, respectively. Olathe North’s Allie Stipsits, a Hutchinson CC signee, also enjoyed a big year.

In basketball, Canady has helped Topeka finish state runner-up, undefeated COVID-19 Forever Four and state runner-up in three seasons. She was a consensus all-classes top-5 player in the winter. Canady averaged 20.6 points and 12.3 rebounds a contest. In 70 career games, Canady has 20 points and 11 rebounds a contest. Canady’s dad, Bruce, played college football at Washburn and had a brief professional career, especially with the Houston Oilers, in the ‘80s.

Sports in Kansas 2021 6A Softball Coach of the Year

Miles has led Topeka High to historic seasons. In ’19, Topeka reached state for the first time in 14 years. Topeka returned eight players with starting experience for 2021.

This season, the Trojans went 25-0 for the first softball title in school annals. It marked the first 6A undefeated squad since Olathe Northwest went 25-0 in ’09.

As well, Topeka ended a longtime Sunflower League stronghold on the 6A state title. Lawrence Free State won in ’18 and ’19 and returned most of its key players from those squads, including Tatum Clopton, Georgia Rea and Sara Roszak. This marked the first time a non-Sunflower League team didn’t win 6A since Washburn Rural in ’14. Before then, it was Maize in 2010. Topeka High swept Shawnee Heights, Topeka Seaman and Washburn Rural.

Before this year, Topeka was a collective 1-21 against Washburn Rural and Shawnee Heights with the lone win a 3-2 victory against Rural on April 18, 2012. Topeka swept Rural, 5-0, and 10-0 when Canady combined for 28 strikeouts.

Topeka High plenty of talent and experience with Zoe and Adisyn Caryl. Zoe, a senior catcher, has signed with Illinois. Adisyn, a shortstop, was Centennial League’s Newcomer of the Year. Those three were all first team all-Centennial League selections. As well, Canady, the Caryls and outfielder Mia Kelly were first team Class 6A all-state selections.

Entering state, Zoe Caryl carried a .747 average with 56 hits in 75 at-bats and reached base 66 times in 87 appearances. Topeka High gave Washburn Rural both of its regular season losses. The Trojans also won the Centennial League for the first time.

2021 Sports in Kansas 6A All-State Softball