v 2021 Sports in Kansas 4A All-State Softball Team - Sports in Kansas 
Warning: include(../includes/bodytag.php): failed to open stream: No such file or directory in /home/kansass/public_html/ks/news/index.php on line 36 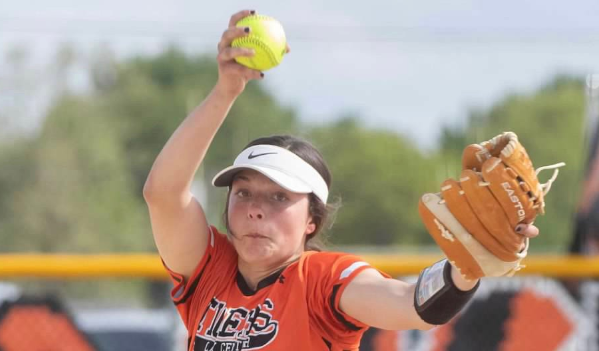 2021 Sports in Kansas 4A Softball Player of the Year

Edwards posted a 0.38 earned-run average and finished 16-2 in 111 innings. Her lone losses came against Wamego in the state semifinals and versus Holton in the third-place game. Against Wamego, Edwards allowed just one earned run with 13 strikeouts against one walk. Earlier in the season, Edwards had 17 strikeouts and zero earned runs permitted in 11 innings versus Wamego, a North Central Kansas League rival and eventual 4A state champion.

At the plate, Edwards batted .557 with 16 homers and 40 RBI, along with 43 runs scored. She walked 26 times and struck out on just five occasions. In five postseason games, Edwards walked six times in 18 plate appearances.

Congratulations to Clara Edwards and the Clay Center Tigers on an outstanding year. The Orange and Black Pack is a proud supporter of Clay Center Community High School Student Activities. We wish Clara the very best in her future at the University of South Dakota.  You have made our school and community very proud!

Sports in Kansas 2021 4A Softball Coach of the Year

Two years ago, Wamego softball was sub-.500 and had just one pitcher in Haley Asbury. This year, Wamego qualified for the state tournament. Meyer told SIK that Wamego “hadn’t got a lot of love most of the season” for the Red Raiders’ successful year. Entering state, Meyer did several interviews. The prevailing questions swirled around that Wamego was “kind of lucky” to be at state and whether the team was just “happy to be there.”

Meyer, though, knew Wamego had depth, speed and the resume to match up with the other 4A state qualifiers. Meyer used 15 players, including switching the catchers depending on who was pitching.

During the regular season, Wamego swept Rock Creek and split with Silver Lake, both 3A state qualifiers. Clay Center swept Wamego (3-2 and 9-3) on April 6, but the Red Raiders missed Asbury with injury.

Wamego played the state tournament with kind of a chip on its shoulder. The Red Raiders weren’t satisfied with just winning one game.

In the championship, Wamego held off longtime power Andale/Garden Plain, 6-2.  A/GP was the ’19 state runner-up, featured Division I signee Kyla Eck and had won four state titles from ’08-12. Top-seeded Holton had put together a dominant season, including multiple wins versus 5/6A Kansas City-area teams. Holton finished third to Clay Center. Wamego had the most losses for any 4A champion since ’06. The Red Raiders had a double-digit win improvement from ’19.

At state, Wamego hit just .176 as a team but put pressure on opposing defenses with its speed. The Red Raiders stole three bases, reached out three errors and made opportunities count. Against Clay Center, Wamego was down 1-0 after the first inning. Wamego scored two in the second on a walk, double, stolen base and ground out. In the final, Wamego scored six runs in the top of the first – and didn’t score the rest of the game. The Red Raiders took advantage of two walks, two errors and some timely hits.

Wamego never made an error on 72 chances in the state tournament. The Red Raiders walked just six batters.

Gallagher, a nationally ranked recruit for her class, was also the Manhattan Mercury’s Player of the Year. Wamego had seven seniors. Hoobler was consistently the first Red Raider at practice and the last one to leave. Hoobler, who Meyer labeled “the definition” of a server leader, has signed with Johnson County Community College softball.

The depth yielded a big offensive improvement. Two years ago, Wamego hit four homers. This season, the Red Raiders delivered 16 homers and hit .394 as a team.

Campbell hit four homers with team-bests in doubles (eight) and RBI (38). Gallagher went 13-2 with a 2.14 earned-run average. She pitched 89 innings with 111 strikeouts against just six walks. Asbury delivered 86 strikeouts versus 17 walks in 54.1 innings.

Gallagher picked up the state victories against Bishop Miege and Andale-Garden Plain, and Asbury earned the Clay Center win. She struck out 11 against three walks and just one hit allowed.

2021 Sports in Kansas 4A All-State Softball